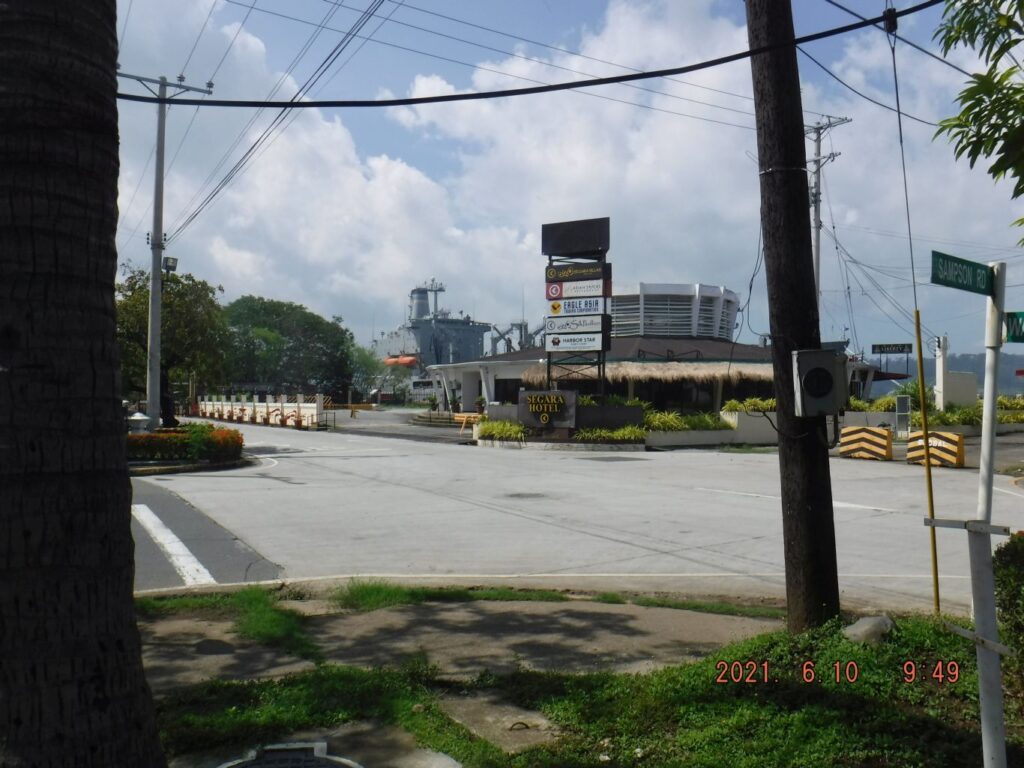 Zf173. U.S. Navy ship in Subic Bay on the 10th of June 2021. This is the first foreign Navy ship I saw in 7 month, since Nov. 21 2020 when I returned to the Philippines. Before I left the Philippines on the 19th of Nov. 2019, MSC ships came regular to Subic Bay, even Navy war ships including submarines.

So, seeing a Navy ship back in Subic Bay is news to me!

Zf174.  A closer look at the USNS Pecos T-AO 197 moored to the Alava Extension Wharf on the 10th of June 2021. It is a United States Naval Ship of the Military Sealift Command (MSC). Military Sealift Command (MSC), division within the U.S. Navy charged with delivering supplies to bases and ships worldwide through the operation of a wide variety of resupply, transport, and auxiliary ships.

Zf175.  The zoomed-in name of the USNS Pecos T-AO 197 moored to the Alava Extension Wharf on the 10th of June 2021 in the Subic Bay Freeport Zone (SBFZ), the former Naval Base Subic Bay.

Zf176. I checked the www and found this image in the Naval Task Force 71 Facebook page. Apparently the USNS Pecos T-AO 197 was operating with, supplying the TF-71 on the 8th of June 2021 in this greater neighborhood. The guard at the commercial circle (in the first picture) told me that the USNS Pecos arrived yesterday the 9th of June and he believes the ship will leave port this afternoon, the 10th of June.

The Commander of the Pacific Fleet (CINCPACFLEET) reports USS Charleston LCS 18 arrives in Manila on the 16th Aug. 2021. Here is the URL, click here: The below story and the three images came from this URL:

Zf242. MANILA, Philippines (Aug. 17, 2021) Sailors assigned to Independence-variant littoral combat ship USS Charleston (LCS 18) take on supplies during a stores onload as a part of a contactless port visit to Manila, Aug. 17. Charleston, part of Destroyer Squadron Seven, is on a rotational deployment operating in the U.S. 7th Fleet area of operation to enhance interoperability with partners and serve as a ready-response force in support of a free and open Indo-Pacific region. (U.S. Navy photo by Mass Communication Specialist 2nd Class Adam Butler)

The visit highlights the strong alliance, military relationship and renewed engagements between the Philippines and the United States.

In consideration for COVID-19 safety mitigation, the visit was contactless, meaning the crew of the ship remained aboard the ships, where they were afforded rest and replenishment of supplies.

The visits come weeks after Secretary of Defense Lloyd Austin’s engagement with Philippine defense officials, when the re-commitment was announced to the U.S.-Philippines Visiting Forces Agreement (VFA), which allows U.S. forces to operate from the Philippines for bilateral military engagements and in response to disasters or crisis.

The routine port visit is a continuation of the relationship as treaty allies, and furthers the friendship, partnership and alliance between the U.S. and the Philippines. The U.S. routinely participates in 300 bilateral engagements a year, from expert exchanges to ship visits, to component exercises and major training exercises such as Balikatan, Southeast Asia Cooperation and Training (SEACAT), and Maritime Training Activity (MTA) Sama Sama. These exercises signify joint commitment to peace and security in the Indo-Pacific region.

“Our U.S. Navy ships’ presence at sea and in ports like Manila promote security and stability that drives the peace and prosperity for the benefit of regional countries,” said Vice Adm. Karl Thomas, commander, U.S. 7th Fleet. “We appreciate the flexibility to resupply our ships in the Philippines, so that they are ready to support a free and open Indo-Pacific region.”

I wanted to explore around the Hanjin Shipyard, closed now in bankrupt procedures. The place has guards but I detected no other activities!

Parked at the bus parking, saw 2 buses there, touched base with the gate guards, and told them, I will walk along the wall outside. Found the trail that led to the old road to the wall and followed it the end. Saw a horse and rider coming my way; saw 3 houses on the other end, inland end. Continued walking, Hanjin Wall had expanded since my last visit, many years ago but I could not find a good trail going to the south river and a way to the ridge with road cuts across the ridge to the next valley. So, I gave up and returned.

Here are the URLs and 2 pictures:

More detailed information from an other site:

Zf342.-01 120627 National Hwy cut by Baloy Beach entrance. There are always a few people that don’t like us very much. But I think, not too many people pay attention to this. Recently the National Highway thru Barretto has been widened and this is the cut thru the ridge that runs to Baloy, so the new retaining wall was ideal for this graffiti.

Zf343.-05 210616 SBFZ, view to Cubi Point. This picture is shot from the SM Mall, Olongapo City side of the main gate bridge, about 7 stories high. SBFZ has been trying to replace, rebuild the main gate bridge to SBFZ (ex Naval Base) for some time. It has been several years now, something is not working right. Right inside the former base we see the Ayala Mall. If you go thru the trouble of looking at the picture in my Flickr album, high resolution, you will see the Philippine flag in front of HQ Building #299, a grain cargo ship at the former carrier Leyte Wharf and two container ships alongside the new Container Port at the actual Cubi Point where the Officer Beach used to be.

Zf344.-08 210730 SBFZ, PI Flag 2. I think this a historical picture; look at the large Philippine Flag on that very tall flagpole. The wind is from the south-west, like it supposed to be in the Monsoon Season. If you look close you can see the two shorter flagpoles to the left, that’s where ours and the Philippine Flags flew during the Base Days. Right is the former ours and the present SBFZ HQ Building #299. The low black marble wall, at left, is the Hell Ships Memorial.

I walk a lot; during the rainy season mostly in Barrio Barretto for exercise purpose. I average between 8 to 12 km; maybe 3 times a week. I take some random shots; I admit many shots are on the Barretto Beaches but the views of Subic Bay and SBFZ are nice. I gave each picture a short name to explain what we see.

I’m always surprised of a lot of activities on the weekends on the beach. Many of the hotels seem to be full, judging by the cars parked there. Things for me are normal; I can shop, eat and drink about anywhere. Only long distant travel is still a problem. In Barretto are still a few Girly Bars.

In my Flickr presentation are 42 images of Barrio Barretto and the Subic Bay Freeport Zone (SBFZ) in this June-September 2021 time frame. They are uploaded in high resolution. This is the URL, click here:

A shipmate sent me this picture (below here) on the 13th Nov. 2021. He said he could make out the Japanese Flag. He and I didn’t hear any local news about this ship visit and don’t know what the ship was doing here. I speculate they received supplies. We also wondered why there were no aircrafts on the flight deck.

Zf422.  This seems to be the Japanese carrier JS Kaga DDH 184 in Subic Bay Freeport Zone (SBFZ) on the 12th. Nov. 2021.  I reported earlier that the Japanese Ship JS Ise DDH 182 was operating in the South China Sea (called the Philippine West Sea, here in the Philippines) with other Allied Navies jointly with the US Seventh Fleet.

Zf423. This is a close up of the last picture; it does look like the number 184 to me. This picture also shows an U.S. Navy Military Sea Lift Command ship (MSC); both are moored (tight-up) at the Revera Wharf of the former U.S. Navy Ship Repair Facility (SRF) on the 12th Nov. 2021.

Zf424. This is a nice and clear picture of the JS Kaga DDH 184 from Wikipedia.

Since I returned to the Philippines in Nov. 2020, I noticed this new road cut from the SCTEX. Naturally I was interested to check it out and finally did it on the 12th of Dec. 2021. I parked on the Mabiga Road and off I went. I established this album in my Flickr account because one is able to do it in high resolution. I like this hiking because one is often rewarded with great views. No work was going on; this road project seems to be abandoned.

Here are 4 sample images in a smaller size.

Zf351. – 211212 Mabiga to Subic Solar Farm Road 08. This is the beginning of the road cut starting from the Mabiga Road and Mabiga River Valley. It is coming up this way. In the middle of the image we see Mt Arayat in Pampanga, and left is Mt. Malasimbo near Dinalupihan Town in Bataan.

Zf352. – 211212 Mabiga to Subic Solar Farm Road 12. Here is a view towards north of the lower section of the Cabusilan Mountain Range, it is the most prominent section of the Zambales Mountains

Zf353. – 211212 Mabiga to Subic Solar Farm Road 16b. This is more or less the Google Earth image as the last image but now it shows my GPS walking track.

Zf354. -211212 Mabiga to Subic Solar Farm Road 68a. This is an image of the Subic Solar Farm from their webpage. In this image we see Mt. Santa Rita, left and Mt. Malasimbo, right. This is the Surya Source Energy: web page, click here:

A local Subic Bay/Olongapo Hike; PLDT Mountain is the one opposite of the Sta. Rita. Mountain and has all the communication towers on to top.

At the start of the Battle of the Zig-Zag Pass, east of Olongapo, one regiment of the 38th Div. guided by Aeta men,  marched around the PLDT mountain from Olongapo to Dinalupihan to attack the Japanese defenders from the rear. That must have been a hell of a march with all the gear and weapons!

I walked this mountain before, a number of years ago. The dry season has started and is time to walk. I parked at the Roosevelt Barangay Hall, only about 50 meters from the start of the road up the mountain. The road up can be walked easy, it got little worse now at places. The new high Voltage Power Line being built caused the trail to go down to Payangan and San Paplo to be a dirt road now and so, it is now easier to walk now. It was a very good day to walk but a very bad day for pictures, a bad haze was hanging over this area. But here are some pictures anyway.

Here is one picture of that album.

Zf458. – 211222 PLDT Mt. to San Pablo, Garmin, big map. This my Garmin account map with my GPS track going up the PLDT Mountain in Barangay Roosevelt in Bataan.