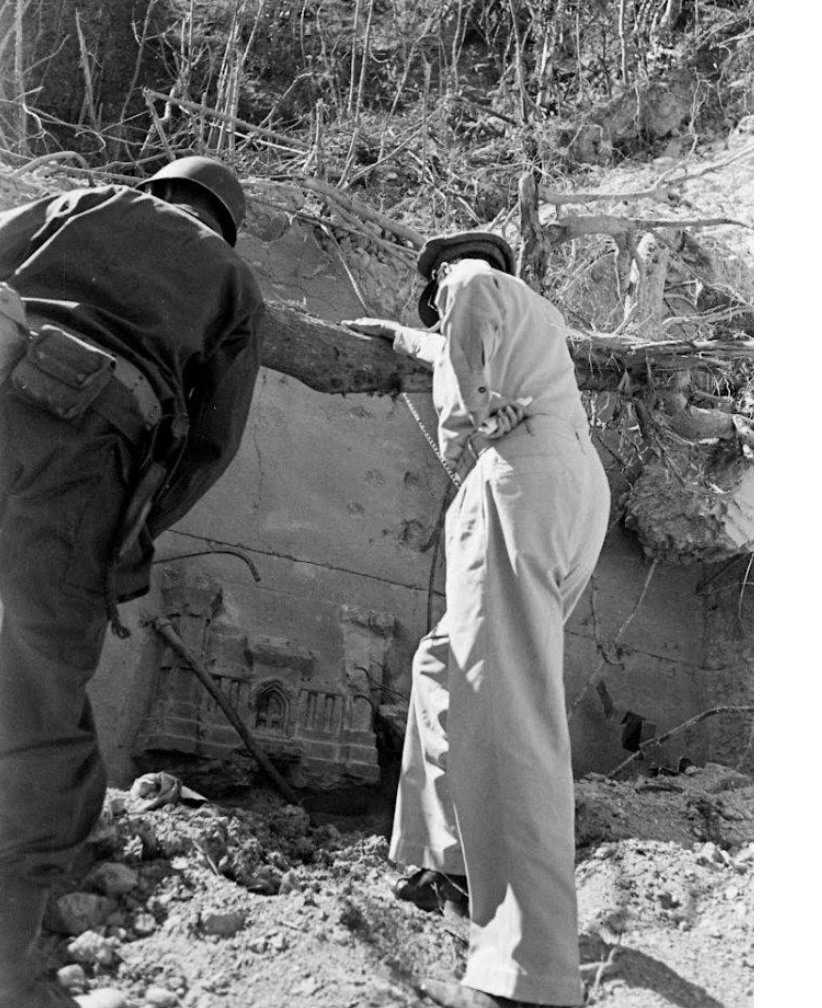 Zf856. Gen. MacArthur returns to Corregidor, image from Peter DeForest Facebook page, photo from Carl Mydans of the LIFE Collection. This picture shows Gen. Mac Arthur at the North Entrance of the Malinta Hill Tunnel, probably on the 2nd of March 1945 when he visited Corregidor and ordered the colors hoisted on the Old Flag Pole. Note how high the debris have piled up in front of the entrance from all the bombing, shelling and fighting to liberate Corregidor in Feb. / March 1945.

This Philippine Sailor webpage album is created to source these historical Malinta Hill Tunnel pictures to be shown in this Corregidor Forum webpage, page 1, called “The Malinta Tunnel”: click here:

The reason is because the original pictures were sourced in a Photobucket picture sharing account but the pictures were watermarked because Photobucket does not allow “Third Party Picture Sharing” anymore for free.

The above Corregidor Forum Malinta Tunnel webpage is such an outstanding research work on the creation and history of the Malinta Hill Tunnel on Corregidor by John Moffitt (user name “fots2”) that the pictures should be viewed without blemishing marks.

Some paragraphs from the above webpage also have been copied here to flesh out a story:

Along with the big guns, one thing that continually draws me to Corregidor Island is the “Malinta Storage System” commonly referred to as “Malinta Tunnel”. I have no idea why it fascinates me but I have spent hours wandering around the complex. No doubt part of the attraction is the ‘unknowns’ that even after collecting all this information still remain. In the past while searching for Malinta Tunnel information I rarely found more than a couple paragraphs and most of that was incorrect. I thought it was time to piece the scraps together for anyone else who may be interested.

While trying to research this subject, I encountered the usual cases of disagreeing information so what I present here is a summary based on what I understand to be correct. I consider the most reliable information to come from the US Army’s ‘Corps of Engineers’. This includes correspondence, official blueprints and Records of Completed Works. These are factual records recorded by Army Engineers as the work progressed. Various books were a secondary source.

By far the biggest (and widely accepted) misconceptions are the tunnel construction dates. Numerous internet searches plus books and articles state that the Malinta Tunnel was built during the ten year period between 1922 and 1932. These dates are also quoted daily to tourists who visit the island. I can see where this idea may have come from though. One of the tunnel entrances has these dates stenciled on it. The source of this information is unknown. 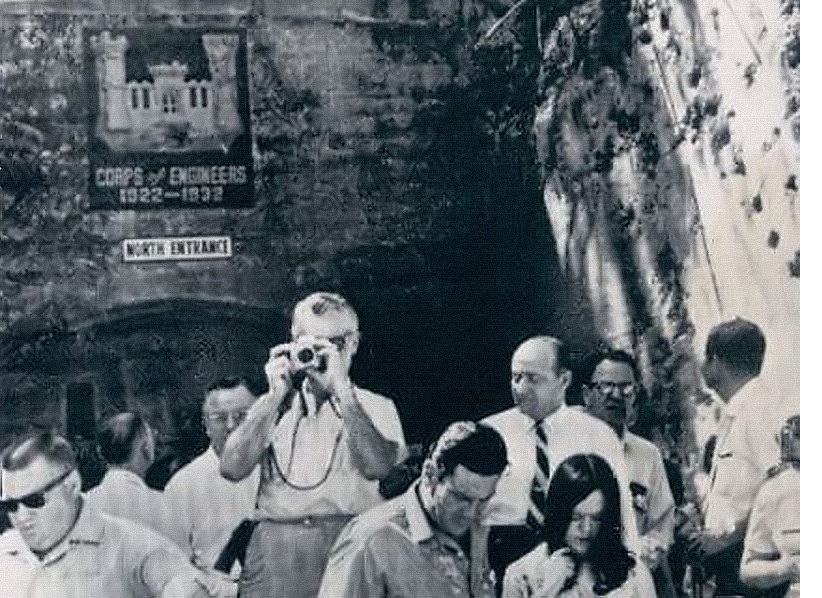 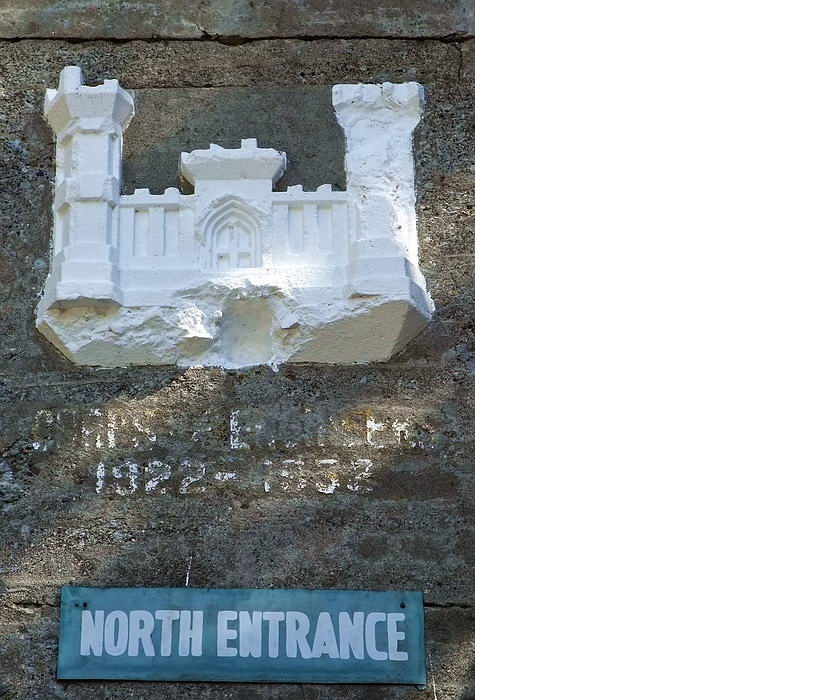 Zf858 A photo of the same partially repainted entrance taken 2010. 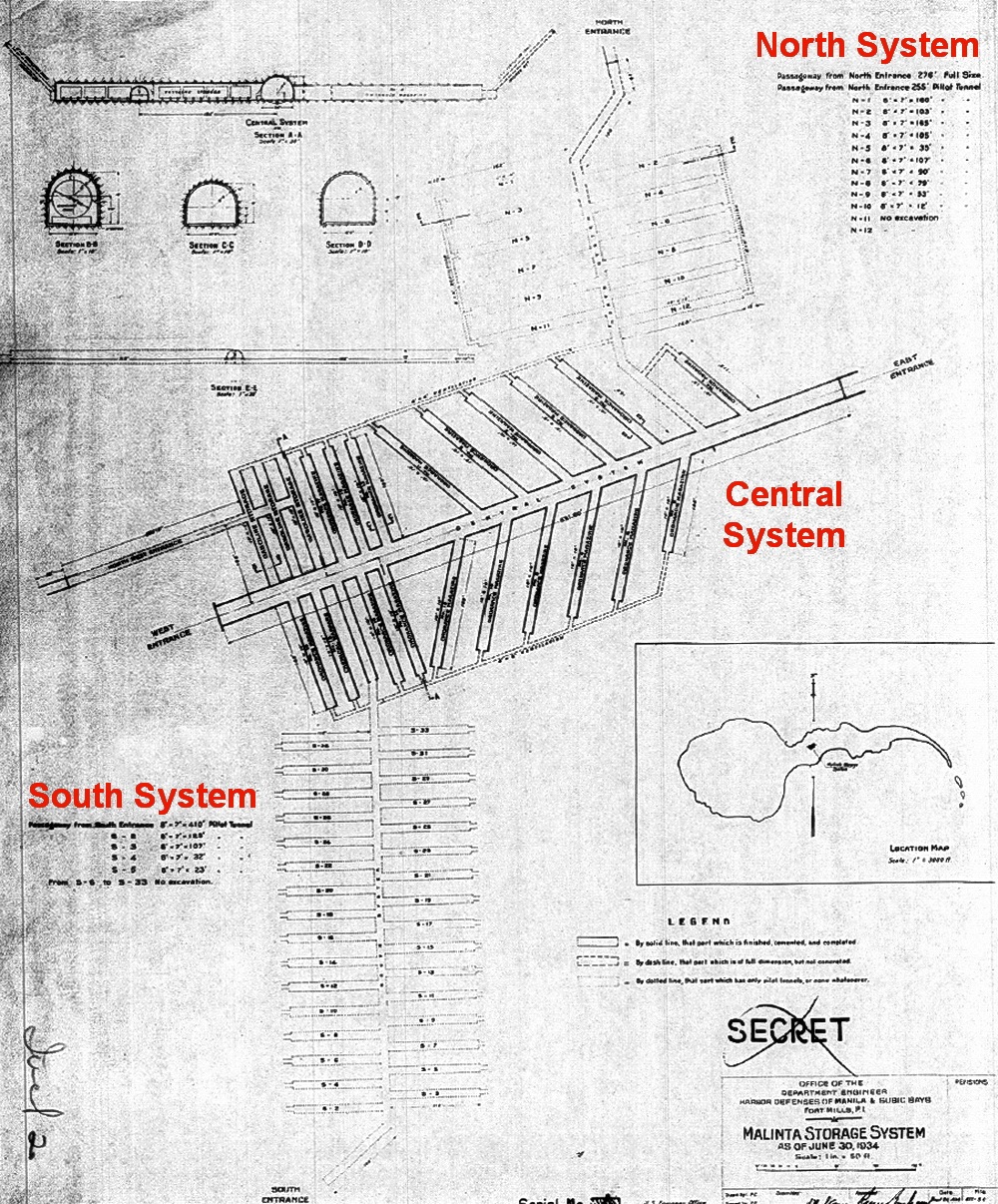 To get the ball rolling, tools, manpower and explosives were necessary. Baguio gold miners provided some advice and old equipment. General Kilbourne negotiated with the Philippine Government for the use of prison labor and hundreds of them were shipped to Corregidor. As long as he fed them, these ‘Bilibids” were his. The barracks area up the hill just west of Bottomside was converted into a secure location for their quarters. The Corregidor 1932 map labels this area as a “Military Stockade”. (Earlier 1921 and 1929 maps do not show a stockade here). Finally, the problem of obtaining explosives turned out to be any easy one to solve. Condemned TNT was located in the US which was gladly shipped to the Philippines. 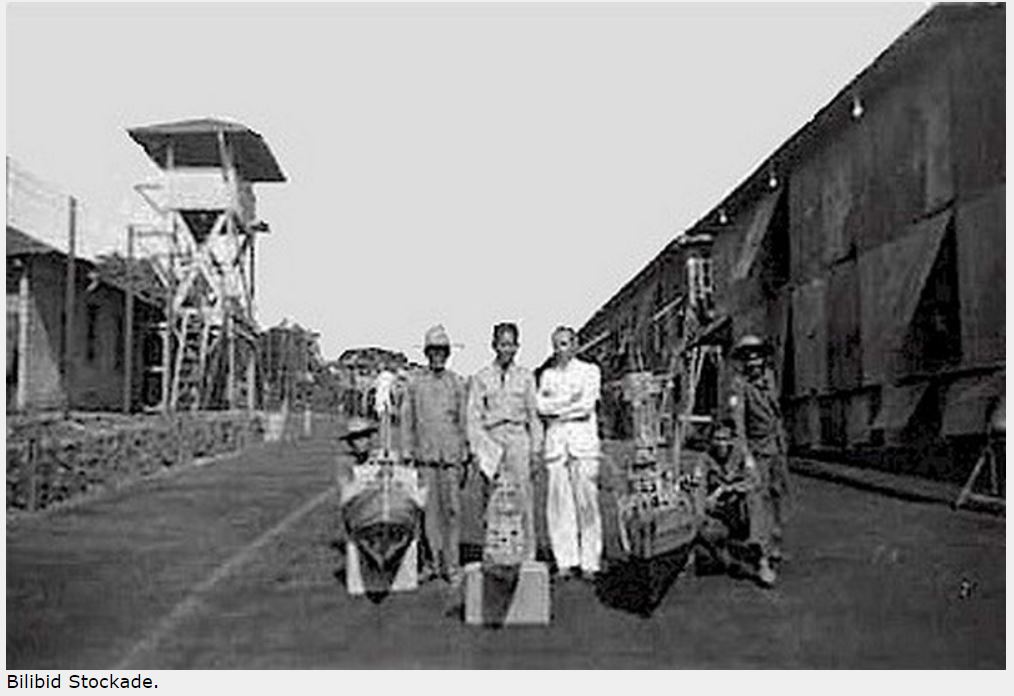 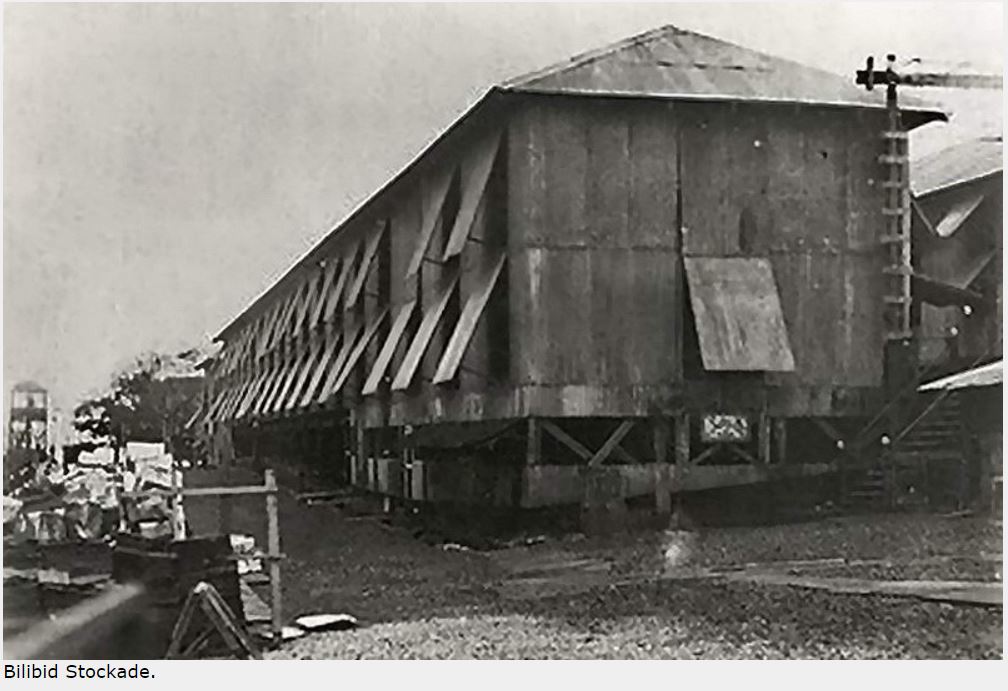 Wouldn’t it be great if we could speak to the man in charge of constructing Malinta tunnel to get the real story? What could be better than that? Well, we don’t need to, he wrote an account of his Corregidor experience and it is available on Corregidor.org. This officer, Lt. Paschal N. Strong of the US Army Corps of Engineers, arrived in the Philippines in 1932 and was promptly put to work; click here:

For the 831.6 ft. long main shaft, work commenced simultaneously from both the east and west entrances. This dome shaped shaft had a minimum size of 18 ft. high and 24 ft. wide. Initially the tunnel was unlined. It would also accommodate dual trolley lines. When the two work crews met, the shaft sections lined up within inches of each other. The year was 1932 which was recorded above both tunnel entrances. 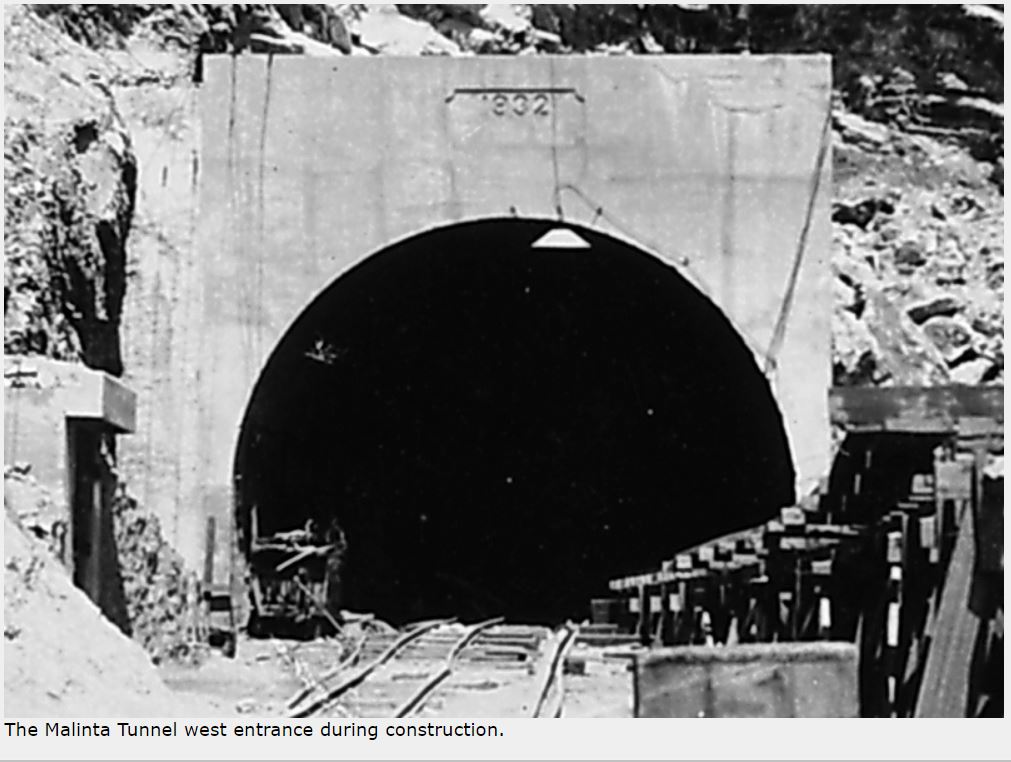 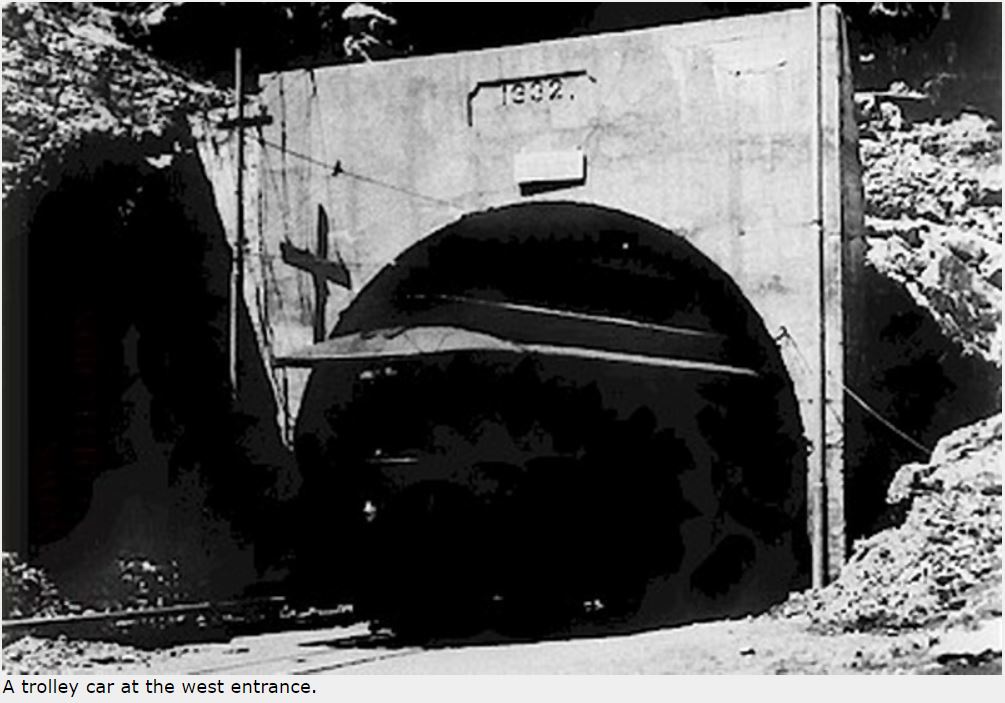 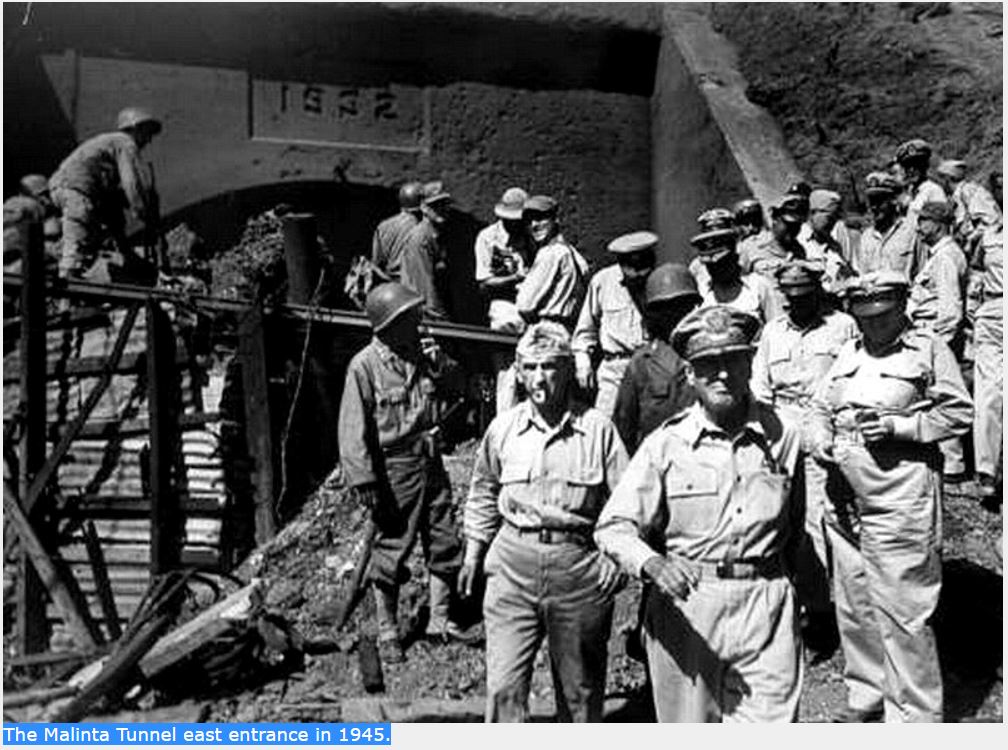 Soon large chunks of flaky rock began falling from the ceiling throughout this unlined tunnel. The new Harbour Defense Commander, Brig. Gen. S D Embick, decided in April of 1933 to line the main shaft and laterals with concrete. He was able to acquire sufficient funds so his staff went shopping. The source that quoted the lowest price including shipping to the Philippines was Japan. On June 30, 1934, the Corps of Engineers issued a Report of Completed Works (RCW) reporting that the central system including the main shaft and adjacent laterals were complete. 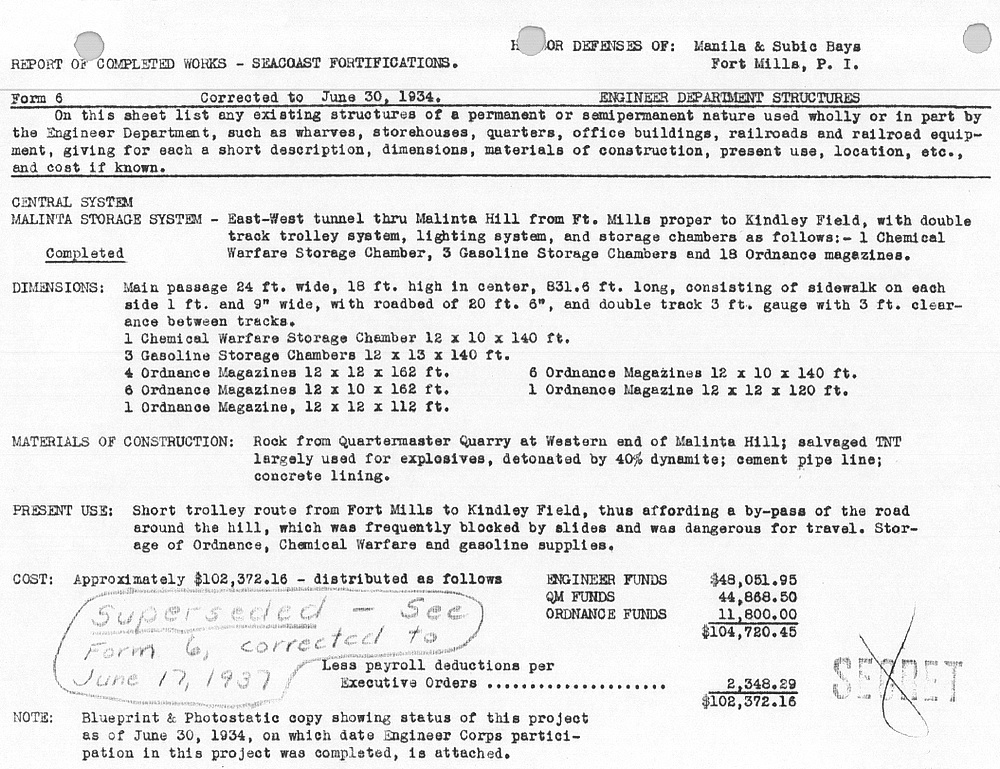 Meanwhile, work was also progressing on the North and South Systems. As of June 30, 1934, the status of the North System was as follows: the main 531 ft. long north-south shaft had been excavated from the Malinta central tunnel to the North Shore Road. Roughly half its length was still a pilot tunnel but the rest was full size. Of the 12 laterals, 10 were partially dug pilot tunnels and the final 2 had yet to be started. Additional work to be completed involved 2 ventilation shafts at the rear of all laterals and 2 exterior ventilation shafts out to the hillside. Only the 12 laterals would be concrete lined. It would be another three years before the North System was reported as complete on May 26, 1937. 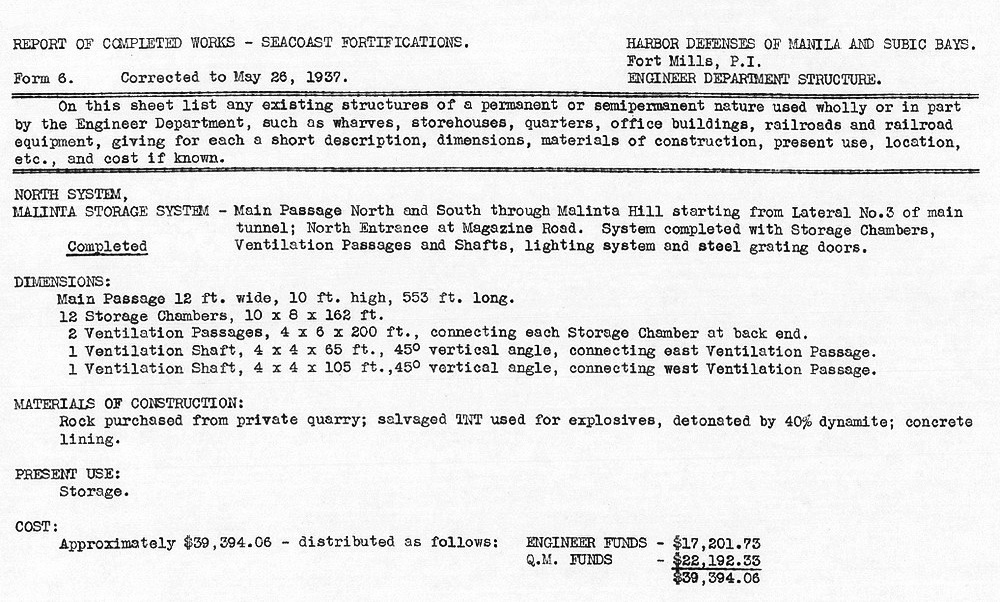 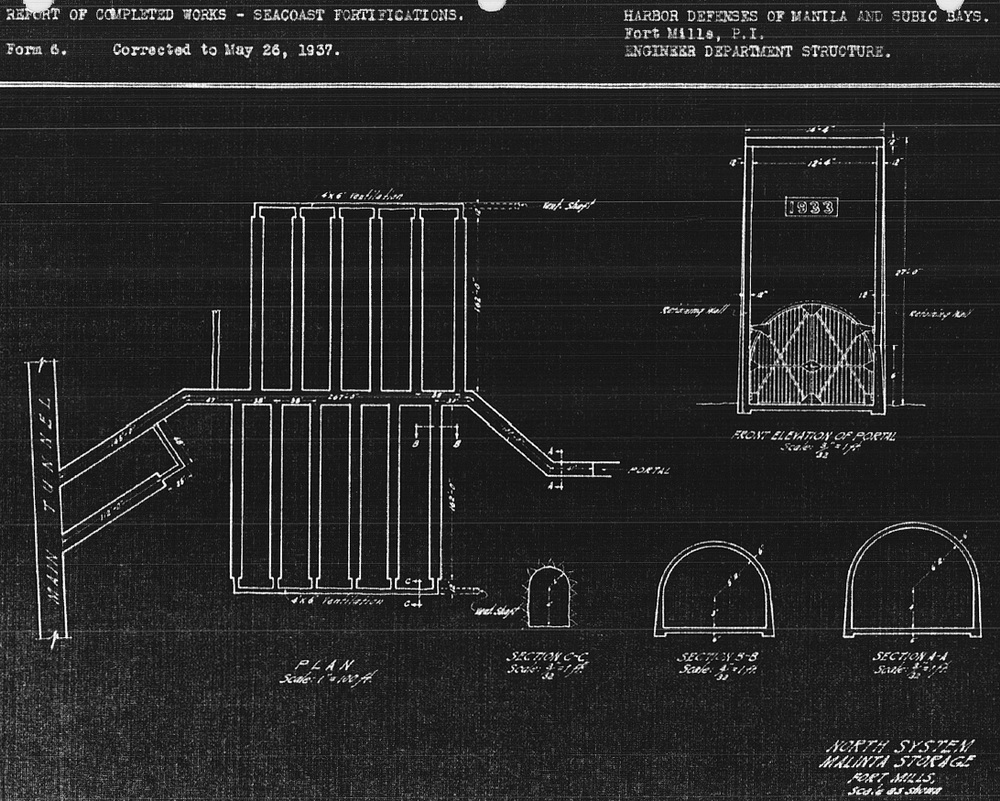 As war approached, the transformation of the North System from the purpose of storage to a hospital took place. According to the book; THE CORPS OF ENGINEERS: THE WAR AGAINST JAPAN, this work was commenced in July of 1941. Major tasks were the enlargement of two rear ventilation shafts beyond their original 4 ft. x 6 ft. sizes plus the addition of water and sewage facilities. Along the floor of both ventilation shafts you can see a drain pipe that runs the full length of them. At the north end of both shafts, horizontal mini tunnels were dug extending the drains to the outside. Today the eastern one is collapsed but the western one still exists. A drain pipe can still be seen embedded in the floor of that small shaft. 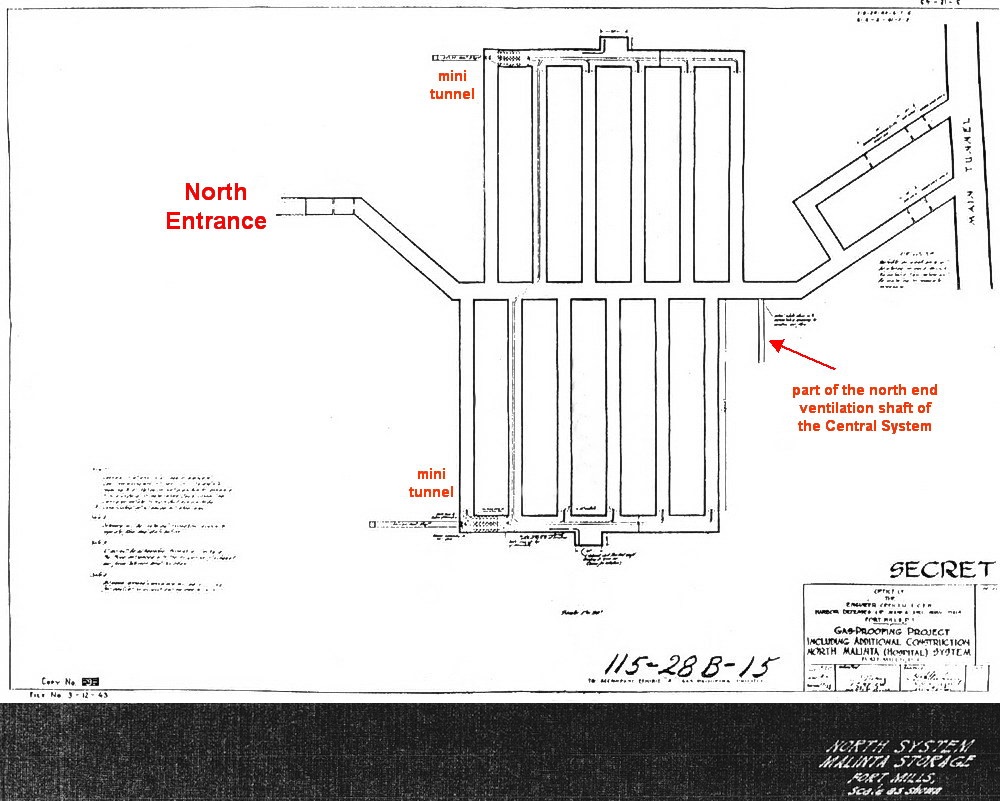 Zf868. Hospital. Unfortunately most of the text on this drawing is unreadable but it clearly shows the outline of the hospital tunnel that we see today. It is labeled “GAS-PROOFING PROJECT INCLUDING ADDITIONAL CONSTRUCTION NORTH MALINTA (HOSPITAL) SYSTEM.” The date of the drawing is not clear.

The next area of the Malinta Tunnel complex to be mentioned is known as the Gasoline Tunnel. Located at the NW corner of the Malinta Central System, it consisted of 6 laterals containing large metal storage tanks for gasoline (20 x 8,000 gal. tanks). A central shaft from the laterals ran east-west out to the west side of Malinta Hill. There was one ventilation shaft out to the hillside and with the exception of the rear ventilation shaft, the tunnel system was fully concrete lined. The 1934 map shows the Gasoline Tunnel to exist at that time but it must have been incomplete. Above the tunnel’s concrete entrance was a date of 1934 but the RCW released by the Corps of Engineers was not issued until August 4 of 1936. 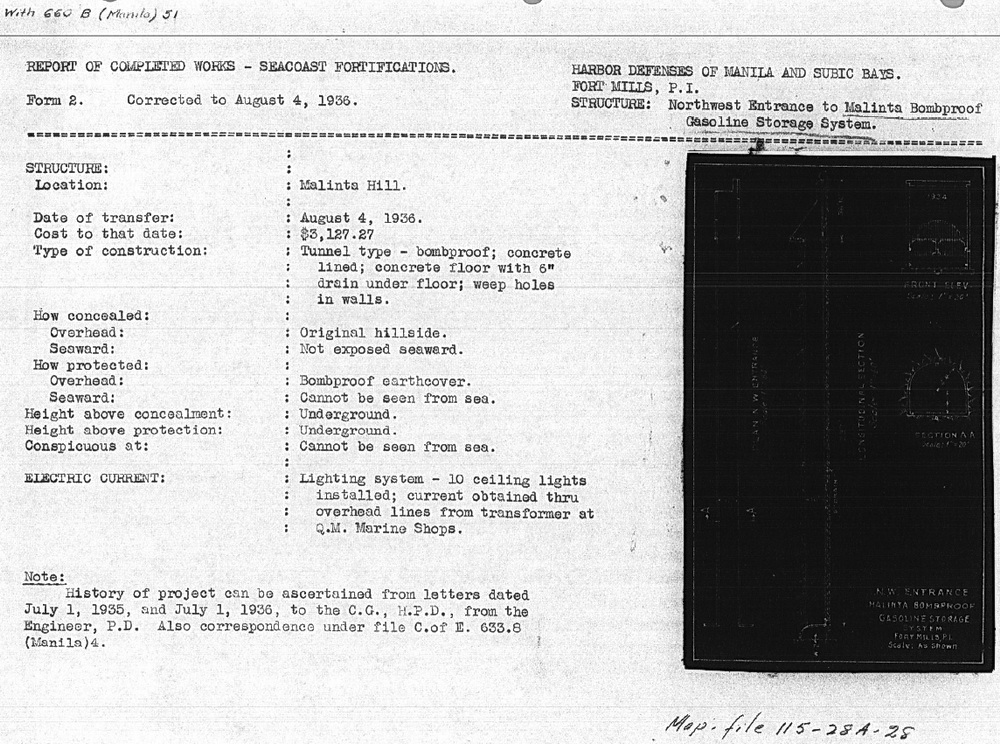 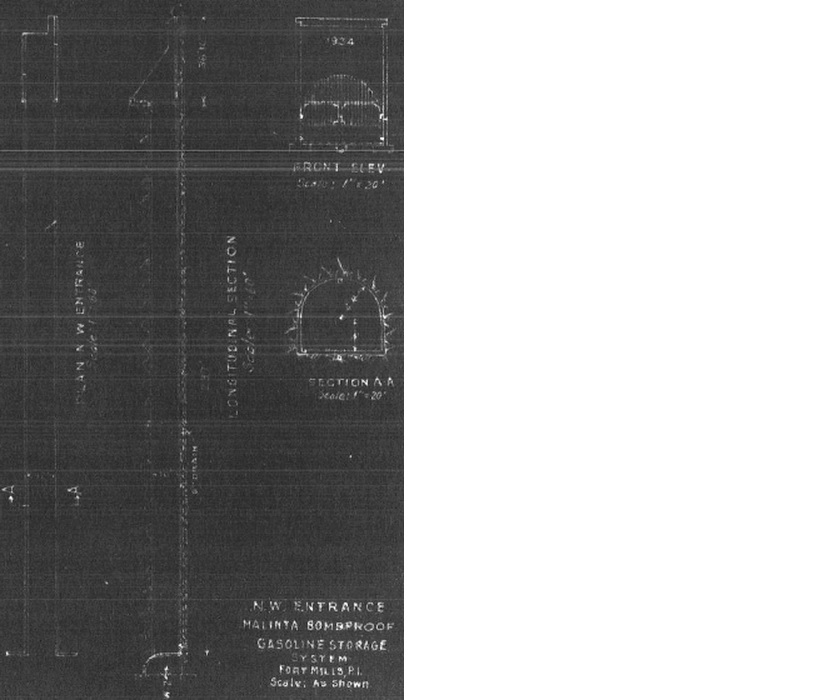 The RCWs indicate when construction of all sections of Malinta Tunnel were completed with the exception of the South System. I have no RCW for it. Is this simply because (1) I do not have that document, (2) it is lost in some archive or (3) it never got issued by the Corps of Engineers. Additional construction was obviously completed and there may have been periods of inactivity but I know that work continued in the South System even up until wartime. Reason #3 may be correct in that work never really ceased here. The last detailed map that I am aware of is dated July 2, 1940. As of that date, eleven South System laterals were partially complete. 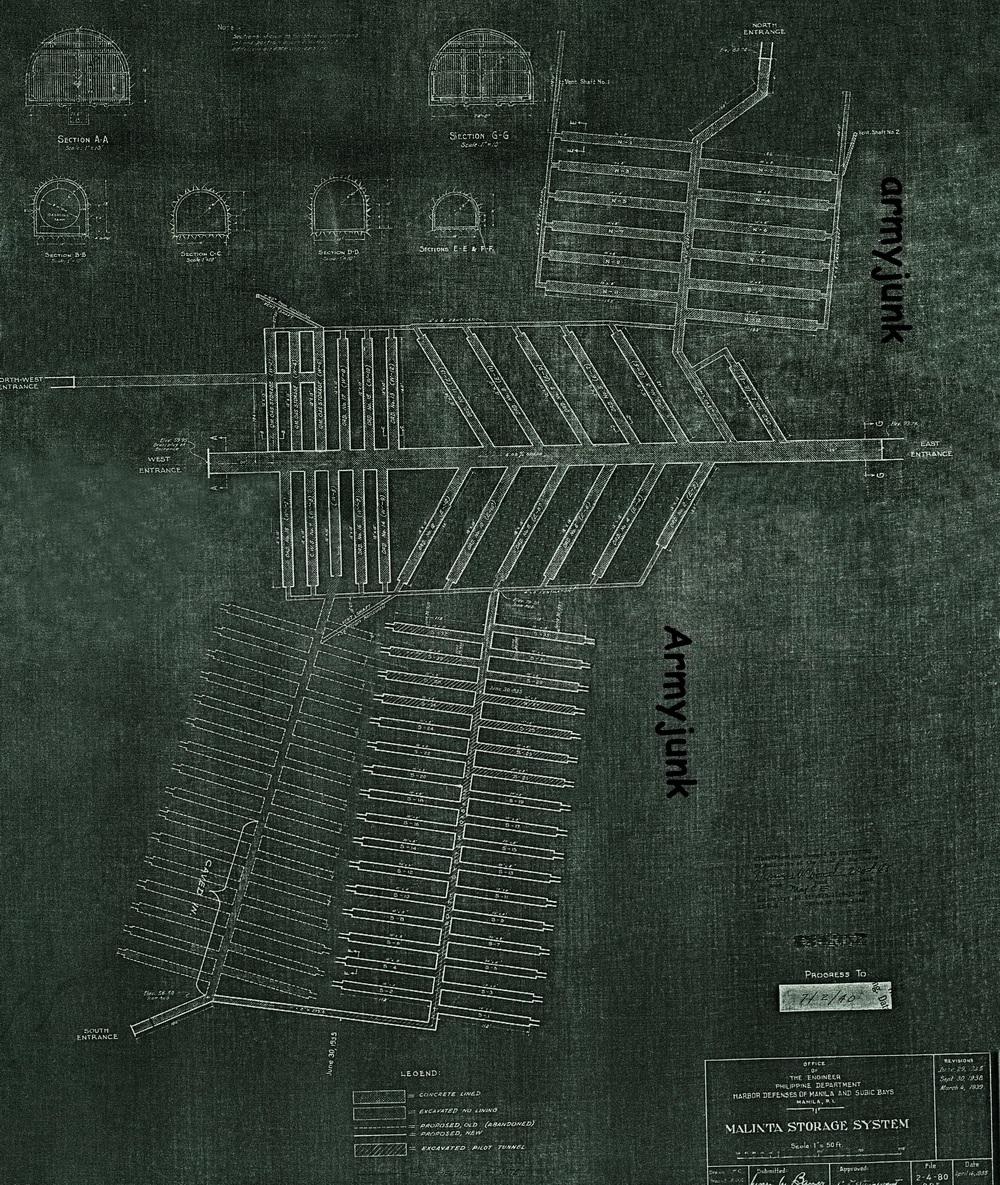 Zf871.  This detailed map dated July 2, 1940 is interesting as it overlays the old and new location of the South System and gives an overall view of the whole complex. (map courtesy of armyjunk).

In 1941 with war approaching, Washington’s purse strings were starting to get loosened and long delayed projects found approval. One such project was for the gas-proofing of Malinta Tunnel. Over a half million dollars was allocated for this however very little material arrived before the start of the war. According to the book “THE CHEMICAL WARFARE SERVICE: CHEMICALS IN COMBAT”, the only portion of this project to get completed was the installation of blowers for ventilation.

If you omit the missing ‘new’ south entrance and the Hospital mini tunnels (and a few other minor details) then the 1940 blueprint is an accurate depiction of the Malinta Tunnel we know today. 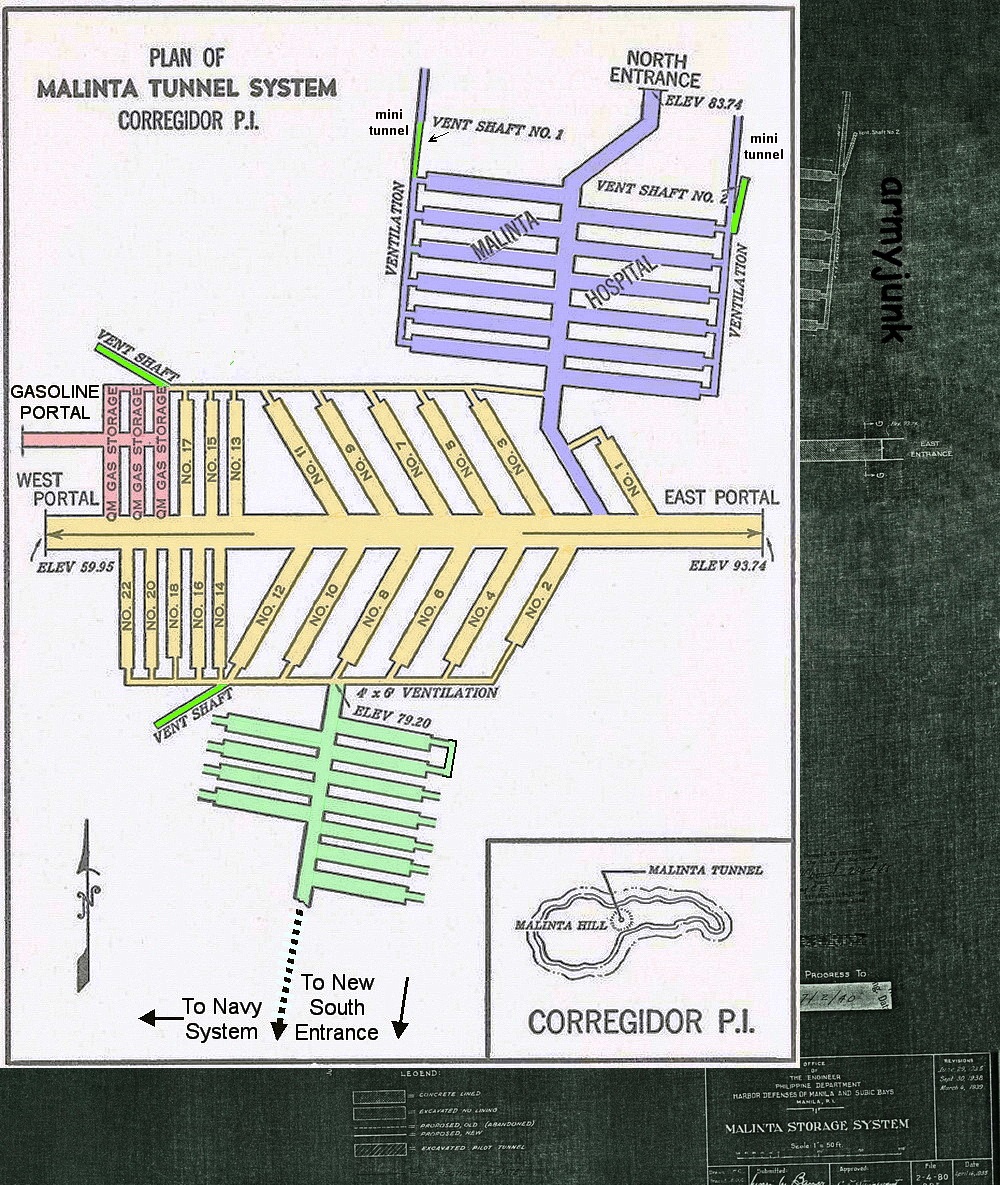 Zf872.  The above map is a good overview of the Malinta Tunnel System. There are minor errors but it is generally correct. (Modified map from ‘The Hard Way Home’ by Col. William C. Braly)

In the spring of 1941, Maj. Gen. George F. Moore became the Harbor Defense Commander. It was under his watch that Malinta Tunnel would be put to the use that it was intended for twenty years earlier. Probably the most fitting tribute to this tunnel complex came from him when he said “Without the shelter afforded by the Malinta Tunnel…organized defense of the Philippines would have collapsed in its early stages”.

For me, Malinta Tunnel will always be one of the most interesting places to visit on Corregidor Island. Stories of hidden gold and ghosts have nothing to do with it. I should note that the information written above speaks only of cavities carved into the rock; there is no mention of the few thousand people who either temporarily lived here or who died within these passageways. History is the real attraction and it lurks everywhere you step.