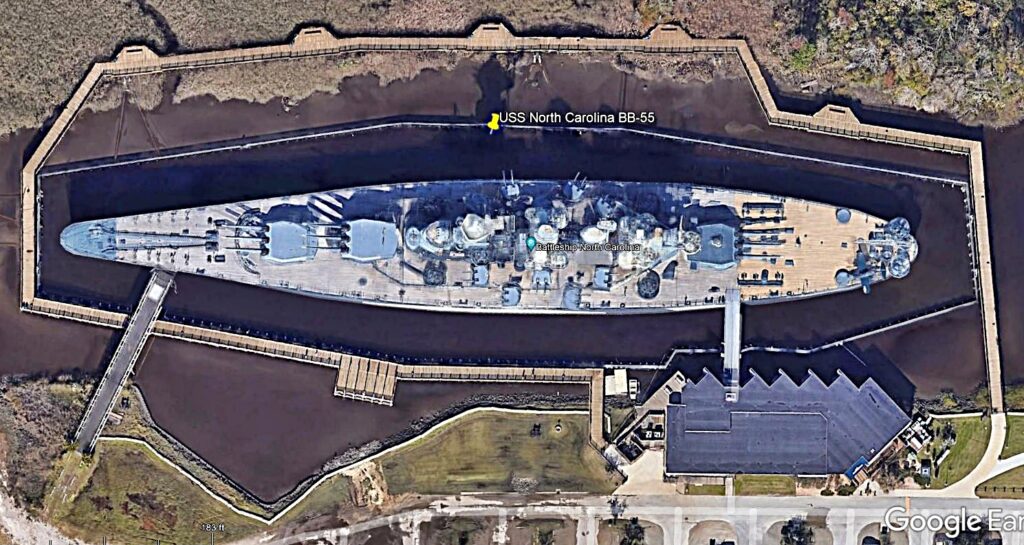 This page was started to offer Navy tidbits, general Navy stuff that did not get its own webpage.

My friends, the Army Lt. Chester K. Britt Research Team, doing research came across the above picture, the below information and shared it with me.

Zf496. This date, 1941 6 12, the BEAVER CITY NB TIMES reports about the first battleship commissioned since 1923 at Brooklyn Navy Yard and that it was built without portholes.

In their research, the wife of the person, subject of their book, Grace Britt was evacuated from the Philippines on May 5, 1941, on the Army Personnel Transport Ship, USAT Republic and arrived at the Brooklyn Navy Yard on June 11, 1941. She probably saw the USS North Carolina there.

Relentless Hope: A True Story of War and Survival, by David L. Britt

USS Kitty Hawk today started her final voyage from Bremerton to a scrap yard in Texas.

Zf499. This is an USS Kitty Hawk image in the Naval Institute Facebook page of Jan. 16 this year (2022). The picture prescription says this:

USS Kitty Hawk today started her final voyage from Bremerton to a scrap yard in Texas, 16th Jan. 2022. Built for $264 million in 1961 ($2.5 billion in 2021), the Kitty Hawk was sold to the scrap company for the bargain price of 1 cent. For another penny, the company also got USS John F. Kennedy. 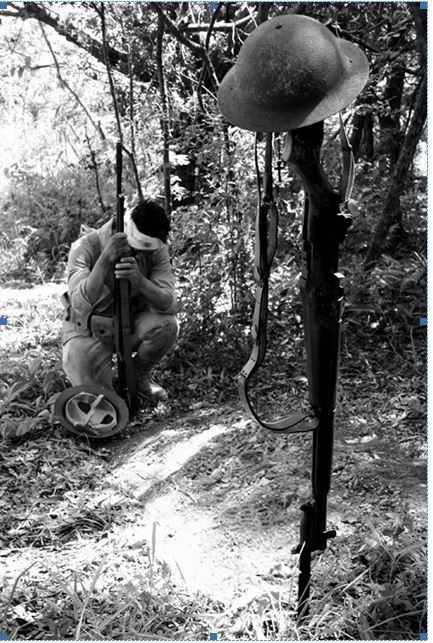 Zf648. Dramatized photo of a Philippine Scout in Bataan mourning a fallen comrade. Photo staged and taken by reenactors of LRRP-HK Airsoft Team, 2009.

The future USS Telesforo Trinidad (DDG 139) will honor Fireman 2nd Class Telesforo De La Cruz Trinidad, the only Filipino in the U.S. Navy to be awarded the Medal of Honor.

Trinidad was born November 25, 1890, in Aklan Province, Panay, Philippine Islands. On January 21, 1915, Petty Officer Trinidad was serving aboard USS San Diego when the captain decided to conduct a four-hour full-speed and endurance trial to determine if the ship could still maintain its officially rated flank speed. Following the trial, an obstructed tube in one of the ship’s boilers gave way, creating a chain reaction. Trinidad re-entered the closed space to the No. 2 boiler to save Fireman 2nd Class R. W. Daly. As he was carrying Daly through the No. 4 fireroom, an explosion of No. 3 boiler hit Trinidad, which burned him in the face. After seeing Daly to safety and despite his injuries, Trinidad then assisted in rescuing another injured shipmate from the No. 3 fireroom. For his bravery, the U.S. Navy awarded him the Medal of Honor. 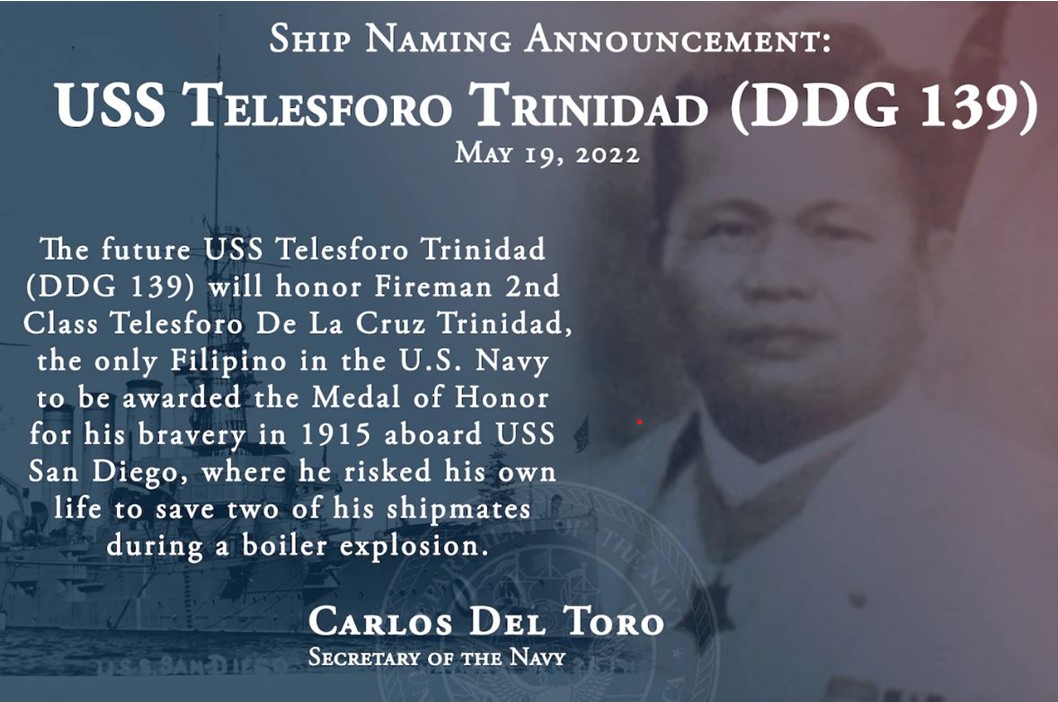 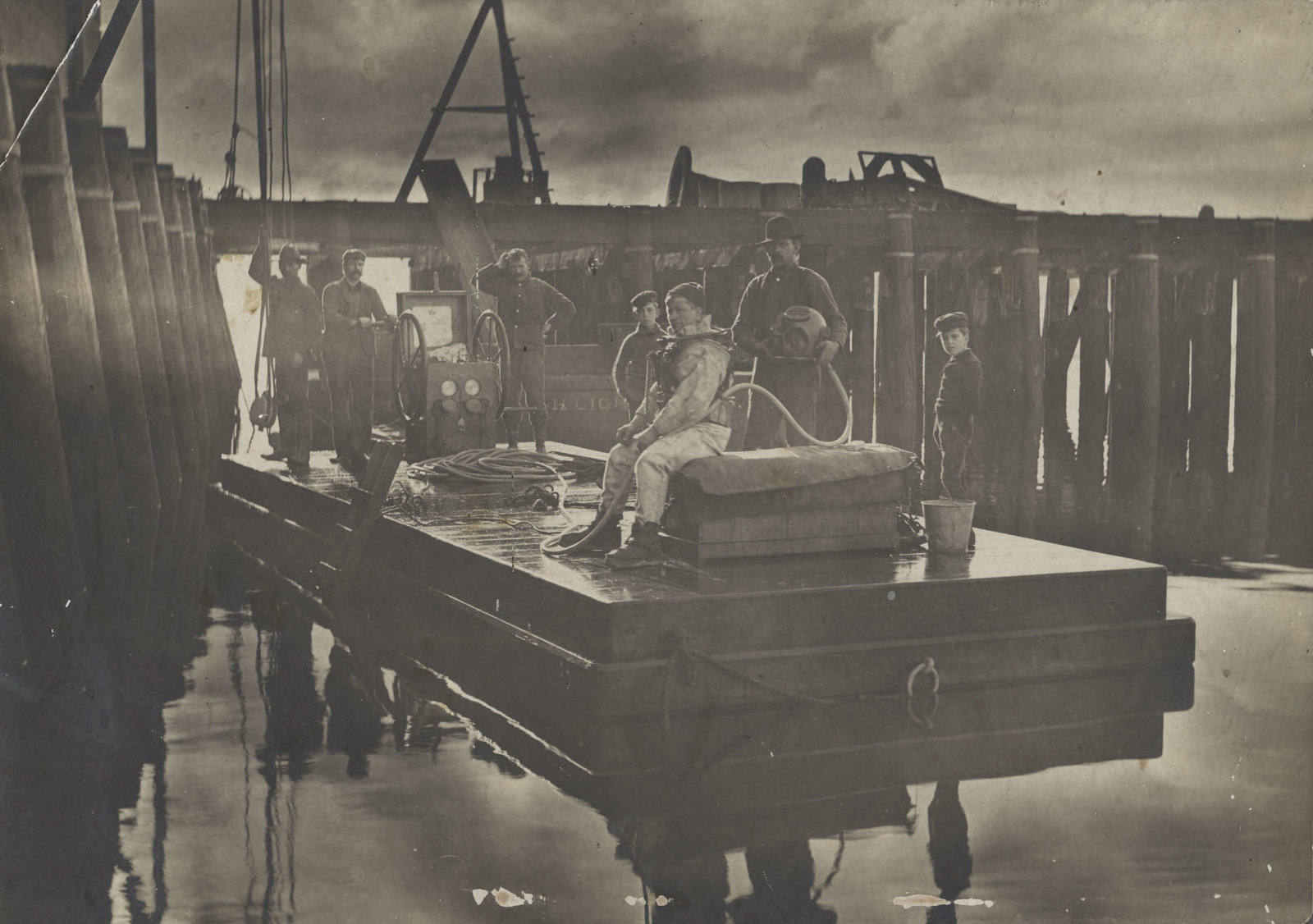