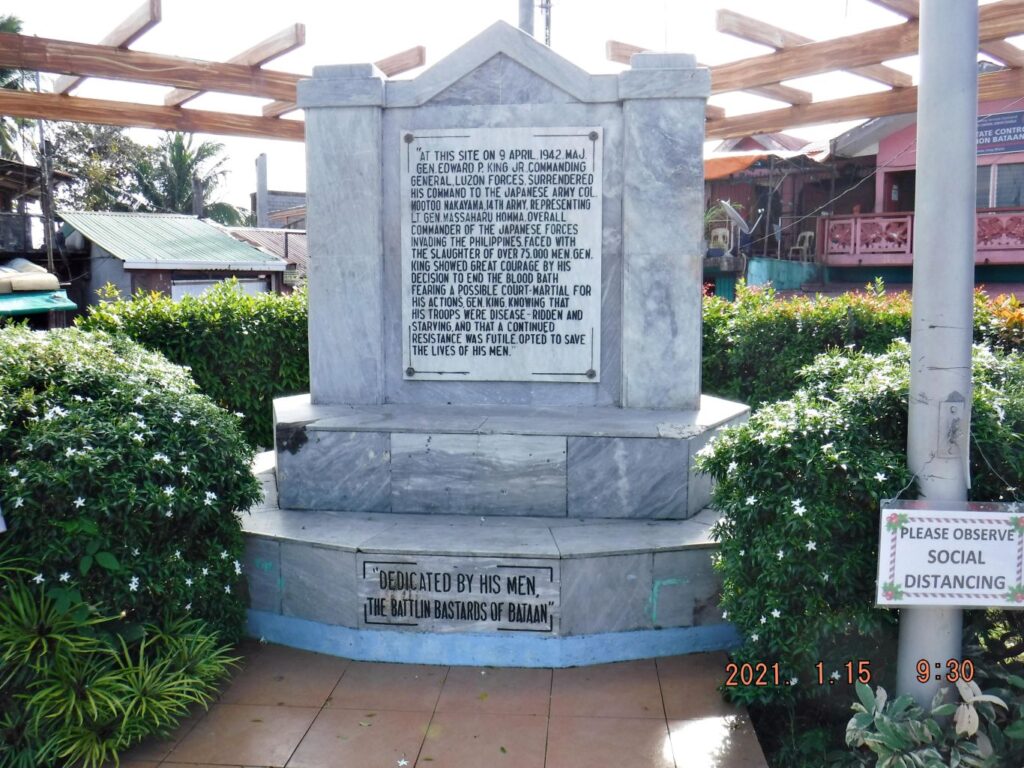 Zf333. This is the Bataan Battle Surrender Memorial in Lamao Bataan, shot on the 15th of Jan. 2021. It was built by the Battlin Bastards of Bataan with the proud consent of the people of Bataan. I believe one local resident, Mrs Edna Binkowski helped turning all the wheels.

Recently in our forum email discussions about the Bataan Surrender some pictures were exchanged and the purpose of this posting is to share them!

The Battlin Bastards of Bataan (BBB) used to have a relative short page about the surrender of Gen. King and his Bataan Forces.  I saved it and recopy it here:

The
(at Lamao, Bataan)

Zf334.-Diwa ng Bataan (Spirit of Bataan) a Symbol, a Tribute, a Pledge Memorial.

This image is dedicated to the controversy as to where Gen. King surrendered because this memorial is also called the Final Surrender Location of Gen. King. However this spot of this memorial is important because Gen King and his surrender party was brought here on the 9th of April 1942 and were further interrogated on related matters. A famous picture was taken here with Gen. King and his Japanese captors sitting around tables. Gen. King and his surrender party were kept here as hostages for a period until all his Philippine and American Forces surrendered to the Imperial Japanese Forces.

Zf335. This photo is from Tony Feredo, in my opinion, he is a walking dictionary about WWII in the Philippines. He said this:

The first meeting of King during his surrender was actually with Major General Kameichiro Nagano, IJA 21st Div Infantry Commander at Lamao. However Nagano was not in a position to discuss formal terms of the surrender so that is why King had to meet with Col Nakayama who was Homma’s representative for the 14th Army. Attached is a photo of King with Nagano (seated).

There were several photos taken by both the Japanese Propaganda corps as well as the IJA own unit photographers that made it to various publications after the fall of the Philippines.  Some of them also appeared on specialized photo books like what the IJA 16th Division during their 41-42 campaign in the Philippines.

Professor Rico Jose sent these 5 images (He is the most knowledgeable historian about WWII in the Philippines) and said this:

Karl, John and everyone in the loop,

I scanned my copy of the Official Journal the other day at 600dpi. I am attaching the result. I think they are clearer and of better resolution than the JACAR scans. I’m also attaching a photo of Gen. King in a jeep with Japanese officers – I believe they were on their way to Balanga. There is another one of  Gen. King in the jeep with Japanese from a slightly different angle. I have a few other photos of Gen. King in the agricultural school area, but haven’t scanned them yet.

Here are two photos of Gen. King at Lamao. The photo with him seated is from Mainichi Shimbun; the caption says he arrived at the headquarters of the 7th Tank Regiment at around 1pm (presumably Japanese time, so this would be noon Philippine time). I think this was taken while waiting for Col. Nakayama to arrive. The second photo is uncaptioned, but is obviously in the same place – either just as Gen. King arrived or as Col. Nakayama arrived. Hope this is of interest to you. Rico.

Zf339. Gen King in Balnaga. This picture caused all the confusion as to where Gen King surrendered. It was published in Japan and copied in all the Allied papers during and after WWII.  The picture description got this also wrong that King was the Commander of Eastern Bataan, no, He was commander of all of Bataan.

Zf340. The surrender of Major General Jones, commander of the First (I) Philippine Corps in discussion to surrender his western sector of Bataan with his staff. He was ordered by Gen. King to surrender. This picture had started the discussion. The researcher in writing the book: Relentless Hope: A True Story of War and Survival, by David L. Britt. Wanted to know whether there were any better copies. He had found it in the Japanese Archives with this URL:

Zf341. One of several images in the above Japanese URL with Japanese Authorities taking care of needs of the Bataan population after all the fighting.

Zf345. Here’s a pretty poignant documentary film screen shot of surrendered Phil. Scouts with Japanese who seem to be gloating in the background. The Scouts’ faces break my heart says Victor Verano. He is an officer of the Philippine Scout Association and he sent me this picture.

Credit of this image goes to the CriticalPast website, it is a screen shot of one of their videos.