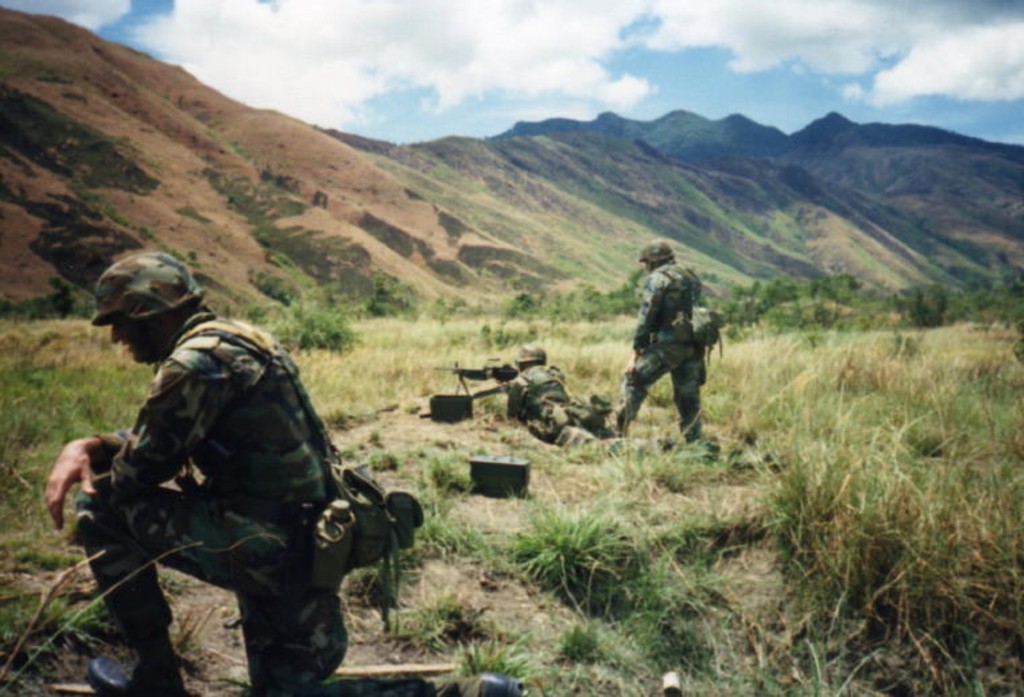 Zf625. The Agusuhin River Valley was an Olongapo Naval Reservation Training Area, called Green Beach by the USMC. Local people lived here in a community called Sitio Agusuhin, part of Barangay Cawag in the Subic Municipality. The Marines and local people had a good relationship. This is an about 1989 US Marine Corps image. One can recognize the 5 peaks of Mt. Cinco Picos.

This is a story of a valley on the Redondo Peninsular that forms the west side of Subic Bay and separates it from the Philippine West Sea (the former South China Sea). It was part of the former Olongapo Naval Reservation established early last century by President Teddy Roosevelt. It is now part of the Subic Bay Freeport Zone (SBFZ). It is in the Agusuhin River Valley; look at the map presented here. Other names that go with this story are: the Quarry at Agusuhin, Olongapo Naval Reservation, Malampayan Gas Field Platform, Hanjin Shipyard, U.S Equity Firm Cerberus, Philippine Navy Homeport. 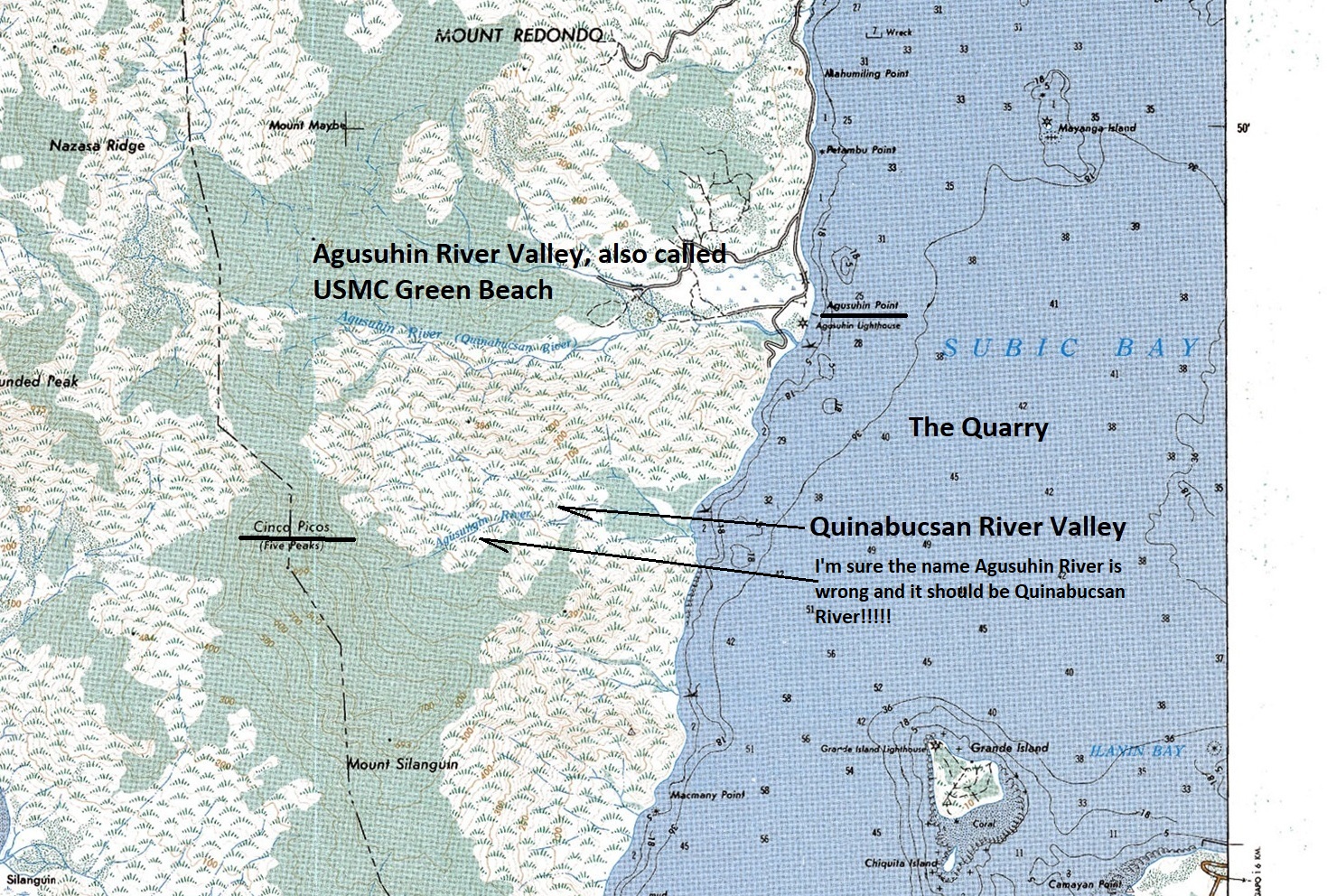 Zf626. This is a cropped section of the San Antonio 1:50000 size map and it shows you most of the geographic places mentioned in this story. 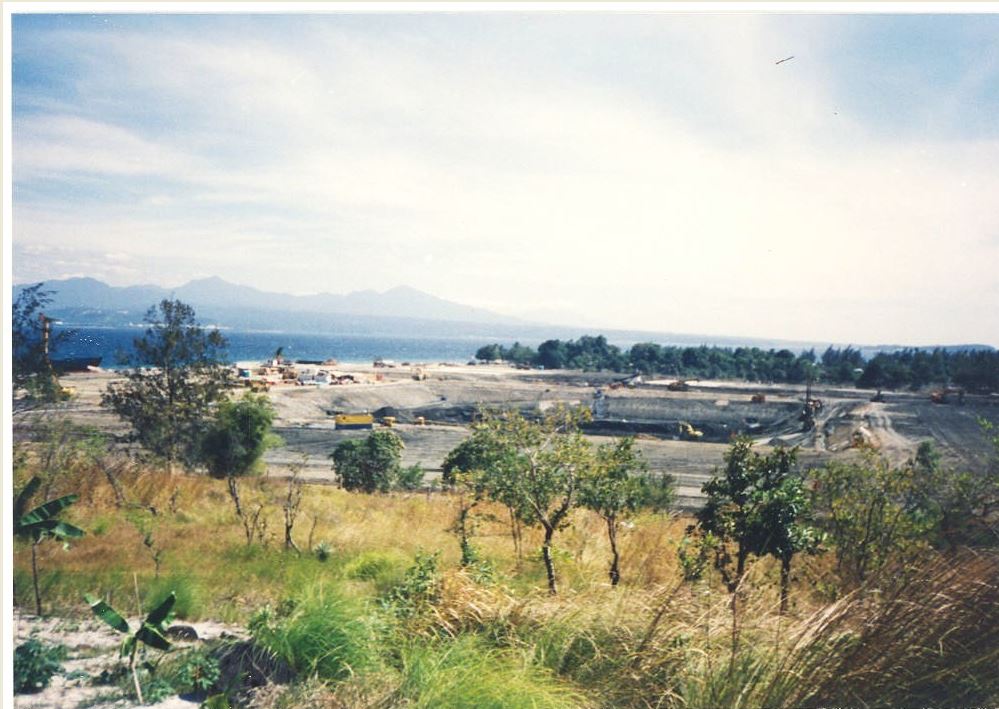 Zf627. This is the start of constructing the Malampayan Gas Field Platform in the Agusuhin River Valley about 1999. They dug a hole in the ground and built the platform there. When finished, a channel will be dug to float the platform out. 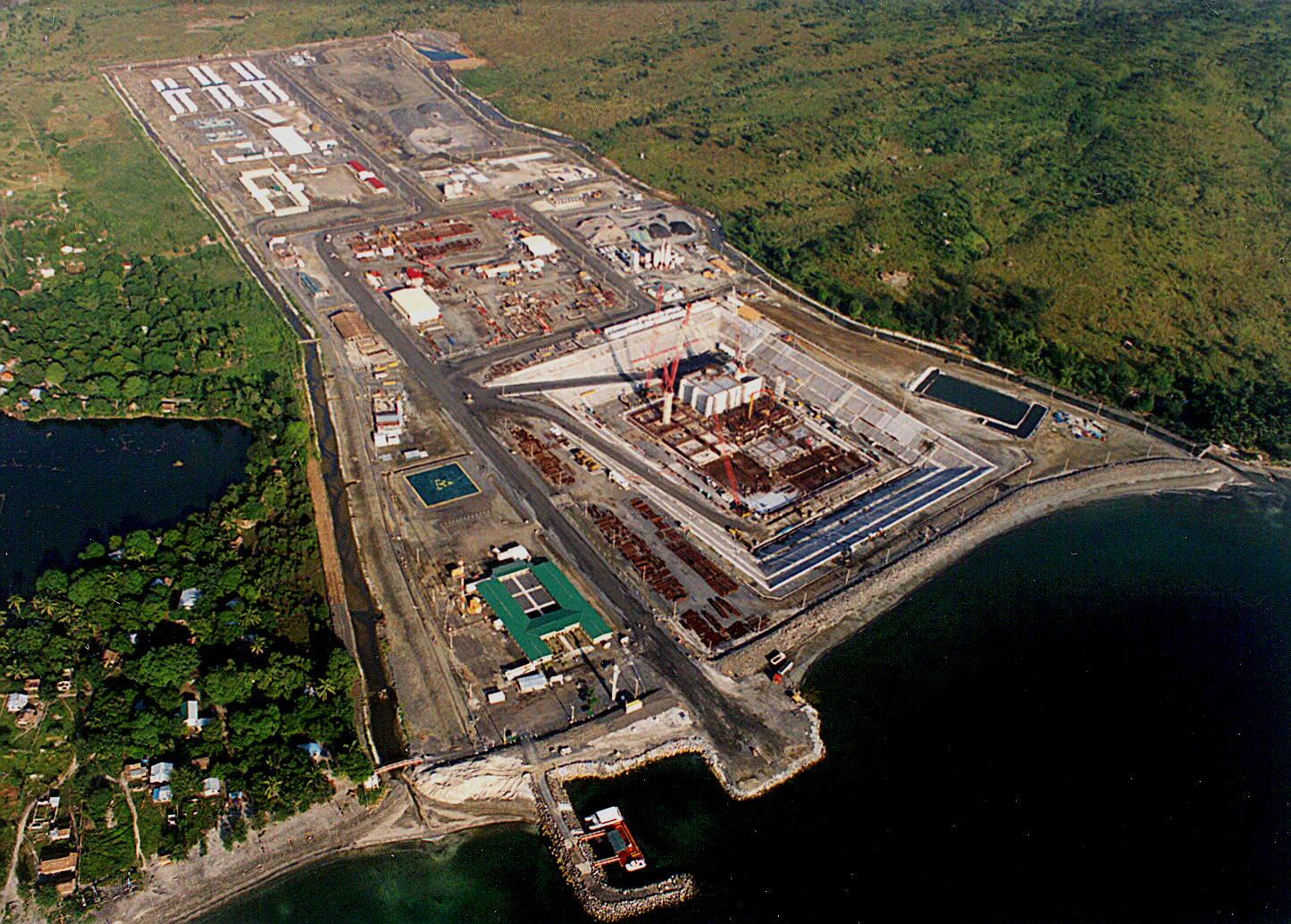 Zf628. The Malampayan Gas Field Platform is being built in the Agusuhin River Valley about 1999. They dug a hole in the ground and built the platform there. When finished, a channel will be dug to float the platform out. This picture was posted by Mark Smith in the Facebook Group: Barrio Barretto and Baloy Beach Rooms, Bars and Restaurants but now I cannot find it. This project used only part of the valley; most of the Agusuhin residents were able to stay, right and left of the site! 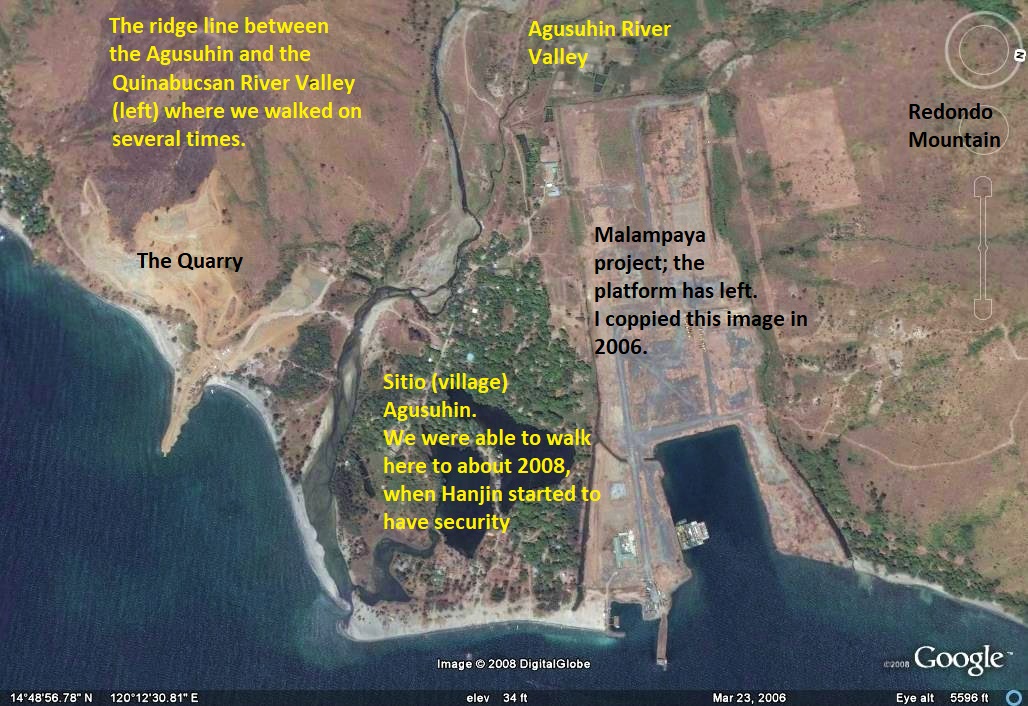 Zf629. This is a Google Earth image of the Agusuhin River Valley in 2006, the Malampayan Platform has left and the people are still able to live there.

The next three pictures are from Karl, the imprinted date of 2003 is wrong; my camera had problems and would not let me change it. 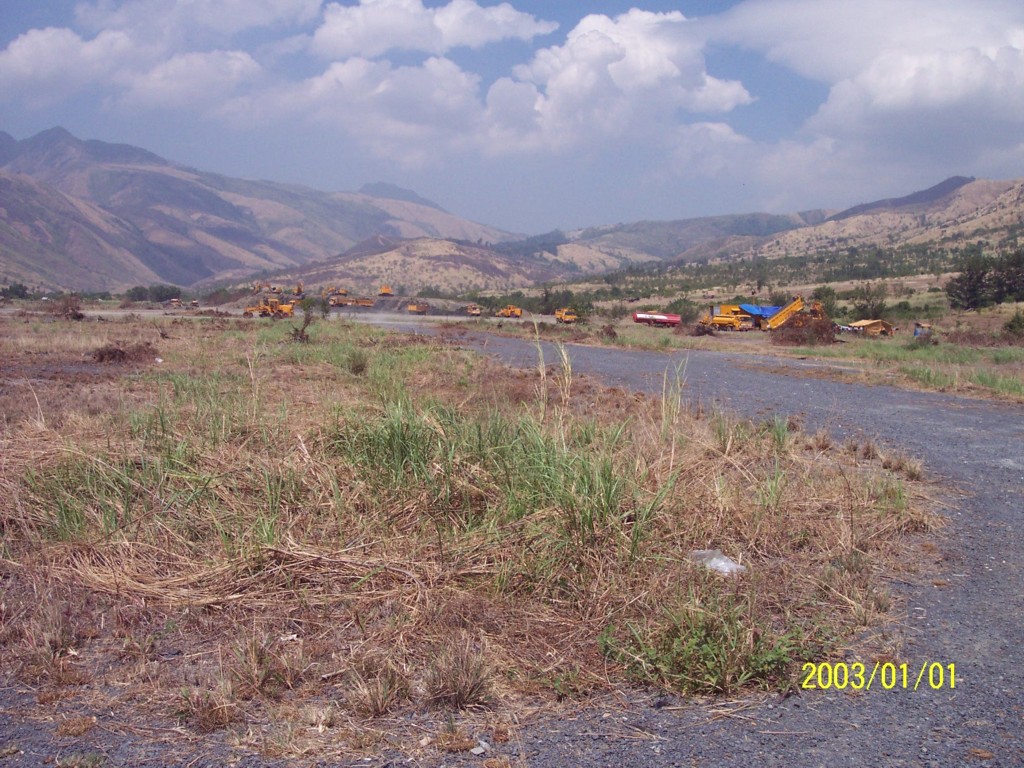 Zf630. This is an April 2006 image of the Agusuhin River Valley, looking up-river or up-valley. One can clearly see, it is fed by two rivers, from left and right, divided by a ridgeline splitting this valley. We see earth moving equipment preparing the site for the Hanjin Shipyard. 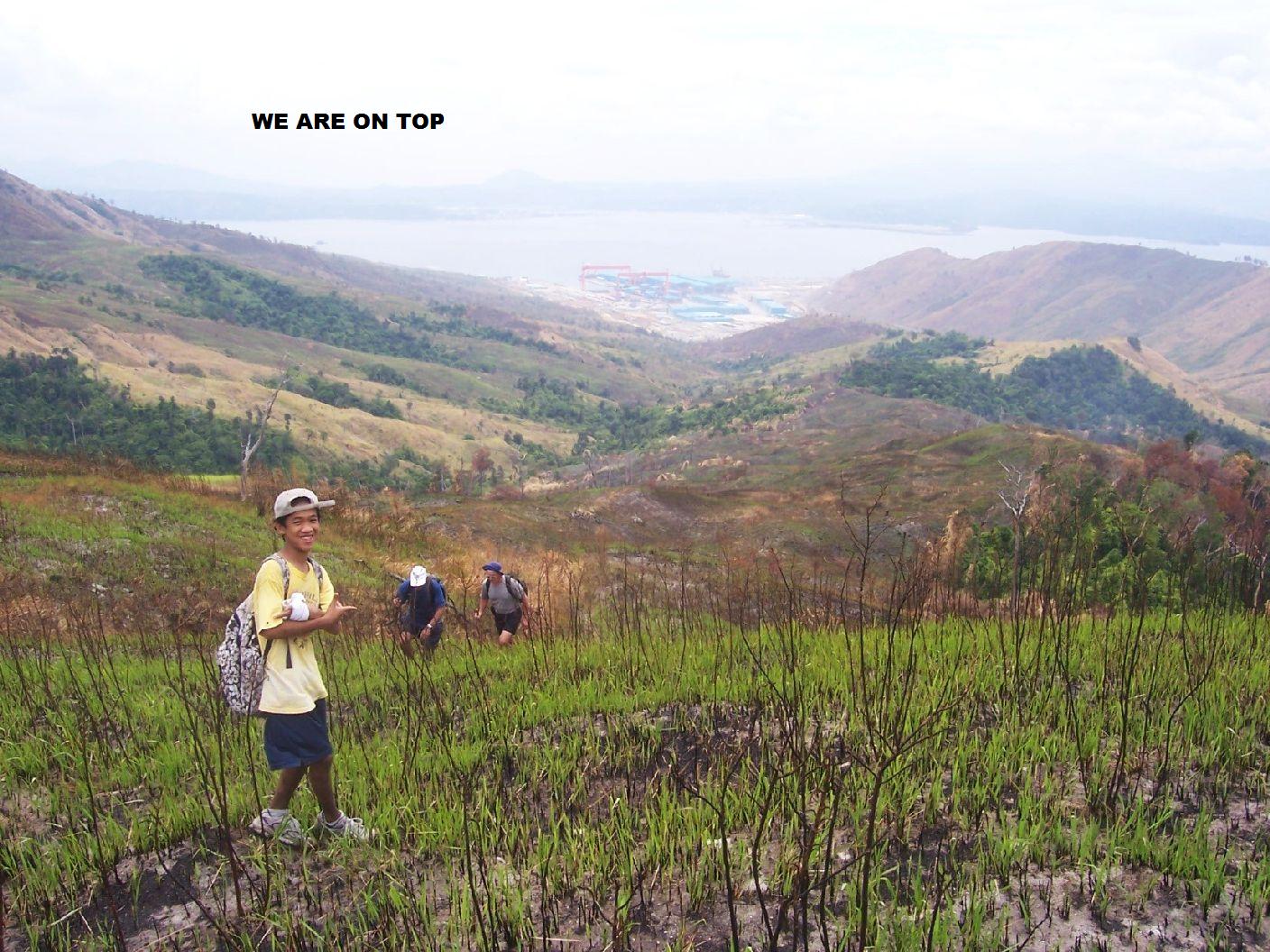 Zf631. This is an April 2008 image, the ridgeline splitting the Agusuhin Valley was burned and friends and I took advantage of that and made a hike all the way up to the watershed boundary. We can see that Hanjin made a lot of progress in 2 years and the west north dry-dock is finished. The wall of the shipyard was not built yet and we were able to drive up into the valley to our starting point and drove along the area where Hanjin was building the wall. 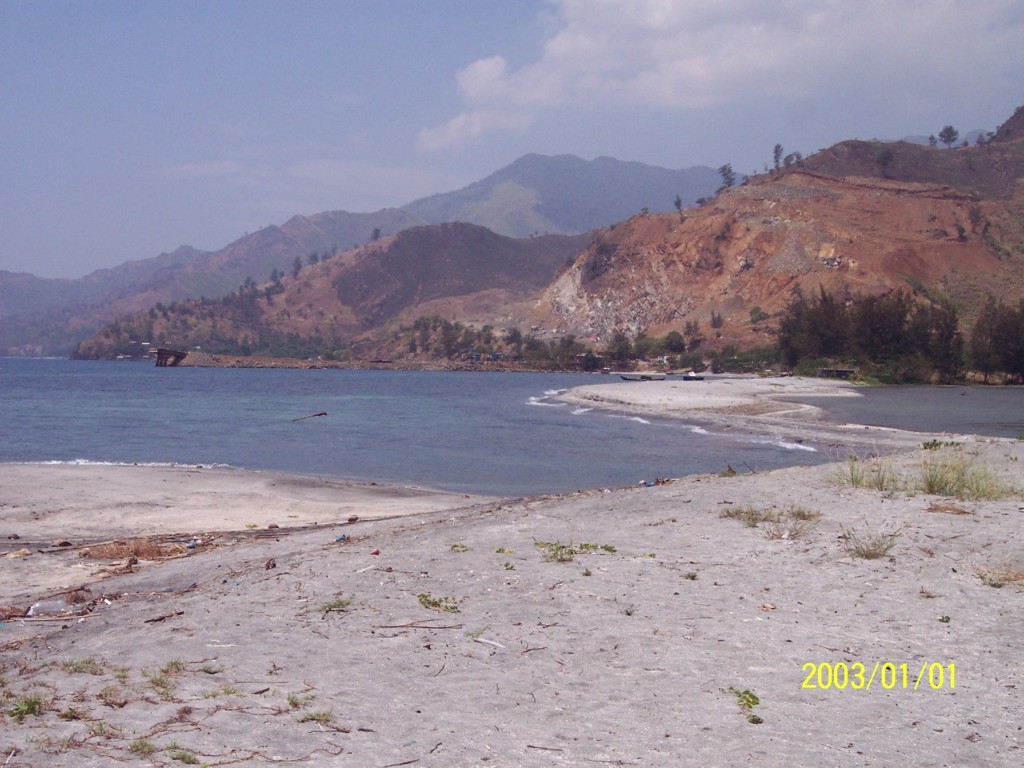 Zf632. This is an April 2006 images and I’m sad that this view is not possible anymore. It was nice beaches, beautiful lagoons, nice shady trees and friendly people. This is the quarry at Agusuhin Point. It is the ridgeline that divides the Agusuhin and Quinabucsan River Valleys. The Hanjin shipyard extended far into that direction and all the beauty is gone forever. That quarry was used by the Navy, then the Subic Bay Metropolitan Authority (SBMA), Hanjin used it a lot also.

The next 4 pictures are from Jos, my best hiking partner, she was the spouse of Belgium Factory Manger here in Subic Bay. They were all shot in 2002. 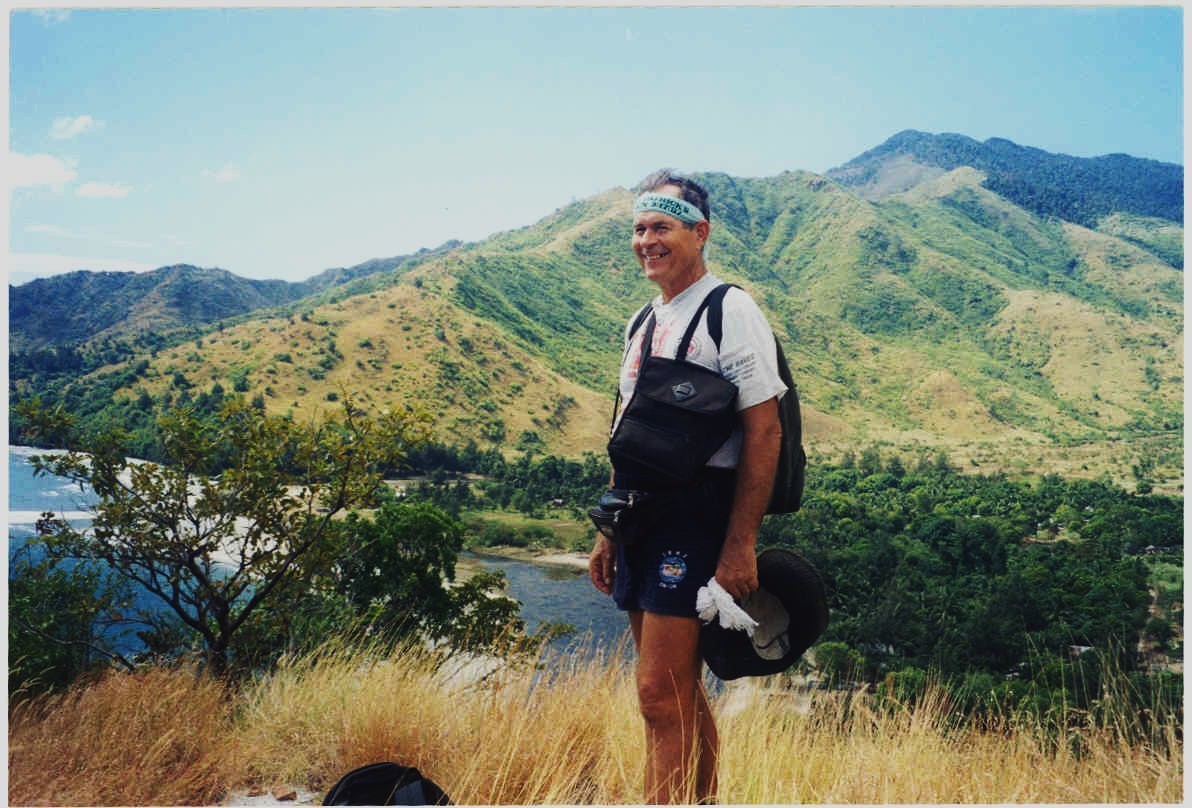 Zf633. Hey, I like this picture, I don’t look too bad. We are on the ridge dividing both valleys mentioned before. In this picture we are looking down into the Quinabucsan Valley and see the lovely beaches, lagoon and woods. Thankful, they are still there today. 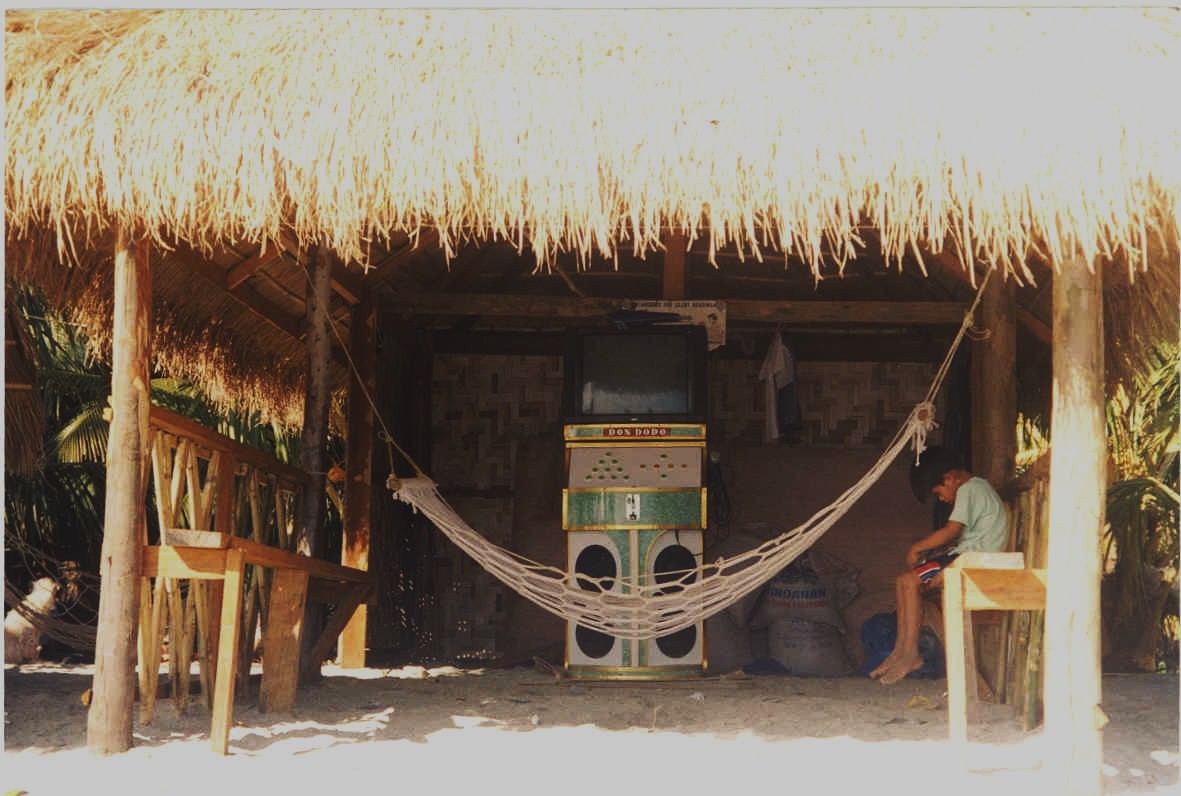 Zf634. Sitio Agusuhin was nice lovely Philippine community, just a little better because of the nice beach, lagoon and valley surroundings, but it is all gone now.

Zf635. Sitio Agusuhin was a substantial sitio, look at the houses and children. But this picture is special for two more reasons; my friend Jim is a retired Marine back in his old training grounds. Believe it or not that bucket is special! That product is from the large Belgium Consortium, Jos Husband is working for. So she had a good reason to get the bucket into this picture. 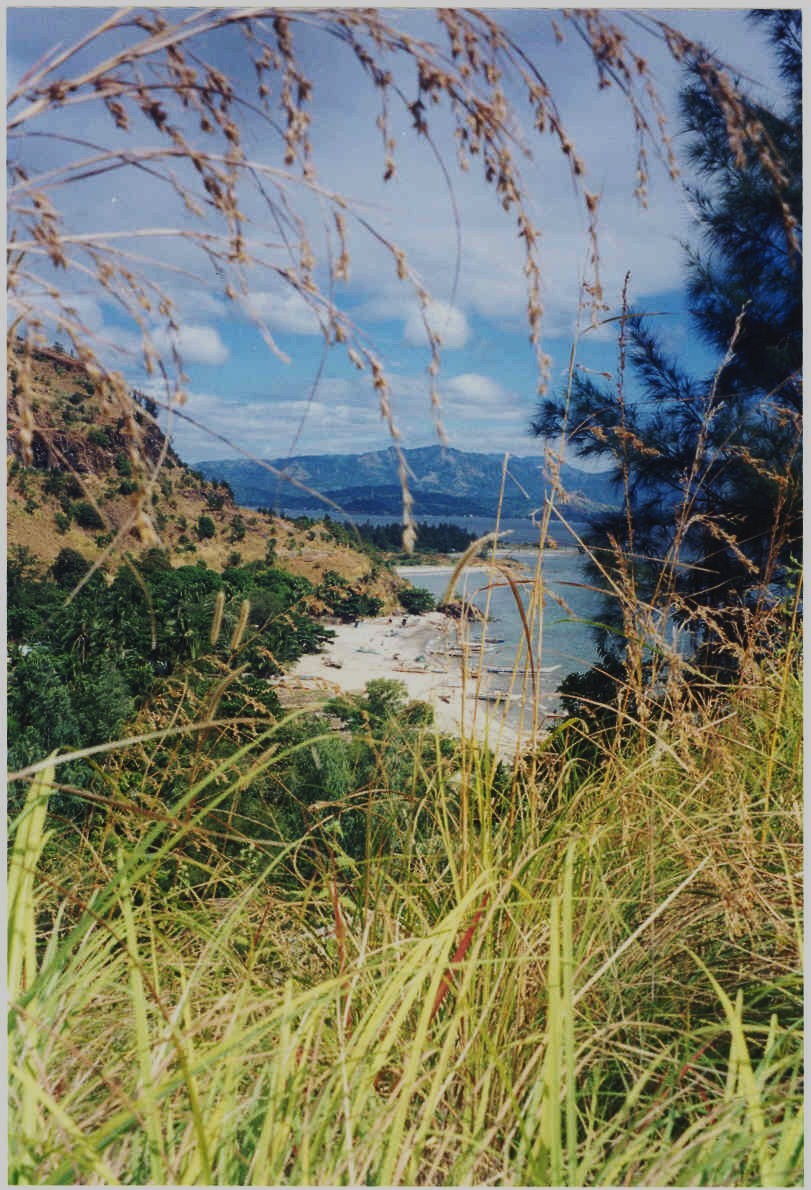 Zf636. Sad, but this is no more, we are looking from the Quinabucsan Valley towards the Agusuhin Valley, passed this small beach with many boats between. It is no more; all of this has become the Hanjin Shipyard. 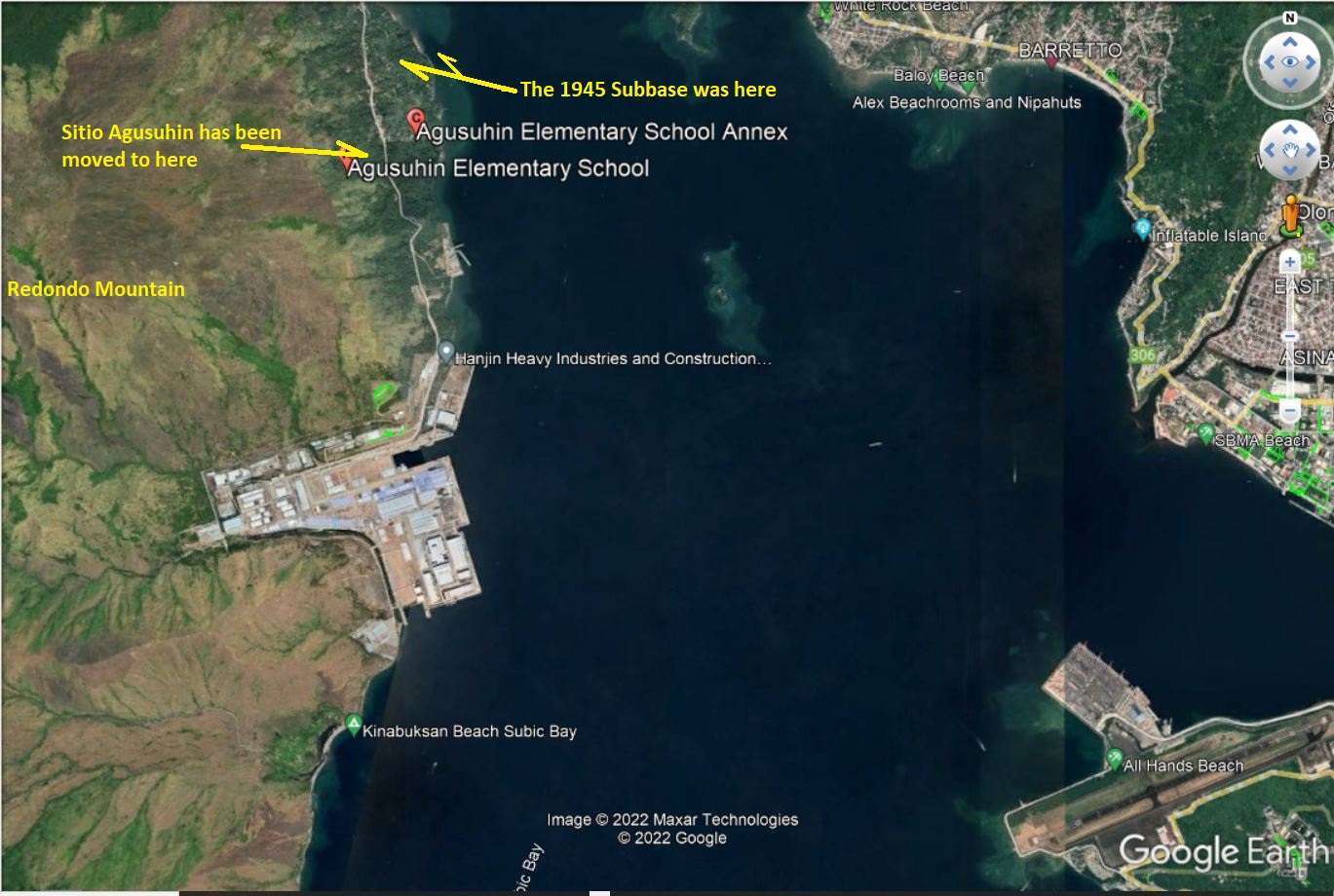 Zf637. Sitio Agusuhin has been moved to here. 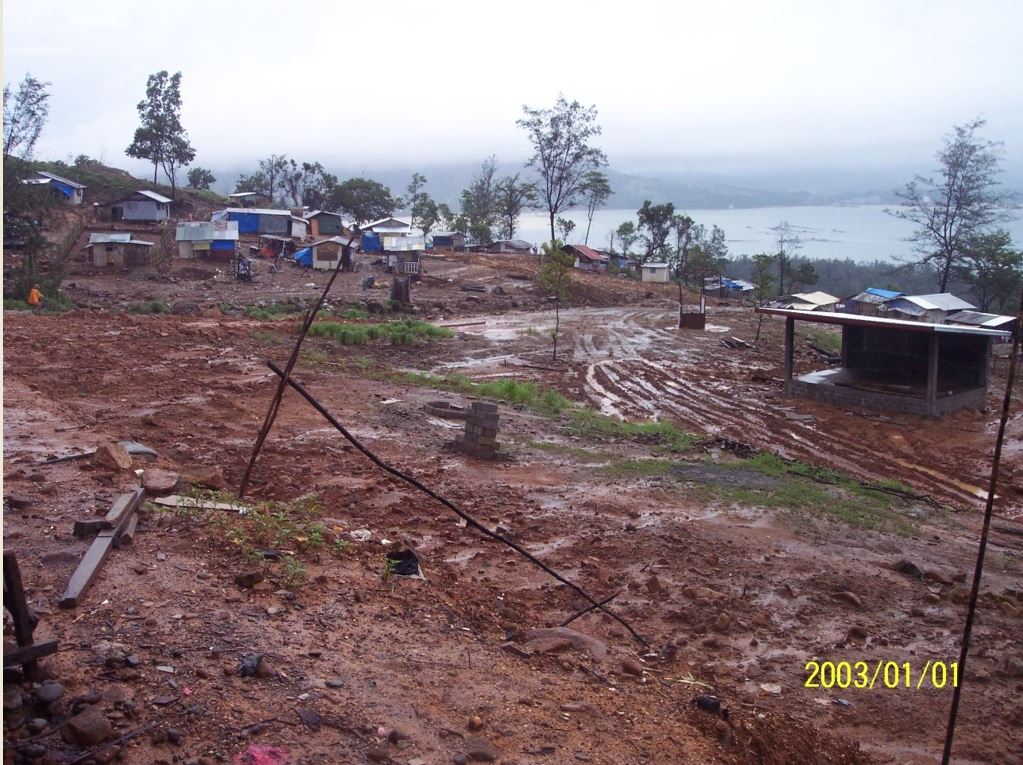 Zf638. This is an Aug. 2006 image, Sitio Agusuhin is being moved. It was the rainy season; it did not look very good. Even today, Agusuhin can never be compared with the place it was. 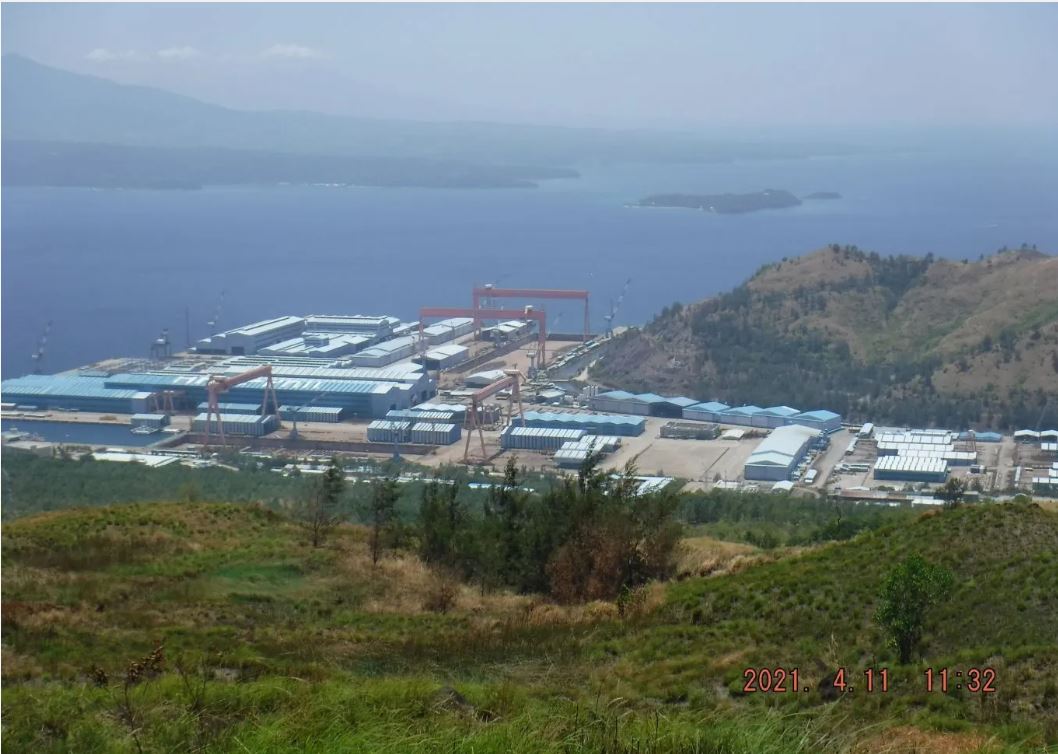 The Manila Bulletin reported this, that the Department of National Defense (DND) Secretary Delfin Lorenzana announced Wednesday, March 9, that there will be no impact on the country’s national security if the reported takeover of an abandoned shipyard in Subic Bay, Zambales by a United States private equity firm will push through.

He also said that the PN will occupy and lease the northern portion of the shipyard to be the home port of its frigates and other big ships.