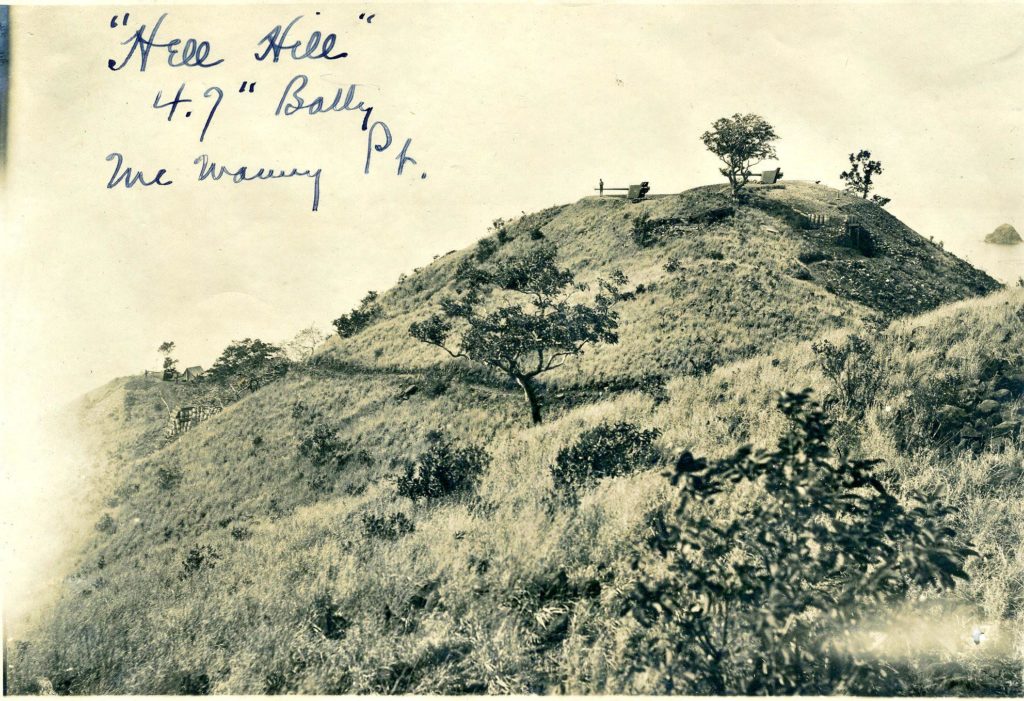 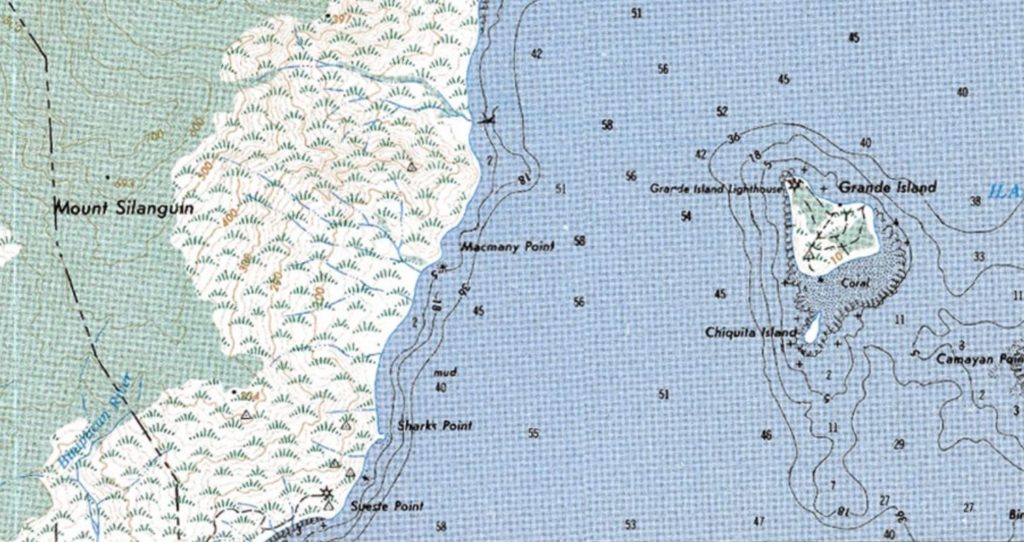 Ze736. This is a section of the San Antonio, Zambales, Luzon Island 1:50000 map and it shows a Macmany Point. It is located on the Redondo Peninsular which forms the west side of Subic Bay in the Philippines. It is across the channel from Grande Island. 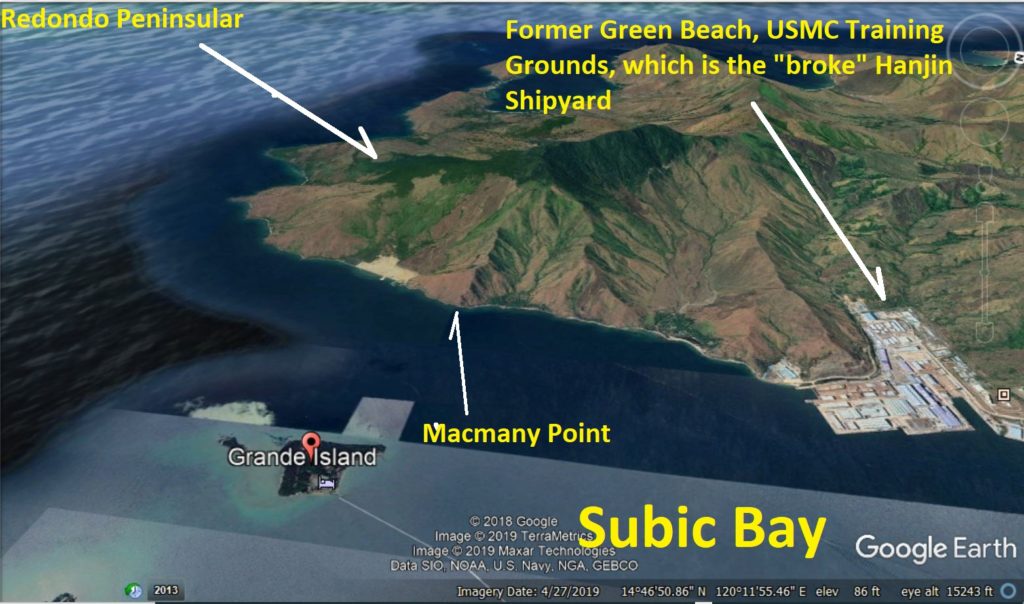 Ze737. This is a captured image of Google Earth showing the general Area of Macmany Point. Grande Island helps us to better understand where this point is.

Let’s call this battery the “Hell Hill Battery” for this story. It had 4.7 Inch guns. The guns came from the USS Albany, an old cruiser that had been decommissioned and broken up. 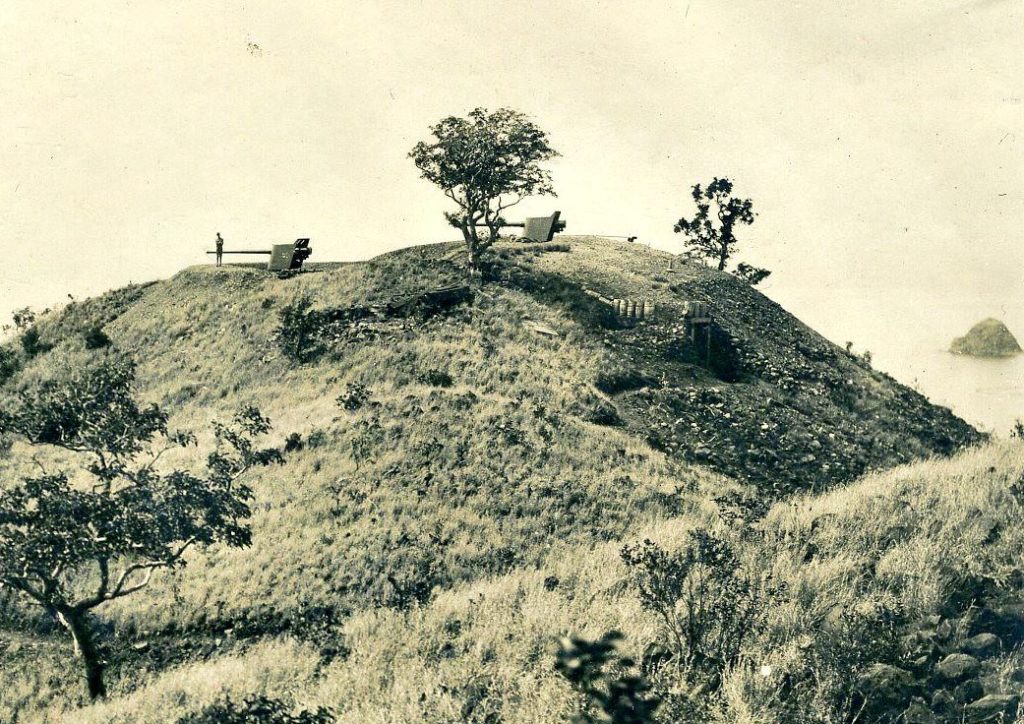 Ze738. The “Hell Hill” picture zoomed in! The rock at right must be Shark’s Point; look at the map. Notice that at least one underground magazine or bunker existed there. 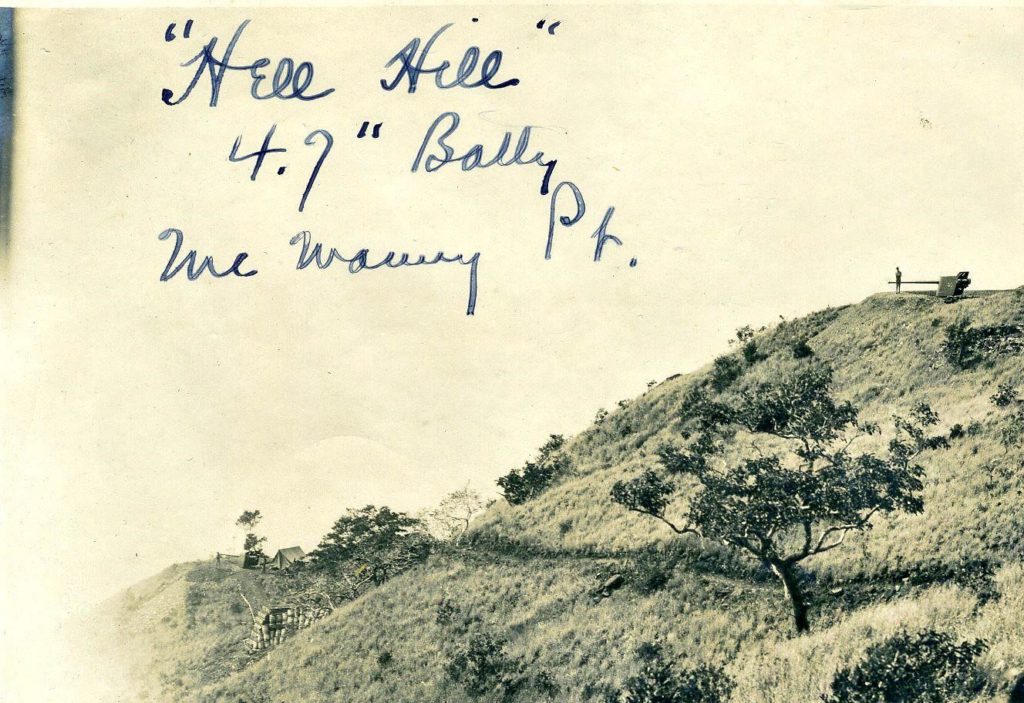 Ze739. There were more than 2 guns on “Hell Hill” in Subic Bay. Zoomed in we can see at least one other gun. Notice the tent and it seems wooden barrels are used to fortify a position, perhaps a magazine or bunker. 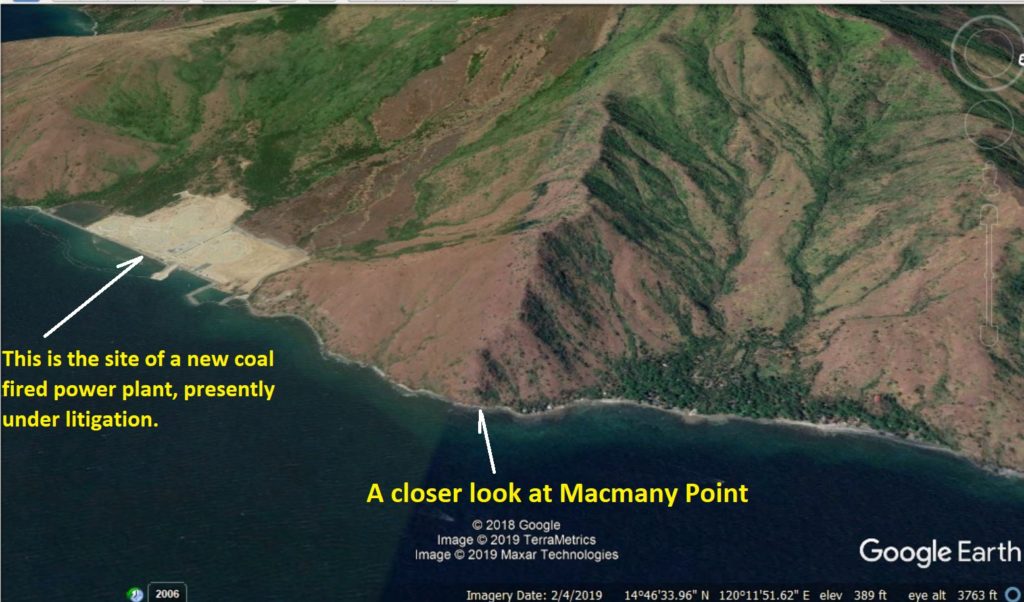 Ze740. This is a closer look at Macmany Point in Subic Bay. It shows the site of a new coal fired power plant, which is presently under litigation. 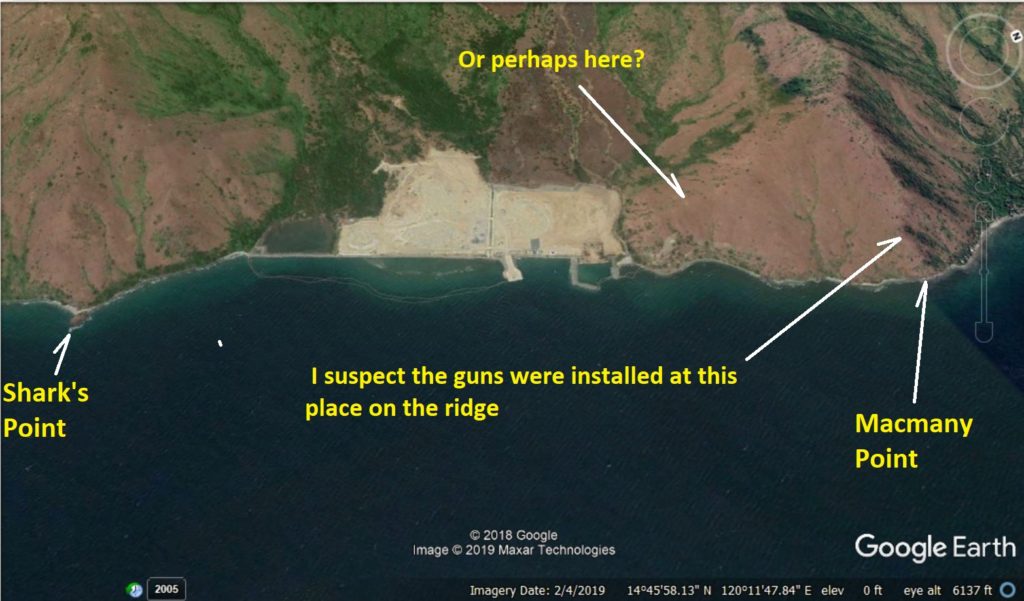 Ze741. This is a Google Earth Image of Macmany Point in Subic Bay and marked the possible location of Battery “Hell Hill” in Subic Bay. I suspect the guns were installed at a place on the ridge or perhaps nearby there.

Where did the story come from? 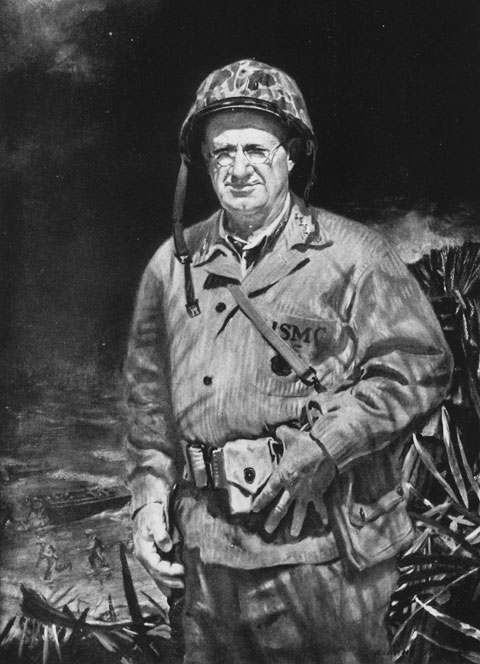 Ze742. GENERAL HOLLAND M. SMITH, U.S.M.C. From a painting by Commander Albert K. Murray, U.S.N.R. and this URL: Autobiography of General Holland “Howling Mad” Smith.Click here for the URL or copy and paste it:

Even GENERAL HOLLAND M. SMITH, U.S.M.C got in the shits as a young officer. As a young officer he got in trouble with his Commanding Officer in Cavite and got condemned to the battery on Hell’s Hill. Here, at McManny Point, he had his first experience of violent death in service.

His story on Hell’s Hill is in chapter two of the above URL on page 36:

But I copied and pasted the applicable paragraphs here for your convenience:

A welcome break in my life at Olongapo came when I left for Cavite Naval Base, in Manila Bay, to manage the Marine baseball team playing in the Manila League. The team did fairly well but after the season I got into trouble with the Commanding Officer at the Marine Barracks. For the first and only time in my career I received an unfavorable fitness report and for my sins I was transferred to McManny Point, on the east coast of Subic Bay off Grande Island. The report was quite justified although something was to be said in extenuation. I had too many jobs. I commanded a special duty detachment and also served as Post Quartermaster, Post Exchange Officer, Post Mess Officer and manager of the baseball team. It was too much for a young officer of my brief experience.

At McManny Point I had my first experience of violent death in service. We were emplacing guns for the defense of Subic Bay against possible Japanese action. The Treaty of Portsmouth ending the Russo-Japanese War only two years earlier left the Japanese indignant against the Americans who, they claimed, had robbed them of the fruits of victory. They were cocky after defeating Russia and thought they could take on the United States, or anybody. This must have happened in 1907.

The guns were not large, 4.7 inches. They had been removed from the USS Albany, an old cruiser that had been decommissioned and broken up. Marine gun crews were assigned to test the armament but when we fired the first gun it exploded, killing one man and seriously wounding several others.

Even at that time, Japanese intelligence was following our defense program. On a weekend hike around McManny Point, I discovered a series of wooden pegs leading from Lingayen Gulf, on the northwest coast of Luzon, to our batteries at McManny Point. The pegs were definitely identified as Japanese markers but we took no notice of them.

–36–
However, it wasn’t the Japanese threat that took me away from McManny Point, it was malaria carried by the clouds of mosquitoes over this marshy spot. With 85 percent of my command, I contracted the disease and was invalided home in September, 1908.

Another point of interest about his nickname “Howlin’ Mad”, he writes about it, on page 23; it is copied here:

I suppose I did use tempestuous language to keep the men moving because I was determined to break the record. Somewhere along the line, or perhaps in the telling of the story afterwards, the name “Howlin’ Mad” was coined. Despite the reputation it has given me, I protest that I am not given to sudden, uncontrollable outbursts of temper or to bawling out without cause. I would rather reason with a man than try to browbeat him. However, I do speak frankly, freely and emphatically when injustices occur, when official stupidity obstructs plans, or when the brass, big or small, tries to take liberties with my Marines. My vehemence has been magnified into habitual irreverence, which is incorrect. 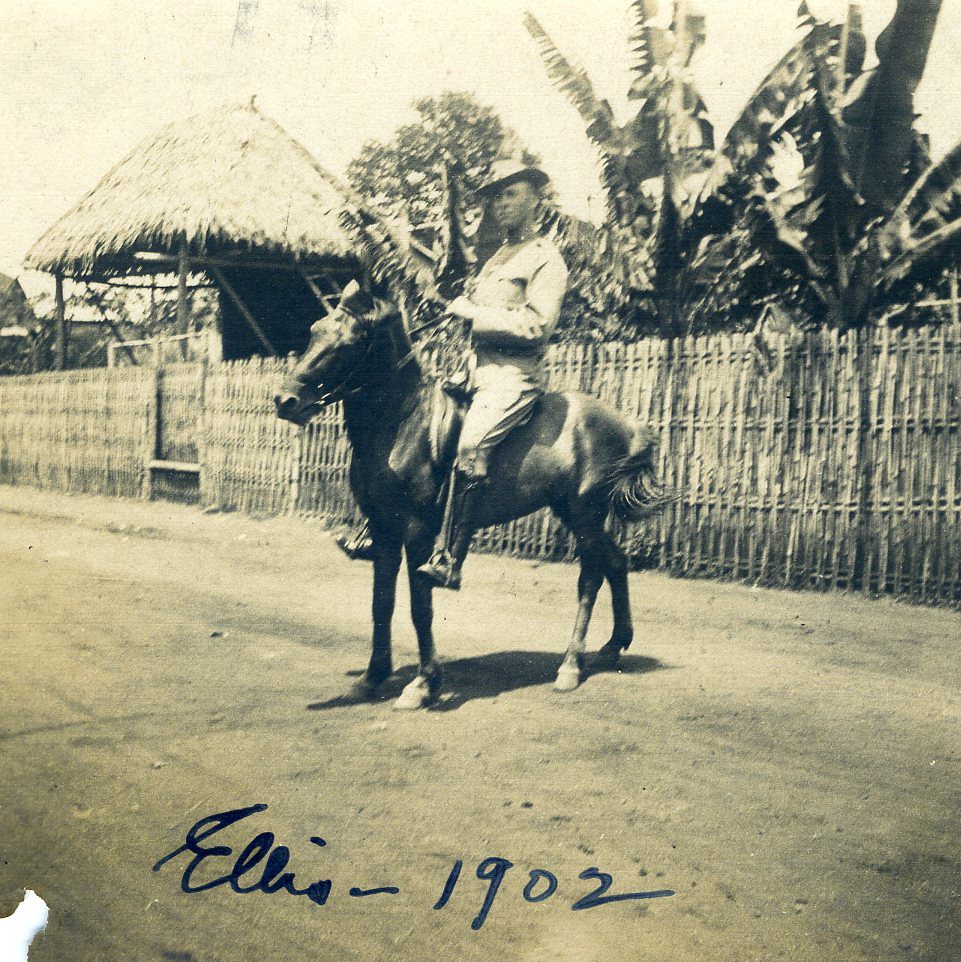 Ze743. USMC Officer and former Enlisted Man Earl Hancock “Pete” Ellis on horseback in 1902. He believed in taking pictures and they eventually ended up in the USMS Archives. Thank you , Sir, and your descendants. 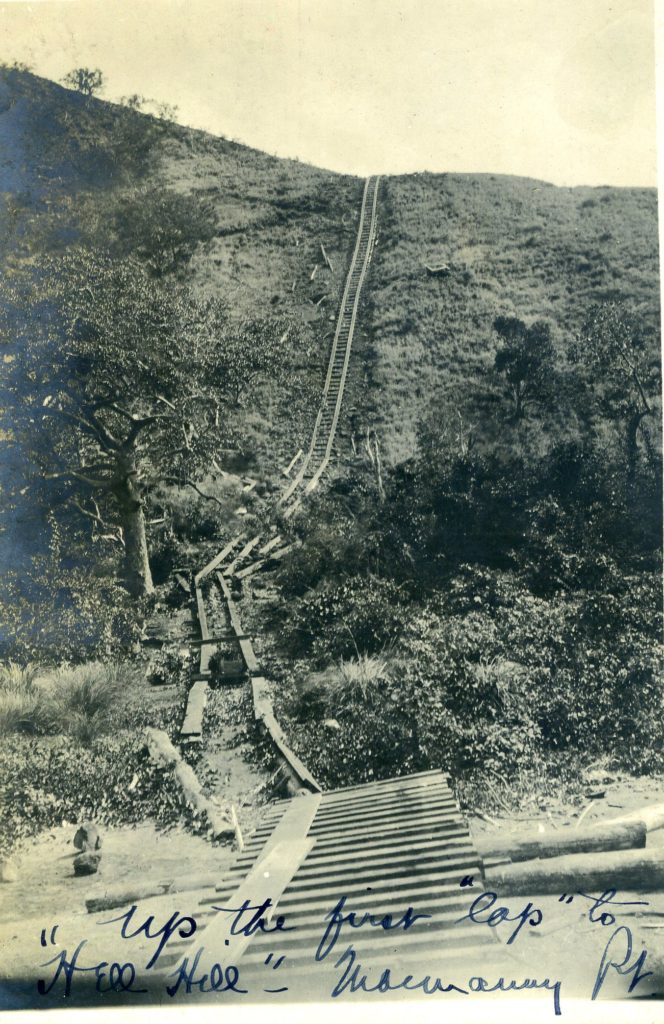 Ze777. Wow! The Marines certainly are Can Do, they got those guns up there the hard way. This is the USMC 4.7 Inch Battery on top of Hell Hill at Macmany Point, across the channel from Grande Island in Subic Bay 1909. This picture came from the Earl Hancock “Pete” Ellis Picture Collection in the U.S.M.C. Archives. 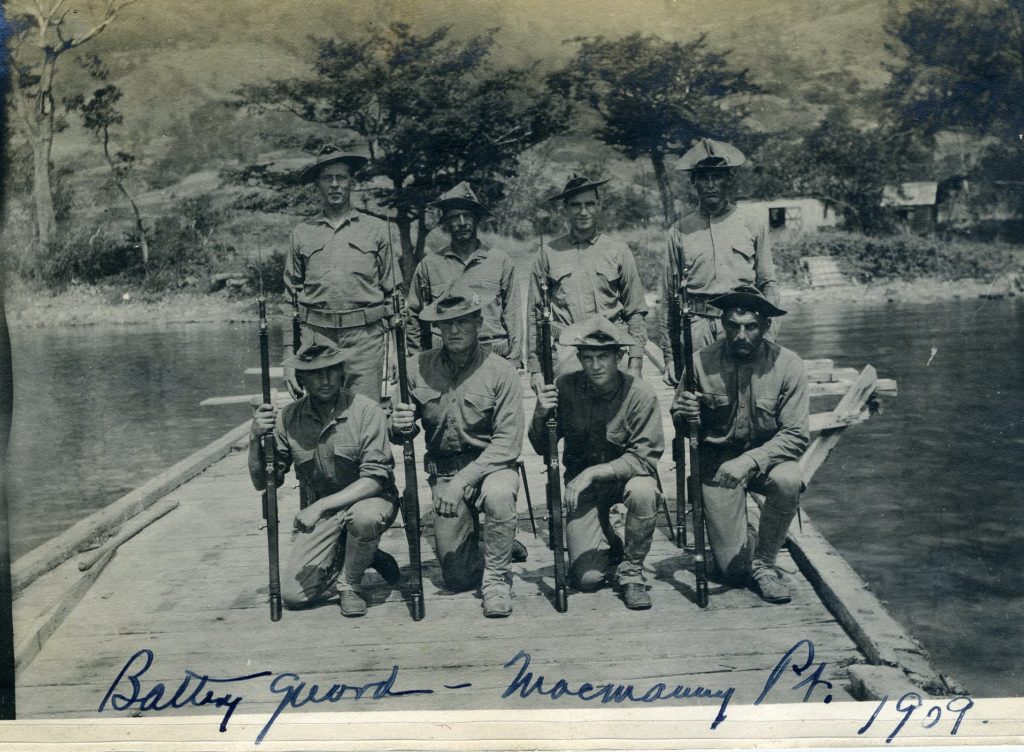 Ze778. The Marine Guard, U.S.M.C., for the USMC 4.7 Inch Battery on top of Hell Hill at Macmany Point, across the channel from Grande Island in Subic Bay 1909. It looks like a pier was built to the valley next to Hell Hill and they probable built a small camp there. This picture came from the Earl Hancock “Pete” Ellis Picture Collection in the U.S.M.C. Archives. 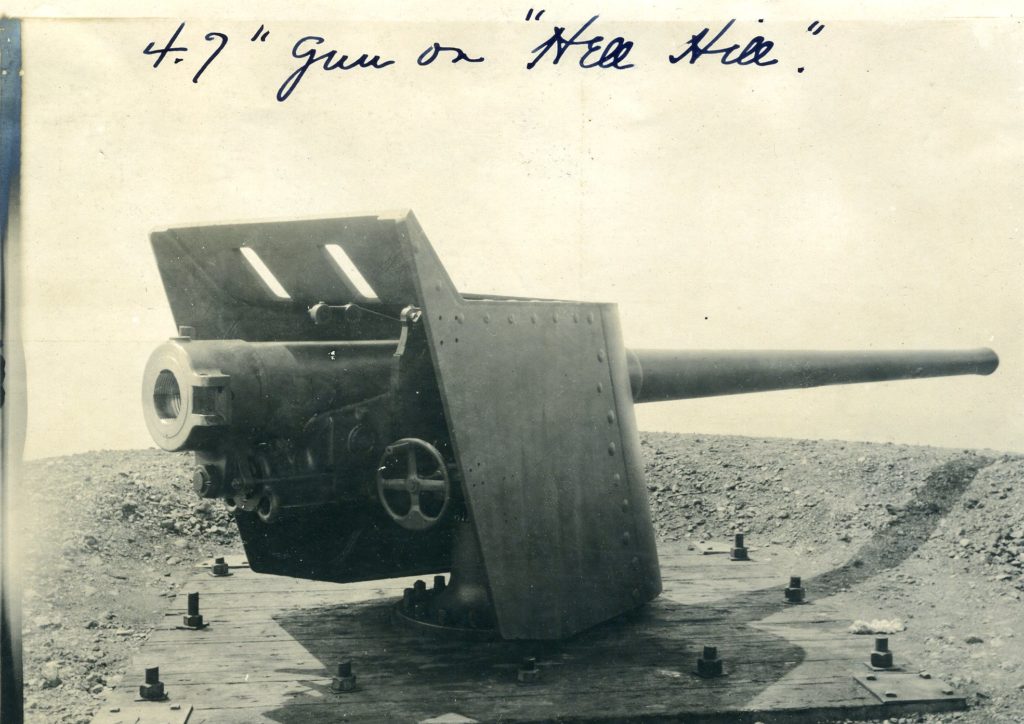 Ze779. This is a close-up image of one of the USMC 4.7 Inch Battery Guns on top of Hell Hill at Macmany Point, across the channel from Grande Island in Subic Bay 1909. This picture came from the Earl Hancock “Pete” Ellis Picture Collection in the U.S.M.C. Archives. 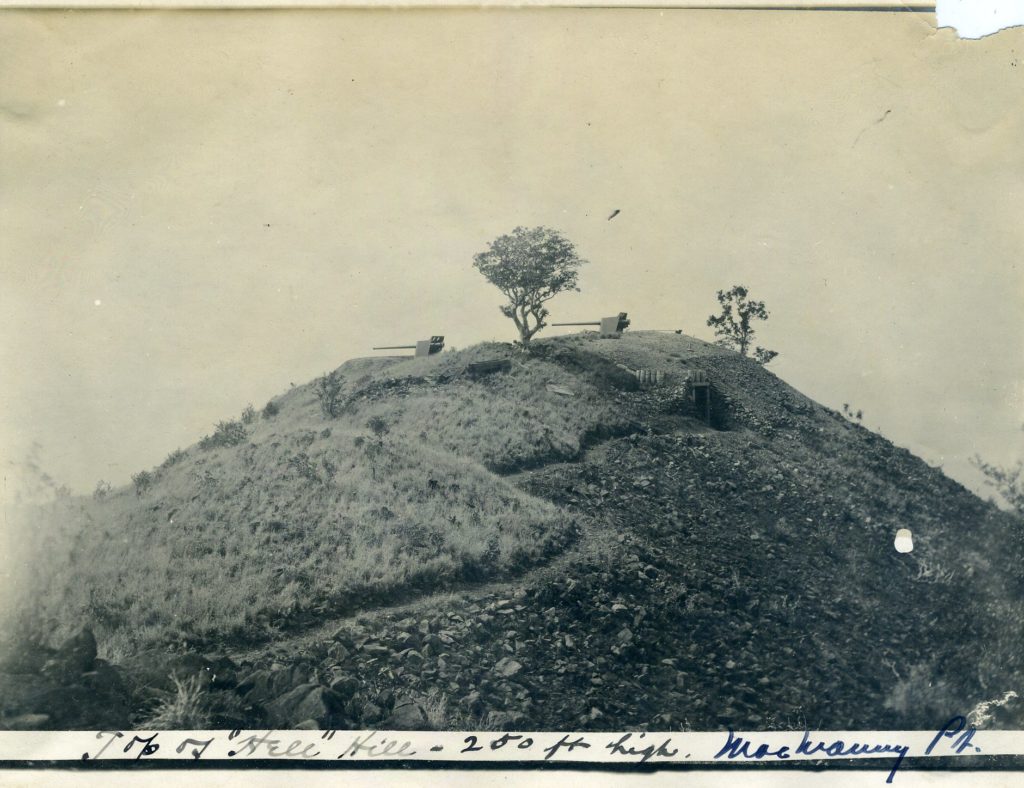 Ze780. Another images of the USMC 4.7 Inch Battery on top of Hell Hill at Macmany Point, across the channel from Grande Island in Subic Bay 1909. This picture came from the Earl Hancock “Pete” Ellis Picture Collection in the U.S.M.C. Archives.