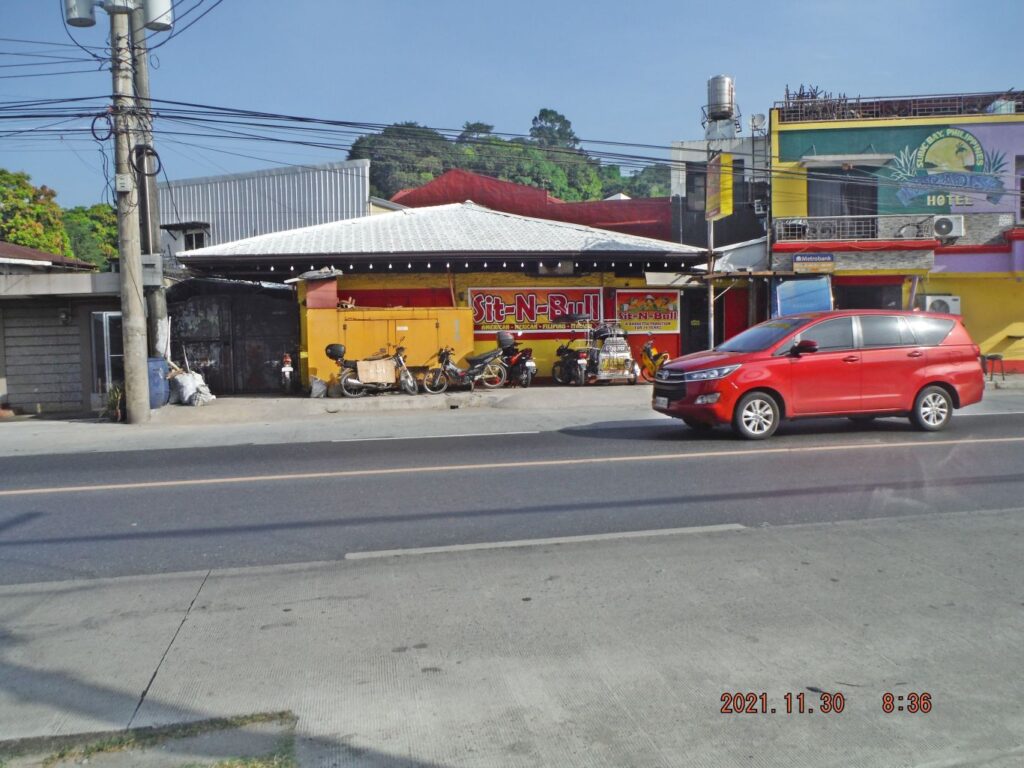 Zf481. 004 This is one random shot of the Subic Bay area in the Oct.-Dec. 2021 time frame. This is an important item; the Sit n Bull Restaurant in Barangay Barretto moved, it is now along the National Highway, next to the entrance of Dell Pilar Street and in the same complex where the Dryden Restaurant used to be. It is very popular Restaurant.

These pictures are uploaded in high resolution into three (3) Flickr albums because they are over 100 pictures. They just show that we live in a warm region of the world where everything stays green and the sea stays blue. These pictures show that live goes-on in the Subic Bay area, even though the US Military has left. We did not leave completely, sometime I see a US Naval ship in the bay, we have an US sponsored Retiree Affairs Office (RAO) in the area, which also maintains close contact to the US Embassy. The RAO is located in Barrio Barretto and used to be a Naval Rifle range, training area for Marines and Army before the war. In 1945 it became a Naval Supply Depot until it was returned to the Philippines and became this, now an international vacation spot. Many veterans and I live here because we like it here and have great memories. Last but not least, we are a US Veterans Community here and enjoy our retirement here in this warm climate with almost 100% friendly people all around.

The 1st album with 35 images uploaded into this 1st of 3 albums about my Oct. to Dec. 2021 random images in high resolution; this is the URL, click here:

Six (6) sample images are shared here in this presentation and in low resolution:

Zf482. 013 This is one random shot of the Subic Bay area in the Oct.-Dec. 2021 time frame. This is a group of young Filipinos enjoying life on the Baloy Long Beach, Barrio Barretto in Olongapo City on the shores of Subic Bay. They were happy to let me take their picture, as usual, most Filipinos like their picture taken and they are very friendly.

Zf483. 015 This is one random shot of the Subic Bay area in the Oct.-Dec. 2021 time frame. This is one of 4 images, as I walked along the Barretto Beach, passed that Rocky Point, to this point, beachside of a popular Pup, “Harleys” run by a Brit. and rewarded myself with a beer and took these 4 pictures from this area.

Zf484. 017 This is one random shot of the Subic Bay area in the Oct.-Dec. 2021 time frame. This is one of 4 images, as I walked along the Barretto Beach, passed that Rocky Point, to this point, beachside of a popular Pup, “Harleys” run by a Brit. and rewarded myself with a beer and took these 4 pictures from this area.

Zf485. 023 to 026. This is one of 4 images of a new road going to Kalaklan Ridge from Gordon Heights with the public electric gang; they are replacing the electric wires on Kalaklan Ridge, I was very surprised to see this regular Ford Pick-up coming up the ridge on this unexpected route.

Zf486. 029 to 035. This is one of 6 images of the former US Naval Base Subic Bay which is now the Subic Bay Freeport Zone (SBFZ). They were shot from the 7th Floor of the new SM (ShoeMart) Mall across the drainage river from the SBFZ. The first picture is of the main gate bridge, there seems to be a problem replacing this bridge, this project been stalled for a couple of years. The other 5 images are shot from left to right; much has changed since the Navy left in 1992.

The 2nd album with 32 images uploaded into this 2nd of 3 albums about my Oct. to Dec. 2021 random images in high resolution; this is the URL, click here:

Five (5) sample images are shared here in this presentation and in low resolution:

Zf487. Image 053 & 054 show a brand new bridge over the Matain River with no roads leading to it or departing from it. So, I jokingly said to myself, ah, the bridge to nowhere. This bridge is located about 5 km inland from the Zambales National Highway, up the Matain River, just passed the barangay (village) Naugsol. This valley is the next valley, NW, from Barrio Barretto. I asked people, where to and they said:  it is for a new road to Bataan, in other words, an Olongapo bypass road. Well in Jan. 2022 I discovered that the authorities are finishing, concreting to road leading to it from the NW. But I’m afraid it will take many years before this road will be finished, they have to across many steep ridgelines or build tunnels thru them. Meanwhile the local people enjoy a bath in the shade from the bridge.

Zf488. Image 057 & 058 are of the only public beach in barangay Barretto called Driftwood Beach. It was closed most of this year 2021. During this Oct.-Dec. time frame it opened, so you see cars of visitors to the beach. The other picture shows part of the beach, Subic Bay, Grande Island and a Naval Logistic Ship (MSC), anchored in the bay. If you know how to get to the beach you can sit anywhere but in the sun. Private property, wall to wall, between the Zambales Highway and the Subic Bay Beach are blocking easy access to the beach.

Zf489. Images 060, 064 & 065 show the Barretto Beach, the mouth of the Matain River at Baloy Long Beach, which is part of Barretto and the new and first high rise of Barretto, the Central Park Hotel. Notice the parking area in front, and I know in the basement and the alley at one side are filled with customer cars. Picture 064 also shows Mount Redondo and the now unused conveyor pilings and mooring pilings of the former Dizon Mine copper and gold ore transfer port. In picture 065, a fellow is just retrieving his cap, he lost.

Zf490. 067. This picture is again a symbol of what is happening to many areas in Subic Bay and the Philippines. This is the entrance to barangay (barrio or village) Barretto, left is a new gas station, just opened. We see the bridge over Maquinaya River, this area, before WWII, now Barrio Barretto, was a US Naval Rifle Range, a Marine and Army training area including with light artillery and was called Maquinaya. In 1945 it became the US Naval Supply depot until this area was returned to the Philippine authorities. The bridge has been very much widened. Across the bridge we see the former Our Lady of Lourdes Hospital, which went broke during the virus crisis and is presently changed to something else. Further is the Saver’s appliance store, during our Navy waning years it was an empty warehouse; I buy stuff there. In front at right are many motor bikes. Again is sign of Philippine times; here were more that 50 motorbikes, a bunch of bikers came to the Subic Beach on this day and could not fit all the bikes into this, of first private beach places.

Zf491. Picture 073 is special to me for two reasons; these are massive pilings holding up a concrete deck. I believe that was where the 1945 Navy Supply Depot Pier connected to the shore. The other thing that fascinates me about this picture is that about a decade or so ago people were able to spread out underneath there, there was enough room to stand, sit and prepare a picnic on the beach in the shade under that solid roof. The Subic Bay waves, have built up the beach area so much in a decade that one can’t ever crawl under there anymore; the forces of nature!

The 3rd album with 24 images uploaded into this 3rd of 3 albums about my Oct. to Dec. 2021 random images in high resolution; this is the URL, click here:

Zf492. Images # 078, 079 & 081 are about a unique place, it is called: “CMC Double Suds Bar and Grill & Car Wash”. It is located at a grand beach area called Pundaquit which is part of San Antonio, Zambales where our San Miguel Communication Station used to be, now a Philippine Navy Training Center. In Pundaquit expats created another unique resident area with great homes and even better landscaping. They have a grand view of the Capones Islands. One of those residents with spouse and family created this Bar & Grill of the expat community here and visitors come from afar, to meet friends and spin the yarn. Two pictures show the bar area and one shows the landscaped rear of the lot, where places are to stay overnight

Zf493. Images 098, 099 & 100 were shot on the 11th Nov. 2021 and almost on time but I was about 41 minutes late. The Returned Services League Australia, Subic Bay Branch remembered the important date of world history, the end of WWI and the beginning of WWII. They held it in the back of the Palm Tree Hotel in Barretto.

Zf494. This is one of 5 pictures that show the remains of the U.S. Navy Pier at the barangay (village or barrio) Barretto in Olongapo City at the shore of Subic Bay. The picture numbers are 101, 103, 104, 105 & 107. The pier was built in 1945 when this area was called Maquinaya, from the name of the river that drains this valley. I believe this Maquinaya military area was returned to the Philippine Authorities around 1959 and now it is an international known tourist spot. This is one of the lowest tides I ever saw here in Barrio Barretto.