Escape from Corregidor in WWII 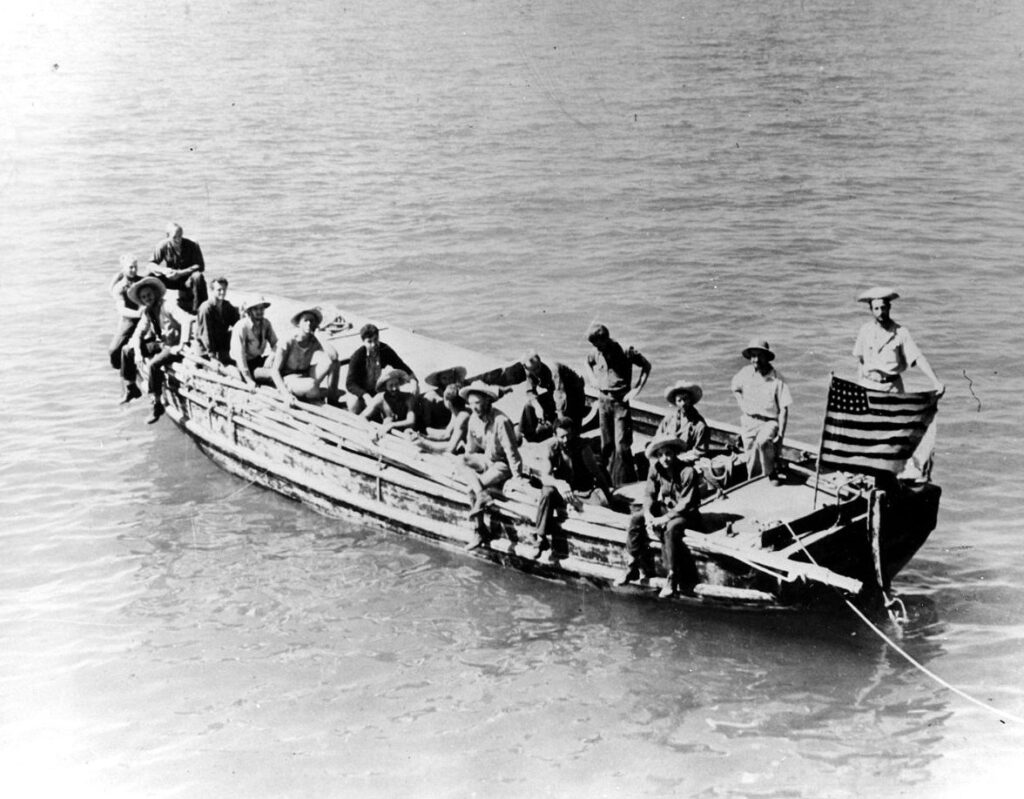 Zf177. The Commanding Officer of the USS Quail with 17 of his men executed this legendary escape from Corregidor to Australia in May-June 1942. As a retired US Navy Sailor and a student of WWII and resident near Corregidor, this story has fascinated me. So, this is a collection of images and information available in the www. This picture was copied from the Navy All Hands Magazine Jan. 1986 edition.

The harrowing true-story of Lt. Cmdr. John Morrill’s (CO USS Quail) desperate escape (with 17 of his men) from the Japanese in the early days of WWII.

On the evening of 6 May, 1942, hours after US Army General Jonathan Wainwright surrendered all US and Filipino forces on the island of Corregidor and other fortified islands in Manila Bay to the Imperial Japanese Army, 18 US Navy sailors from USS Quail began their daring escape to freedom.

Using a 36 foot Navy motor launch, the 18 sailors, led by Lieutenant Commander John Morrill began their 2,000 mile journey through Japanese infested waters. With only a watch, compass, homemade sextant and a few maps it was an incredible feat of navigation.

Lt. Cmdr. John Morrill wrote this book: “South From Corregidor” shortly after the escape and it is available from many sources. This is the cover and description, presented by this publisher (Z-Library), click here:

Zf189. I just learned that the book:”South From Corregidor” by Lt. Cmdr. John Morrill is available as a Facebook permalink, as a pdf file, uploaded by: Steve Gibson into the Facebook group: WWII in the Philippines and this is the link, click here!

The first 5 images in this presentation were copied from the Navy All Hands Magazine Jan.1986 edition, pages 6 to 15, click here.

Two weeks later, 13 of the men were back in the Pacific, fighting the Japanese from the destroyers of Commander Squadron 4. Morrill, Gunner Taylor, and the remaining three men were transferred to duty stations in the United States. Binkley was killed in action, and another crewman died before the war ended. Fourteen of the crew retired with 20 or more years in the
U.S. Navy
Photo from the January 1986 edition of All Hands magazine

This picture was copied from the Navy All Hands Magazine Jan. 1986 edition.

Zf179.   The route of the escape from Corregidor by Lt. Cmdr. John Morrill’s (CO USS Quail) desperate escape (with 17 of his men) from the Japanese in the early days of WWII. This picture was copied from the Navy All Hands Magazine Jan. 1986 edition.

Zf180. The crew of the USS Quail, when making their escape from Corregidor in WWII, made their U.S. Flag from a mattress cover, torn pieces of sheet dyed with Merthiolate, and a crewman’s shirt sleeves. This picture was copied from the Navy All Hands Magazine Jan. 1986 edition.

Zf181. Lt. Cmdr. Jack Morrill (CO USS Quail AM-15) is relaxing in Australia after his desperate escape (with 17 of his men) from the Japanese in the early days of WWII. This picture was copied from the Navy All Hands Magazine Jan. 1986 edition.

Zf182. The crew of the USS Quail actually escaped from the Island of Caballo, Fort Hughes. This 1941 Corregidor and Caballo map came from Military History now. They also have an interesting write-up of the USS Quail escape from Corregidor, Caballo Island in WWII, click here.

Zf183. USS Quail in the Philippines; U.S. Navy photo from the January 1986 edition of All Hands magazine

Zf184.  USS Quail AM-15 from the this Navy source webpage, click here:

Zf185. Navy Cross awarded to Lt. Cmdr. Jack Morrill for his heroic action during the Japanese bombing of the Cavite Navy Yard in Dec. 1941, click here:

The President of the United States of America takes pride in presenting the Navy Cross (Posthumously) to Lieutenant Commander John Henry Morrill, United States Navy, for extraordinary heroism and distinguished service in the line of his profession as Commanding Officer of the Minesweeper U.S.S. QUAIL (AM-15), in combat against enemy Japanese forces during the bombardment of Cavite Navy Yard, Philippine Islands, on 10 December 1941. Despite the fires and frequent explosion of air flasks and war heads, Lieutenant Commander Morrill while in command of a small auxiliary craft, displayed extraordinary courage and determination in proceeding into the danger zone and towing disabled surface craft alongside docks to a safe zone. This prompt and daring action undoubtedly saved the crews from serious danger and saved the vessels aided for further war service. The conduct of Lieutenant Commander Morrill throughout this action reflects great credit upon himself, and was in keeping with the highest traditions of the United States Naval Service. He gallantly gave his life for his

Zf186. Secretary of the Navy, Frank Knox, pins the Silver Star medal on Machinist N. G. Cucinello, USN, during the commissioning ceremonies of USS Iowa (BB-61), 22 February 1943, New York Navy Yard, Brooklyn, New York. Machinist Cucinello, a member of the Iowa crew, was awarded the Silver Star for his heroism in scuttling USS Quail (AM 15) at the time of the Japanese invasion of the Philippines
U.S. Navy photo NH 70073

The President of the United States of America takes pleasure in presenting the Silver Star to Chief Watertender Nicholas George Cucinello, United States Navy, for gallantry in action against the enemy while serving on board the U.S.S. Quail (AM-15), after that vessel was ordered scuttled in the Philippine Islands on 6 May 1942. After it became apparent that the fall of Corregidor was imminent, Chief Watertender Cucinello volunteered with others to assist their commanding officer in performing this task, left the shelter of Fort Hughes and raced through exposed areas of the Fort Hughes dock while that place was under heavy artillery barrage. Upon their arrival at the dock they found their ship’s small boat sunk and, accordingly, had to swim 200 yards to another boat anchored at the dock. While in the water Chief Watertender Cucinello and his comrades swam through Japanese artillery fire and numerous airplane strafing attacks, but reached the small boat nevertheless. He then proceeded with his comrades to the QUAIL, continuing to dodge artillery and airplane machine gun fire en route, until the minesweeper was reached and scuttled. By his great effort, Chief Watertender Cucinello materially assisted in accomplishing this difficult and dangerous task. His conduct throughout reflects great credit upon himself, and was in keeping with the highest traditions of the United States Naval Service.

Zf187. c. 1933-1934 French Frigate Shoals, Northwestern Hawaiian Islands. A Loening OL-8 observation aircraft from Utility Squadron SIX (VJ 6) prepares to hook on to Quail’s crane
Photo courtesy of the National Naval Aviation Museum. This picture was copied from the above link to the USS Quail AM-15 Navy source webpage.

Morrill’s log of that epic journey is now resting in Norfolk, VA, at the MacMem.

I’ve read the book, but imagine my surprise and delight when I discovered among my father’s papers and memorabilia a thin document which turned out to be Morrill’s log of that epic journey. It now rests in Norfolk, VA, at the MacMem.

Peter Parson is a well known personality, with partners; he is a producer of WWII documentaries. He is also the son of WWII Hero in the Philippines, Chick Parsons. You can find both names in the www and in our Corregidor Forum.