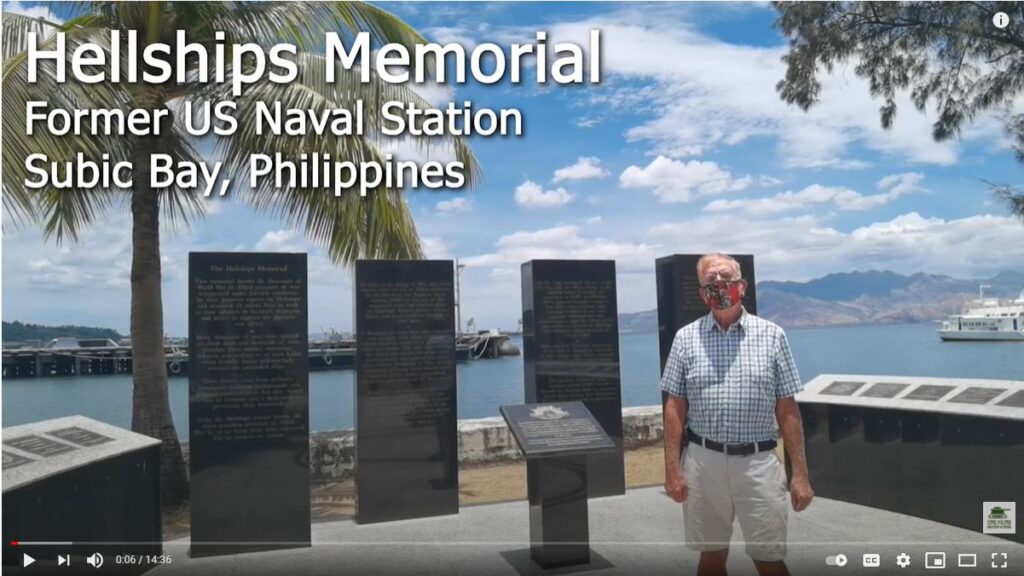 Zf142. This is the Hellships Memorial in Subic Bay, located only a few hundred feet from the wreckage site of the Oryoku Maru. Picture, courtesy of Pacific War Stories video, this is the opening image of the video. The speaker, shown in this picture is LCDR Gerald Anderson, who was the principle person who created this Hellships Memorial!

Oryoku Maru – the notorious Japanese POW Hellship, this video is presented by the Pacific War Stories. This is a video, made very recently, available on YouTube, click here:

This is the Pacific War Stories description of this video, the story of this Hellship:

THIS is the story of 49 days of savagery and tragedy unequaled in the annals of the war in the Pacific. The story begins in Manila. December 13, 1944.

It is the story of a torturous journey on prison ships from Manila to Japanese, during which men died from Japanese bullets, American bombs, suffocation, disease, starvation, and murder.

It is the story of a man-made hell from which only 300 Americans emerged alive from the more than 1,600 that started this cruise of death.

Those who did make it to Japan were subject to further abuses and neglect as well as another hellish trip at sea, this time to Korea, where, at the end of the war, U.S. authorities could find only 128 of Oryoku Maru’s POW survivors, a mere eight percent of the total number of POWs on board when the ship had departed the Philippines en route to Japan in December 1944.

Japanese treatment of Allied POWs was deadly in and of itself, Allied sinkings of hell ships notwithstanding. Even in a case like that of Oryoku Maru, with so many survivors, a prisoner’s chances of making it to the end of the war were slim.

Screen shots from the above video:

Zf143. The after hole was loaded first with senior Officers; it was a hell, watch the video. Picture, courtesy of Pacific War Stories video

Zf145. For 5 days about 1300 POWs were kept on this small tennis court, exposed to the hot sun, almost no water and a few table spoons of uncooked rice. Picture, courtesy of Pacific War Stories video

Zf146. The unrecognizable wreck of the Oryoku Maru, where she is resting near the Hellships Memorial in Subic Bay. Picture, courtesy of Pacific War Stories video.