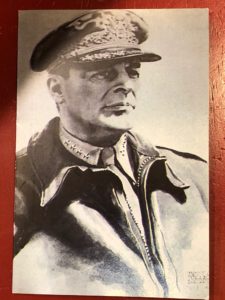 I received this picture on the 27th Dec. 2018 from Brendan Murphy. Brendan Murphy is the son of famous artist John Cullen Murphy. Brendan and I served together in the Navy Diving School in Pearl Harbor in 1984. He was a very good Petty Officer. He made Master Diver and Master Chief Petty Officer. He still works for the Navy as a civilian and recertifies diving systems on Navy ships. That is why he came here, to Subic Bay, a few years ago to recertify a system on a ship. It was great reunion between shipmates after 30 years.

Karl,
A copy of one of Dad’s paintings. Notice it was early in the war when he had only 4 stars. The original is signed by the General.

On the same day Brendon sent another email and sent this:

Merry Christmas to you and yours!
I was just taking another look at my Dad’s signature and it says Captain. This would mean that he had probably started to serve as General Maquette’s aide.
Brendan

Karl continues:
This picture looks very similar than the picture I posted in this thread 14th Aug. 2018 and I cannot tell whether it is the sam or not. But there are some differences.