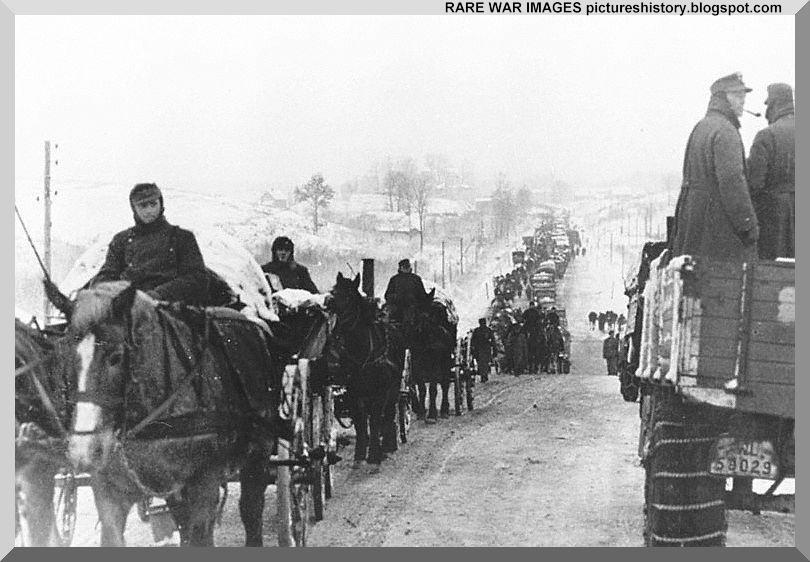 Zo571. GERMAN-ARMY-RUSSIA-SOVIET-UNION-WW2-SECOND-WORLD-WAR-IMAGES-PICTURES-PHOTOS-HISTORY-008
February 1944. A pathetic sight. The once mighty German army withdraws from Leningrad area on horse-carts. Curtesy of: https://pictureshistory.blogspot.com/ or click here

A collection of WWII images from the world wide web (WWW). These are pictures that drew my attention or are telling me a story that interests me. 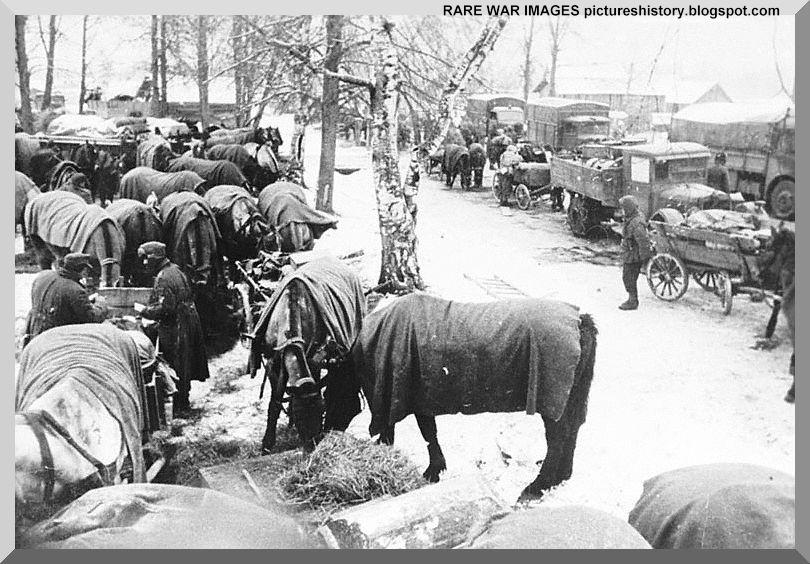 Zo572. GERMAN-ARMY-RUSSIA-SOVIET-UNION-WW2-SECOND-WORLD-WAR-IMAGES-PICTURES-PHOTOS-HISTORY-009
February 1944. A pathetic sight. The once mighty German army withdraws from Leningrad area on horse-carts. Curtesy of: https://pictureshistory.blogspot.com/ or click here 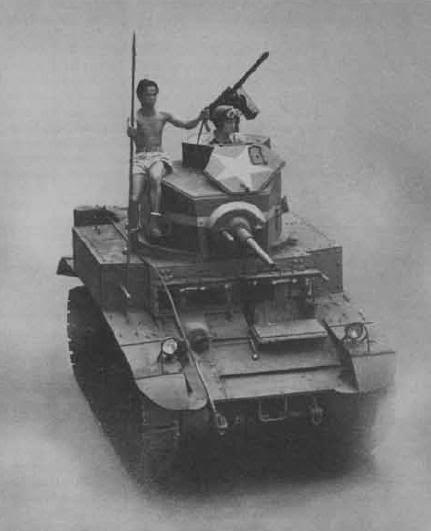 Zo573. Igorots: The unsung heroes of Bataan. The exploits of the Igorots were circulated in the US as part of the war drive. This photo appeared in one of those campaigns: Photo and words from batteryboy, Corregidor.proboard.com senior member batteryboy!

The story is told in this Corregidor.proboards.com webpage or click here:

DURING the siege of Bataan in 1942, the Japanese landed at Anyasan, Quinauan and Longoskawayan Points at the western coast of Bataan, but they were quickly eliminated. The battle became known as the “Battle of the Points.”

The Japanese also infiltrated through gaps in the sector of the I Corps. The tanks sent by General Fidel Segundo to wipe out the pockets could not penetrate the jungle. The heroic action of Igorot troops in helping eliminate these pockets was described by the New York Times (Feb. 23, 1942) thus:

“Hampered by the dense undergrowth and lost in the confusing maze of bamboo thickets, vines, and creepers, the tankers would have been impotent had it not been for the aid of the Igorot troops of 2d Battalion, 11th Infantry. Hoisted to the top of the tanks where they were exposed to the fire of the enemy, these courageous tribesmen from north Luzon chopped away the entangling foliage with their bolos and served as eyes for the American tankers. From their position atop the tanks they fired at the enemy with pistols while guiding the drivers with sticks.” The pockets were eliminated.

This was called the “Battle of the Pockets.” 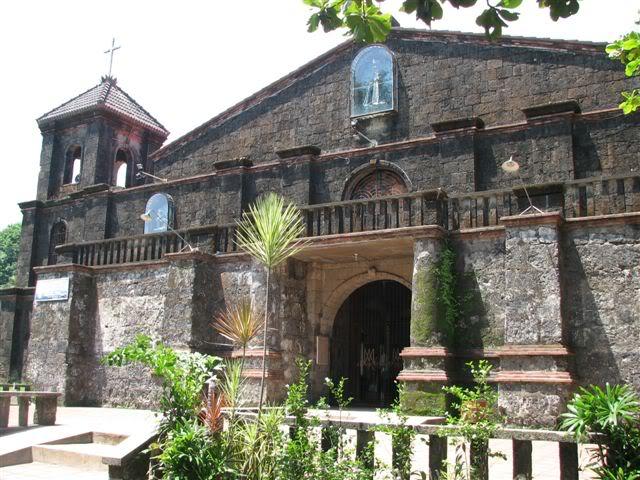 Finally visited Morong, Bataan with Karl. I promised Col. Ed Ramsey back in 2009 that on my next trip to the Philippines I’d visit Morong and take pictures for him. After walking around in Layac (First line of defense, into Bataan 7th Jan. 1942), we took the new highway to Subic and went down Bataan’s west road down to Morong.

Vic provided this link for the following, click here: 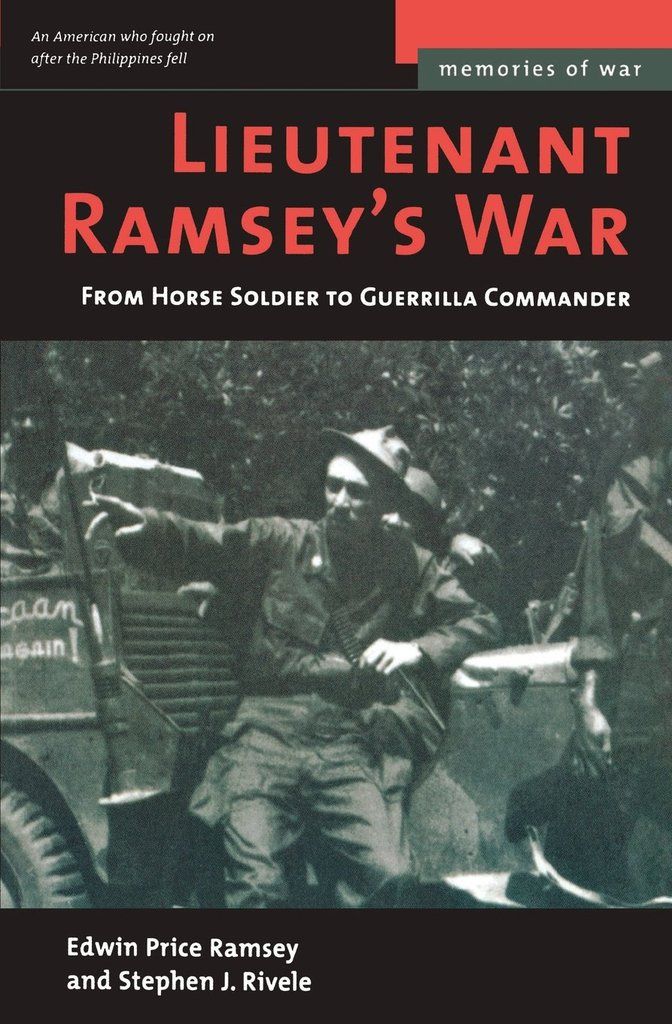 Zo575. Lieutenant Ramsey’s War: From Horse Soldier to Guerrilla Commander (Memories of War). Vic is or was the web master of the pinoyhistory.proboards.com and wrote the thread above; he said this about the picture Zo576:

I recently wrote about Ramsey and the Charge at Morong by 26th Cavalry Philippine Scouts. Worth noting that this was the last charge by a United States Cavalry Unit (The Scouts were US Army, not Commonwealth).

My copy of the book had a different cover. I think it’s the older printing. I was able to have mine signed by Ed Ramsey by mailing it to him. Philip on the other hand got lucky and actually got to meet the hero in person and with his pictures taken to boot.

“There were three trails branching left off the road through Morong toward the sea. I signaled column left at the middle one, deployed the platoon in column of squads of eight men each, and gave the command to raise pistols. We watched as the point riders entered the town. There was silence as they made their way among the thatched huts. I ordered the troop forward.

Morong looked deserted. The huts stood empty on their bamboo stilts, the pens beneath them long stripped of livestock by the retreating Allied army. The village center was the Catholic church, its only stone structure, and it too was closed up against the advancing Japanese. Beyond lay thick groves of coconut palms inclining through a swamp toward the sea, while to our right crossed by a single wooden bridge, was the narrow Batalan river, the line that Wainwright wanted to occupy.

We moved carefully toward the village center, the horses maneuvering head-high among the woven huts, the men alert for movement. I watched the point guard turn in at the church square and disappear from sight, and then there was an explosion.

Rifles and automatic weapons burst out from the center and northern end of the village, echoing among the huts and sending jungle birds screaming. In a moment the point men came galloping back, one of the privates streaming blood across his horse’s neck and flanks. An advance guard of the Japanese army had crossed the river and was passing near the church just as we had entered the village from the side.

Now I could see scores of Japanese infantries in brown fatigues firing from the village center, and behind them hundreds more wading the river and crowding toward the Batalan bridge (the river is now called the Morong River). In a few minutes more, the main body would be flooding across to seize Morong.

Over the rattling of gunfire, I ordered my troopers to deploy as foragers, and raised my pistol. A charge would be our only hope to break up the body of Japanese troops and to survive against their superior numbers. For centuries the shock of a mounted charge had proved irresistible; now the circumstances and all my training made it instinctual.

I brought my arm down and yelled to my men to charge. Bent nearly prone across the horses’ necks, we flung ourselves at the Japanese advance, pistols firing full into their startled faces. A few returned our fire, but most fled in confusion, some wading back into the river, others running madly for the swamps…

The charge broke clear through the advance unit and carried on to the swamp, where we dismounted and grabbed our rifles from the scabbards. I threw out a skirmish line of one squad along the river to keep the main column from crossing and led the rest back into Morong to search for snipers.” 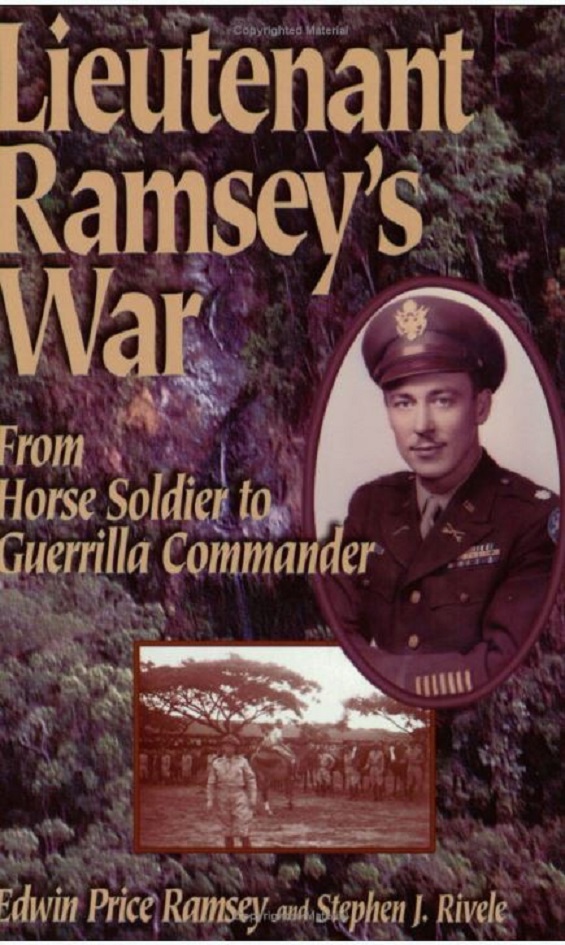 Zo576. An earlier or later issue of the book had this book cover. It came from this URL and had this description, click here:

After the fall of the Philippines in 1942 – and after leading the last horse cavalry charge in U.S. history – Lieutenant Ed Ramsey refused to surrender. Instead, he joined the Filipino resistance and rose to command more than 40,000 guerrillas. The Japanese put the elusive American leader at first place on their death list. Rejecting the opportunity to escape, Ramsey withstood unimaginable fear, pain, and loss for three long years. Lieutenant Ramsey’s War chronicles a remarkable true story of courage and perseverance. 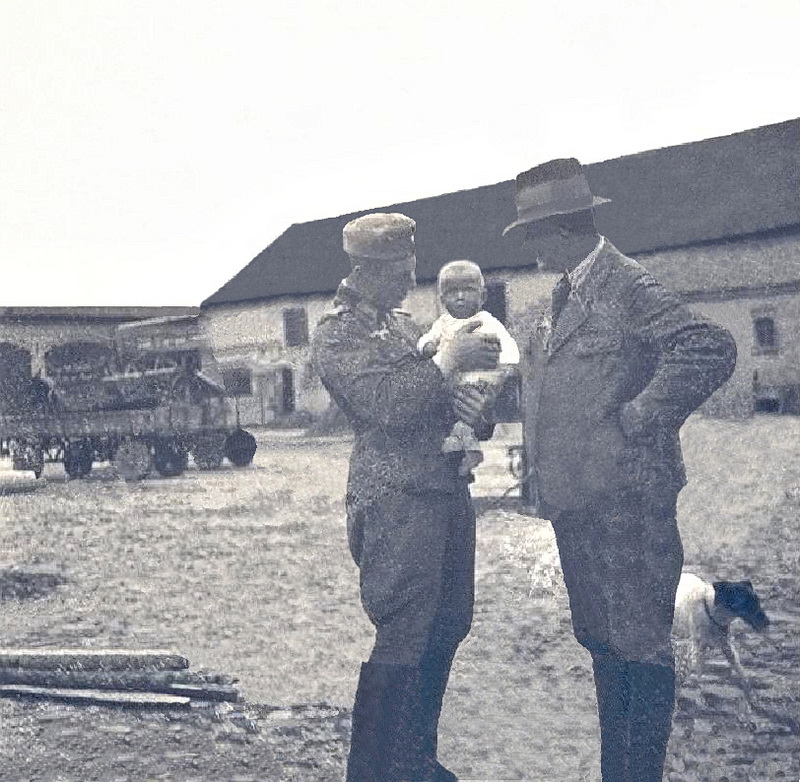 Left my uncle Helmut Voje, joined the Wehrmacht 1938, started in the cavalry, served thru the whole war, got killed on the 10th of May 1945 on his march with his troops from east to west thru the now Czech Republic. He is listed on a plaque in a German War Cemetery in the Czech Republic. His wife still lives, and is now 99 years young.

He is holding me, just a few months old. My family was able to flee before the Red Army arrived on the 30th of Jan. 1945. I grew up near Hamburg, emigrated to the U.S.Dec.1959, served in the U.S. Navy 1960-91. I retired in the Philippines outside the former Naval Base Subic Bay.

Right is my father, Karl Welteke, born 1900. During the war he managed our farm and others. In 1944 he was drafted into the Volkssturm and fell in the Battle of Berlin. The last we heard from him was on the 17th April 1945. 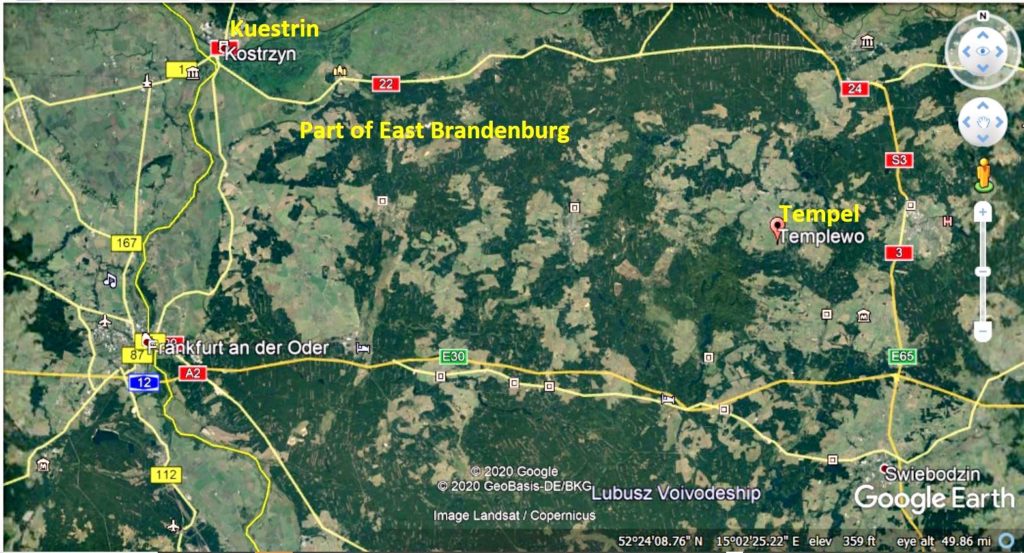 Zo578. A google Earth image of the area of the former German East Brandenburg province. My village Tempel is about 60 km east of Frankfurt on the Oder River but I don’t remember it or my father.

My memory starts in the spring of 1945 and in North Germany. I remember watching the nightly bomber streams and their flares, which the Germans called Christmas trees. Going into the cellar when fighter bombers were in the area. And one day the place was full of British tanks and they looked awfully big to a 3-year-old child. 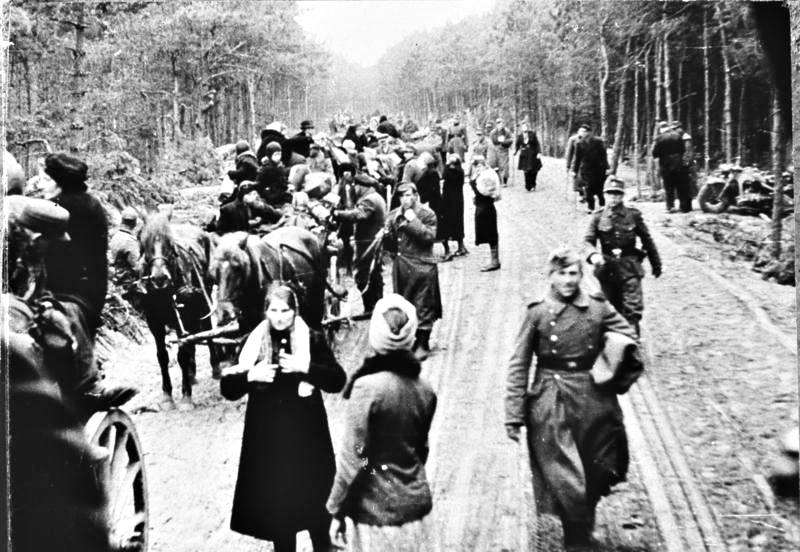 Zo579. A picture of Germans in flight in East Prussia from Wikipedia.

My mother and us 3 small children, youngest sister 3 months old, oldest sister 1 year 9 months and me 2 years and 10 months were able to flee from the Red Army on the 30th Jan 1945.

A train came into Tempel, offloaded Volkssturm troops, and perhaps half of the village families decided to flee with the train, all the French POWs, working on the farms, also went. Then in the summer the remaining Germans were driven out on foot and with what they could carry.

We were taking in by my mother’s best friend’s family farm in Lower Saxony (home of a British King).

Japanese artillery in the Battle of Bataan and in the Siege of Corregidor, 3 images. 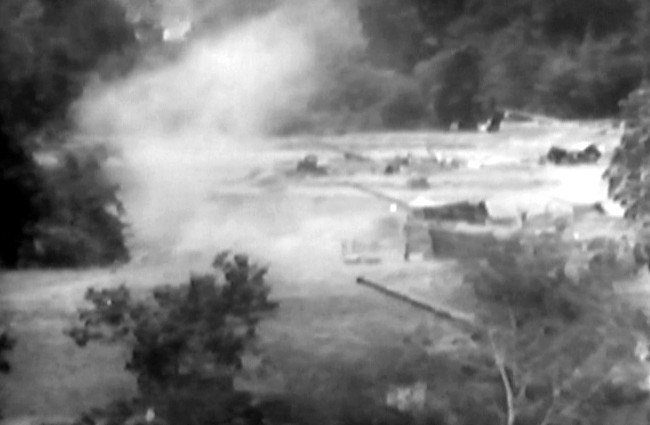 Zo580. A battery of Japanese 150mm Type 89 guns at located somewhere between the Lamao – Cabcaben area in 1942. This picture was provided by Tony Feredo, aka batteryboy. He posted 9 images in this thread or click here: 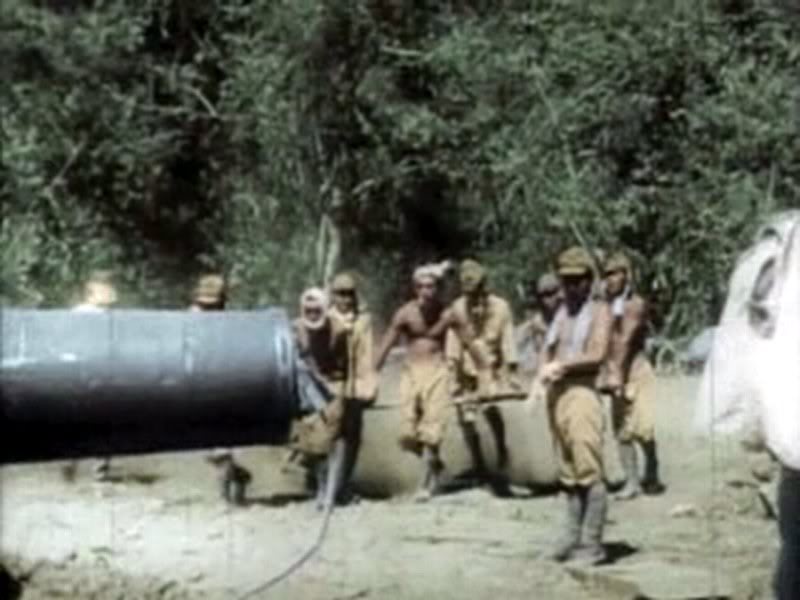 Zo581. Japanese setting up a 240mm Type 45 Howitzer before the Corregidor bombardment, crew men are dragging the gun shield. This picture was provided by Tony Feredo, aka batteryboy. He posted 9 images in this thread or click here: 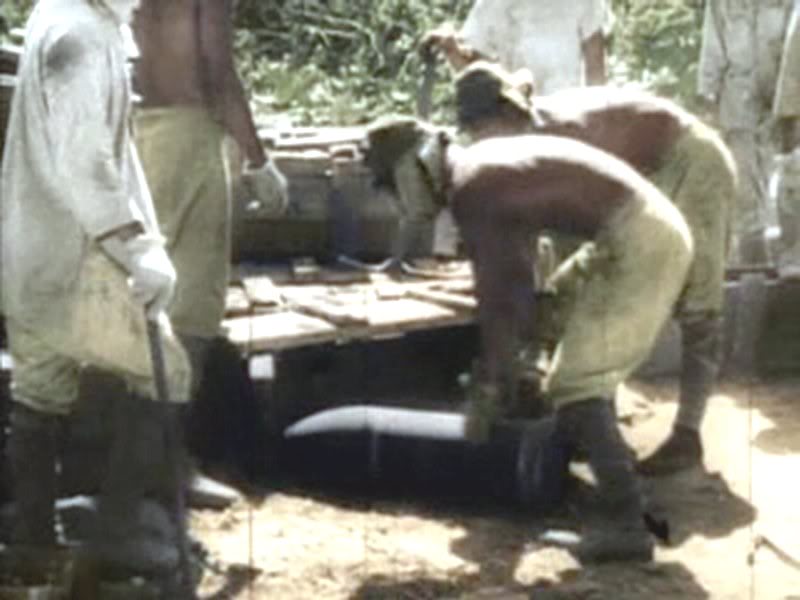 Zo582. Japanese setting up a 240mm Type 45 Howitzer before the Corregidor bombardment, crew men are handling some of the projectiles. This picture was provided by Tony Feredo, aka batteryboy. He posted 9 images in this thread or click here:

Philippine Silver dumbed into Manila Bay. Before the fall of Corregidor, it was decided to ship the gold out by submarine, burn and record the high money bills and bank documents and because of the weight factor to just dumb the silver Peso coins in the San Jose Bay. 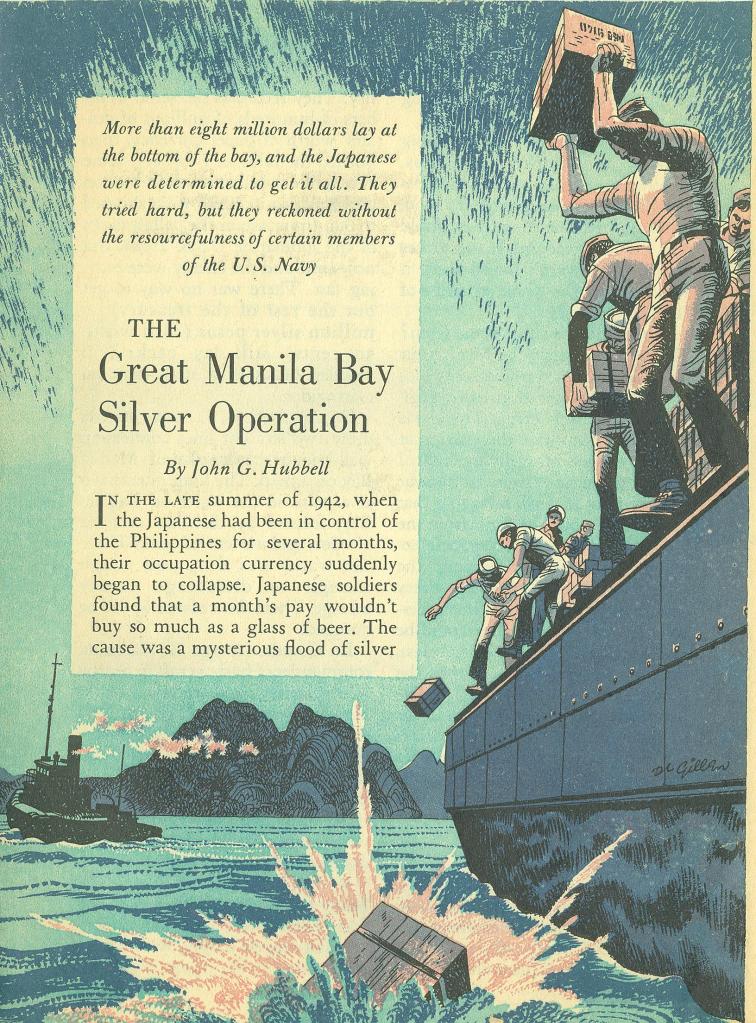 Zo583. This is one of 11 images and story presented in this Corregidor.proboard.com forum page. The story also includes that the Imperial Japanese occupiers forced U.S. Sailors, they held as POWs to dive to recover the silver. This is the URL, or click here: