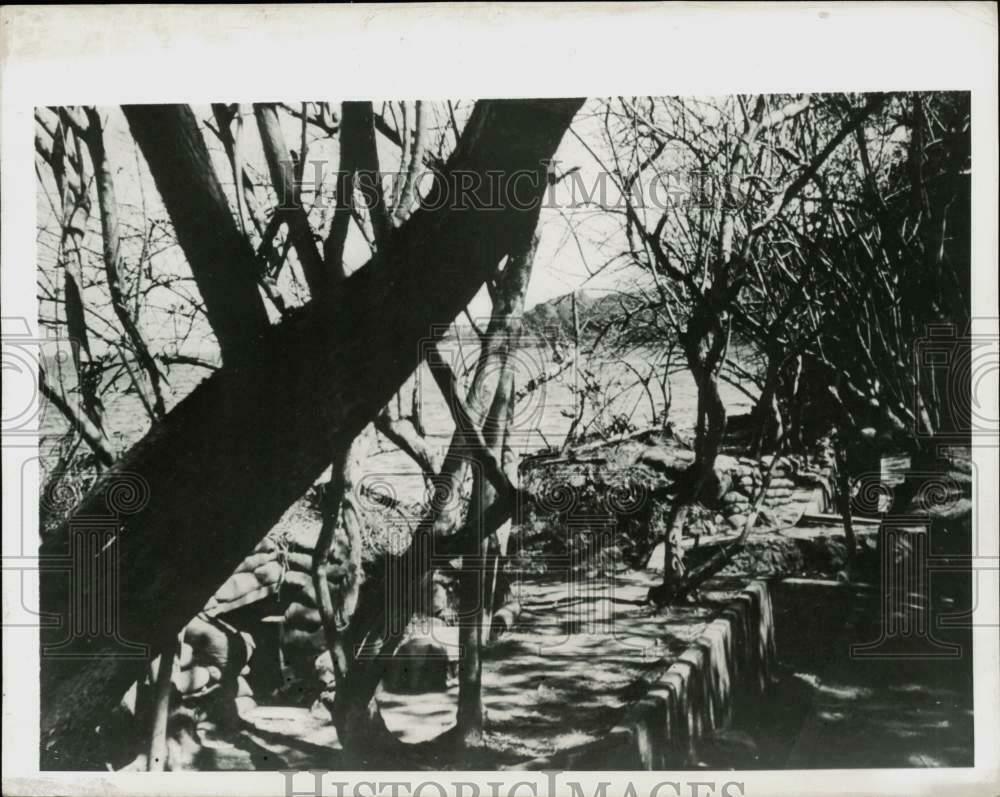 Zf348. This picture must be a Corregidor defense position, a concrete trench. The picture description says it is a Marine Shore Defense Position on Bataan. But the description says that Corregidor surrendered today with the date 5-6-42. See the next images with more details. The photo is credited as an official U.S. Marine Corps Photo from ACMF. It was sent to me by the Army Lt. Chester K. Britt Research Team who finished writing their book: “Relentless Hope: A True Story of War and Survival, by David L. Britt”.

This picture with the description seems to be on sale in the internet and a friend asked this: “Karl, any value in this photo and the caption?   Looked everywhere and can’t find it ever used in a newspaper.   No Marines visible in it.    Wondering if you’ve ever come across what might be these trenches (major long shot with all that shoreline).  My answer follows under the next picture.

This album and maybe others in the future, is started to present miscellaneous items that don’t seem to fit in the existing Corregidor album groups.

Zf349. This is the description of the previous image. This picture with the description seems to be on sale in the internet and a friend asked this: “Karl, any value in this photo and the caption?   Looked everywhere and can’t find it ever used in a newspaper.   No Marines visible in it.    Wondering if you’ve ever come across what might be these trenches (major long shot with all that shoreline).

Here is my answer. We have a page entry in the forum, click here, with input mostly from John Moffit.

We know of more trenches on Corregidor, in front of three ravines, James, Ramsay and Government Ravines. At Geary point is a long trench connecting gun positions, I would call that a trench.

Then there is a long, wide and high trench at Wheeler Pt., it is located on top of the cliff but at the edge like for defense.

The descriptions got several things wrong; they were built by the army, prewar so it is wrong to call them Marine Trenches. And the trenches did not hold the Japanese landing parties for weeks and weeks.

The Japanese landed just before Midnight on Corregidor and by noon next day, the 6th of May it was all over. Gen Wainwright surrendered.

The Marines defended Corregidor, not Bataan; Gen MacArthur assigned the 4th Marines to do that, with concurrence of the Far East Naval Command, when they arrived from China. Some Marines from the naval installations were defending the Mariveles naval compound and installation, including the Mariveles shorelines. But most of the defenders were US Sailors. As far as I can tell there were no concrete defense trenches on Bataan. And most of the Mariveles defenders, if not all, evacuated to Corregidor when Bataan surrendered

One more point the 4th Marines were about 700 Marines that came from China, picked up maybe another 800 from the naval installations in the Philippines. During the Siege of Corregidor the 4th Marines swelled to over 3000 men, so over one half of the 4th Marines were service members from the other services, Philippine Army, Philippine Scouts, US and Philippine Sailors etc. Particular the men of the battalion that defended the Tailend were maybe more than half of other service members. I can say, reading about the landings, that I never read that anyone run or left their post without orders, they done their duty well!