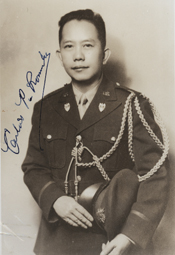 After the war he established a long record of Diplomatic Service to the Philippines. As a student of Philippine-American History he became a person of interest to me a long time ago, he should have a page in our forum!

Carlos Peña Rómulo, QSC CLH NA (14 January 1898 – 15 December 1985) was a Filipino diplomat, statesman, soldier, journalist and author. He was a reporter at 16, a newspaper editor by the age of 20, and a publisher at 32. He was a co-founder of the Boy Scouts of the Philippines, a general in the US Army and the Philippine Army, university president, President of the UN General Assembly, was eventually named one of the Philippines’ National Artists in Literature, and was the recipient of many other honors and honorary degrees. He was born in Camiling, Tarlac and he studied at the Camiling Central Elementary School during his basic education.

He was born in Camaling,Tarlac and because I have a personal connection to that town, my relation to him is almost personal. I will start this page with a few pictures and hopefully more will follow from me and others. When I googled him, Google said: About 8,440,000 results (0.61 seconds); this is the URL, click here:

Why did I start this page now? Friends of mine, the Army Lt. Chester K. Britt Research Team sent me these following items and said this:

A couple days ago, I happened to be browsing Ebay with the key word BATAAN, and up popped an auction for a 1942 War Gum card that kids collected then like baseball cards.   Turned out to be for Col Romulo.   I put in a bid on it; no one else was interested, so got this 1942 card for a whopping $3.95 with free postage.    Interesting to see he was already known as a hero in the US, then, even to American kids.    Just got it in the mail today, so here it is if you care to use it

Here are the two items!

The people of the Army Lt. Chester K. Britt Research Team are:

I noticed, we already have some pictures about Carlos Romulo in our forum, I will repost them here.

Zf152. U810. Gen MacArthur, with Gen Carlos Romulo at his side is approaching, on Navy PT Boats, the south shore, Bottomside of Fort Mills on Corregidor Island. It is the 2nd of March 1945 and the soldiers who liberated the Island, will present it this day to Gen MacArthur, who will order the flag raised and said let no enemy ever haul it down.

Zf153. V524. (02 161213 Gen). Romulo near US Embassy.1. This stature interested me very much; Carlos Romulo played important roles in the Philippine and US History. This monument was worked on before and I wanted to know the present condition. It is located pretty much in front of the US Embassy.

Two wreaths were laid by US Ambassador Thomas C. Hubbard and Mrs. Beth Day Romulo: one on the Camp O’Donnell Monument and the other on the Filipino Monument, right beside the American Monument.

Mrs Beth Day Romulo is married to the famous Filipino Personality General Carlos Romulo. She is also an accomplished writer. She was also then the President of the Corregidor Foundation Inc. (CFI).

Col. Carlos P. Romulo did a lot of information work in the U.S. during the war.

In this case he delivered a personal message of people he knew.

We have a webpage for Lt. William Roy Bell, U.S. Army Air Corps