USS Monterey BM-6 was part of the Philippine-American War 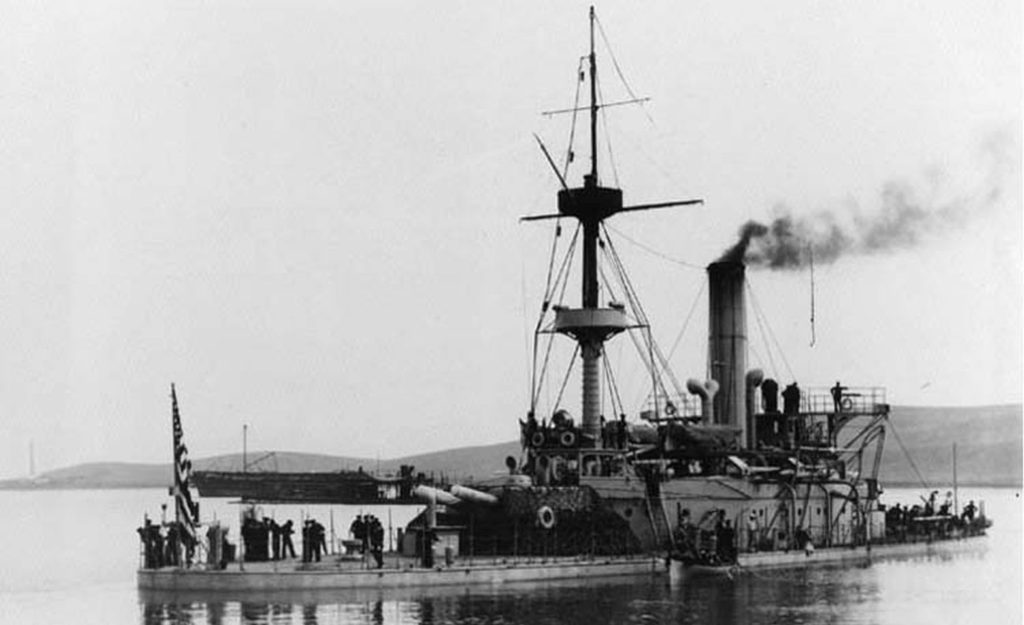 Ze694. The USS Monterey at Mare Island Naval Shipyard, circa 1896. The USS Camanche is visible in the background. This picture is from this Wikipedia’s URL, click here or copy and paste it:
https://en.wikipedia.org/wiki/USS_Monterey_(BM-6)

This war is often called in old records: Philippine Insurrection.

This is from this Wikipedia’s URL, click here or copy and paste it:

With the outbreak of the Spanish–American War and Commodore George Dewey’s great victory in Manila Bay 1 May 1898, the Monterey was ordered to sail for the Philippines to provide the Asiatic Squadron with big gun support against a possible attack by the Spanish 2nd Squadron, which included the battleship Pelayo and the large armored cruiser Emperador Carlos V.

Though not designed for extended ocean cruising, the big monitor departed San Diego, California, 11 June in company with the collier Brutus for Manila. Sailing via Honolulu and Apra, Guam, the ships made the 8,000‑mile voyage without mishap, arriving Cavite 13 August, and the Monterey remained in the Philippines, supporting the occupation of Luzon into 1899. On 18 September she commenced 5 days of operations in Subic Bay with the gunboats Charleston and Concord and the supply ship Zafiro, helping to destroy a large gun at the head of the bay on the 25th. She remained in the Philippines until 6 April 1900, then sailing for China, where she received new boilers at Hong Kong. The Monterey operating from July 1900 to September 1901 as station ship at Shanghai, voyaging upriver to Nanking from 25 to 31 July 1902 with Special Commissioner T. S. Sharretts on board for a diplomatic mission. The Monterey continued her operations along the coast of China from Chefoo to Hong Kong, and also served as station ship at Shanghai for short periods. She returned to Cavite in the spring of 1903 for repairs, and was decommissioned 15 December 1904.

The Monterey recommissioned in reserve at Olongapo Naval Station on 28 September 1907, but 8 1/2 months later was placed in ordinary on 7 May 1908. She remained at Olongapo, recommissioning in reserve through November 1911, and making brief voyages to Cavite, Manila, and Subic Bay for repairs and target practice. She was placed in full commission 9 November 1911 and two days later sailed for Amoy, China. The Monterey operated off the China coast to protect American interests at Foochow, Swatow, and Shanghai until, returning by Hong Kong to Cavite 16 November 1913. The Monterey returned to reserve at Olongapo 11 February 1913, and when World War I broke out in Europe moved to Cavite 11 August 1914. She returned to Olongapo in May 1915 and on 24 December sailed to cruise the Philippines, operating in the Manila‑Cavite area on drills, recruiting, and making an island patrol as far south as Zamboanga, Mindanao, returning to Cavite 29 June 1916.

The old monitor departed Cavite 13 November 1917, and was taken in tow by collier Ajax on the 15th. She proceeded by way of Guam to Pearl Harbor, arriving 19 December. Assigned as the station ship for Pearl Harbor Naval Station, the Monterey remained in service at the submarine base until she was decommissioned 27 August 1921. She was sold to A. Bercovich Co., Oakland, California in February, 1922, and towed across the Pacific to be scrapped. 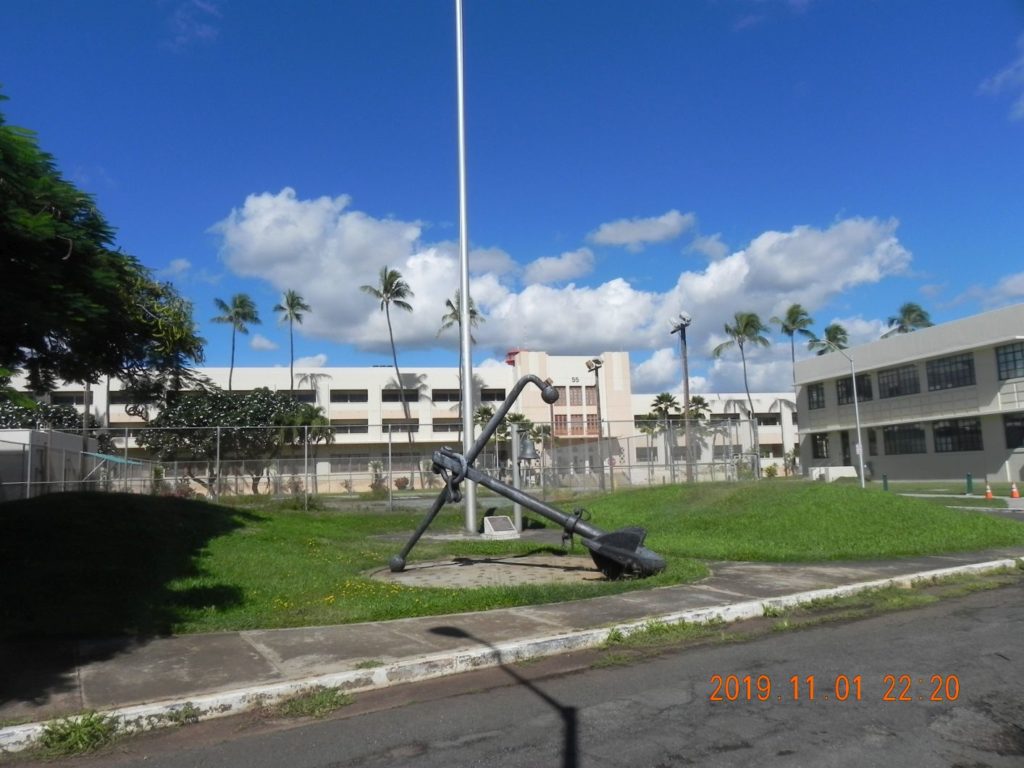 Ze695. A flagpole without a flag, an anchor, a ships bell on Ford Island, what is all this? 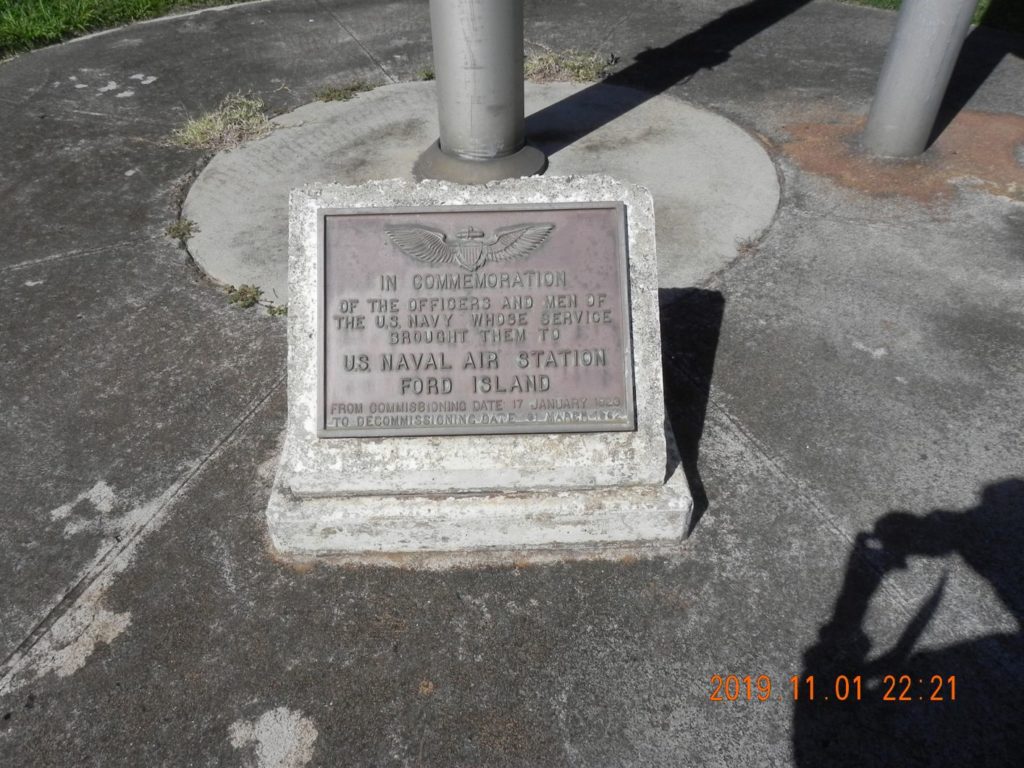 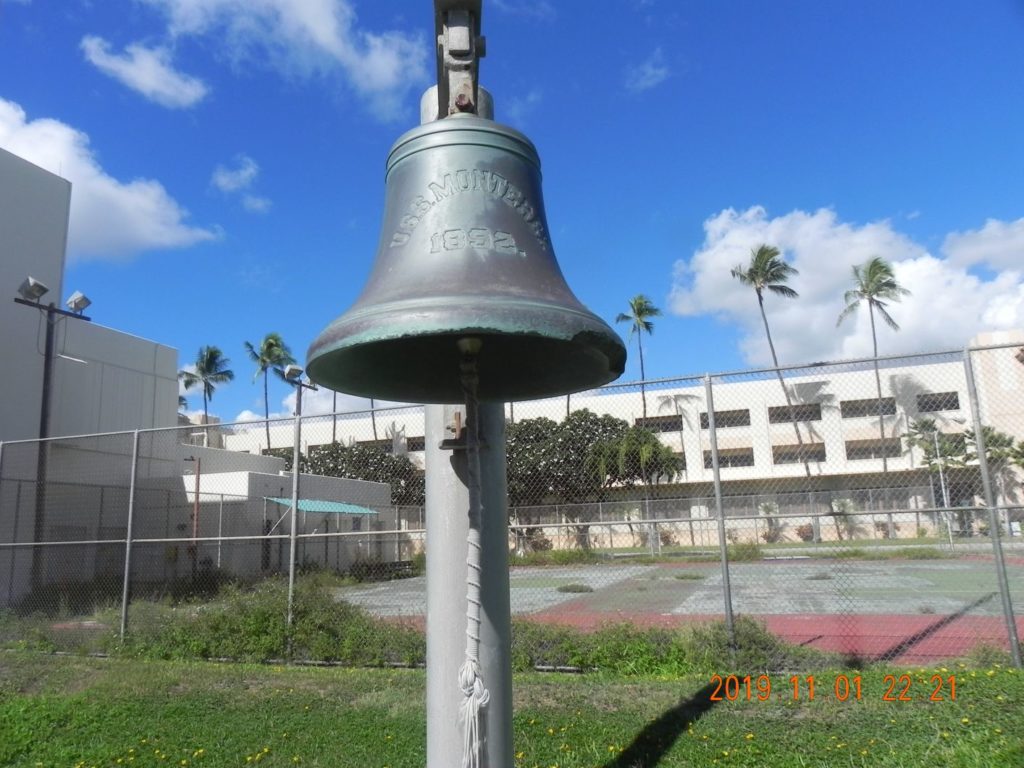 Ze697. The bell next to the former Ford Island Naval Air Station Flagpole and Plaque is the Ships Bell of the USS Monterey BM-6. I wonder how it got here?

Note from Karl: On the 2nd Nov. 2019 I walked around Ford Island and saw this former Ford Island Naval Air Station Flagpole, anchor and the USS Monterey Bell and started to research. I found several things and decided to build this webpage. 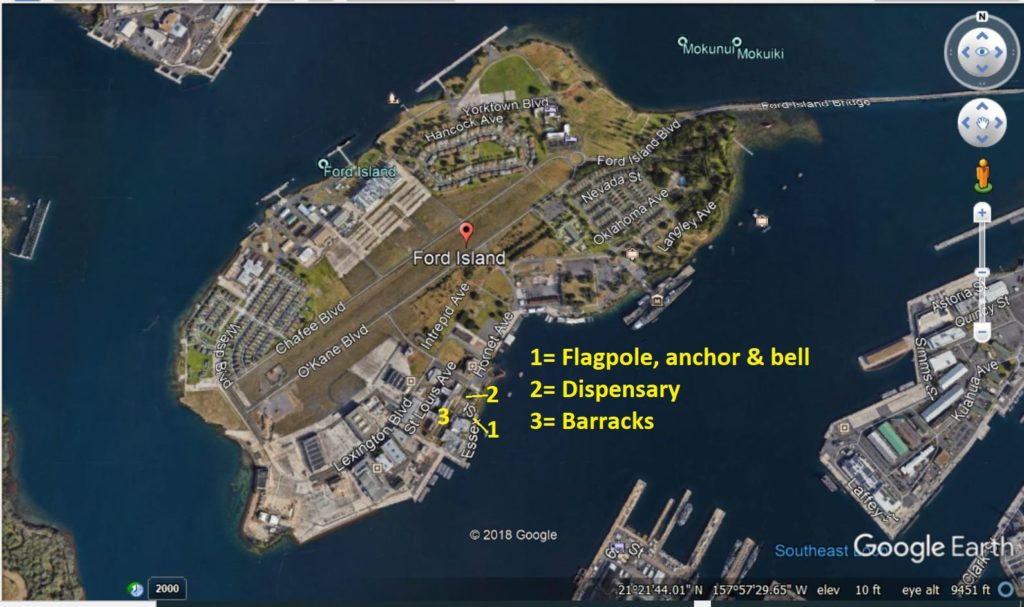 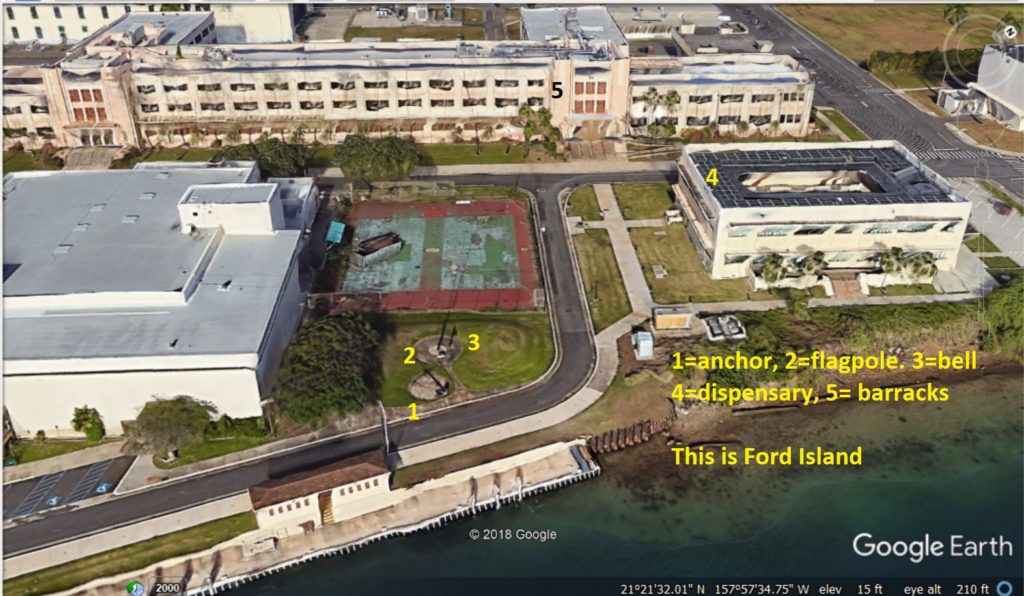 Here are four images of the USS Monterey in the Philippines or getting ready for deployment and are from this Naval History Heritage Command URL, click here or copy and paste it: 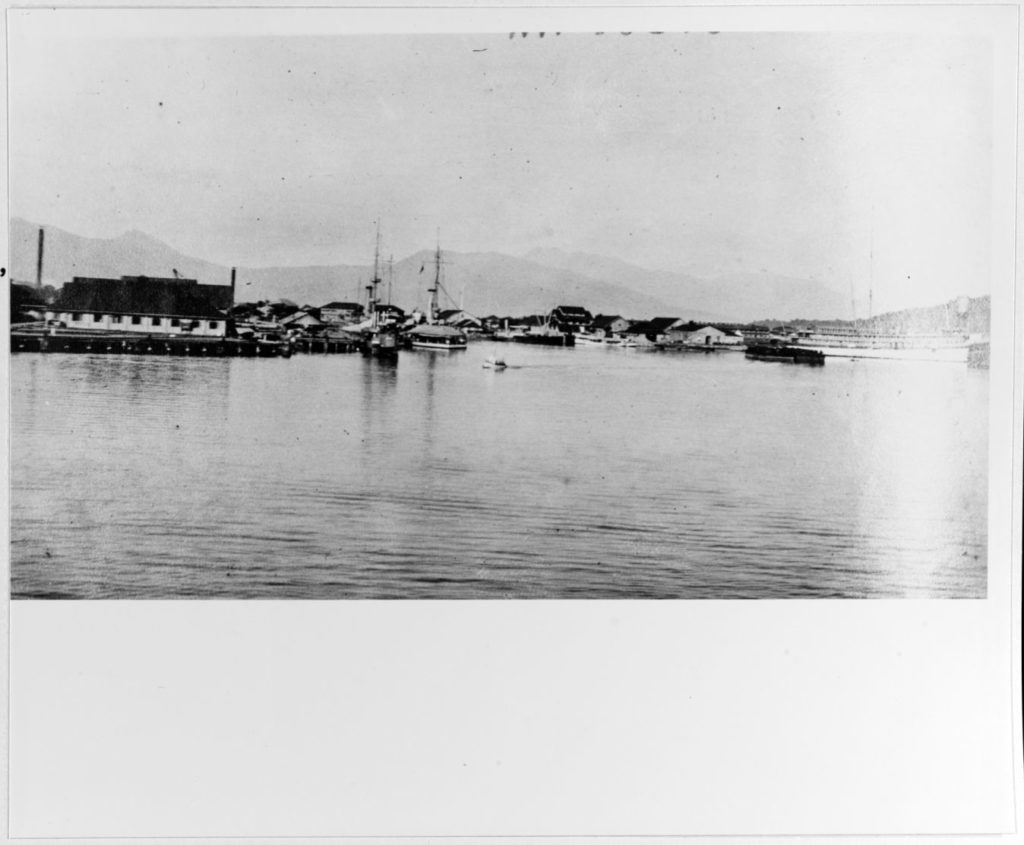 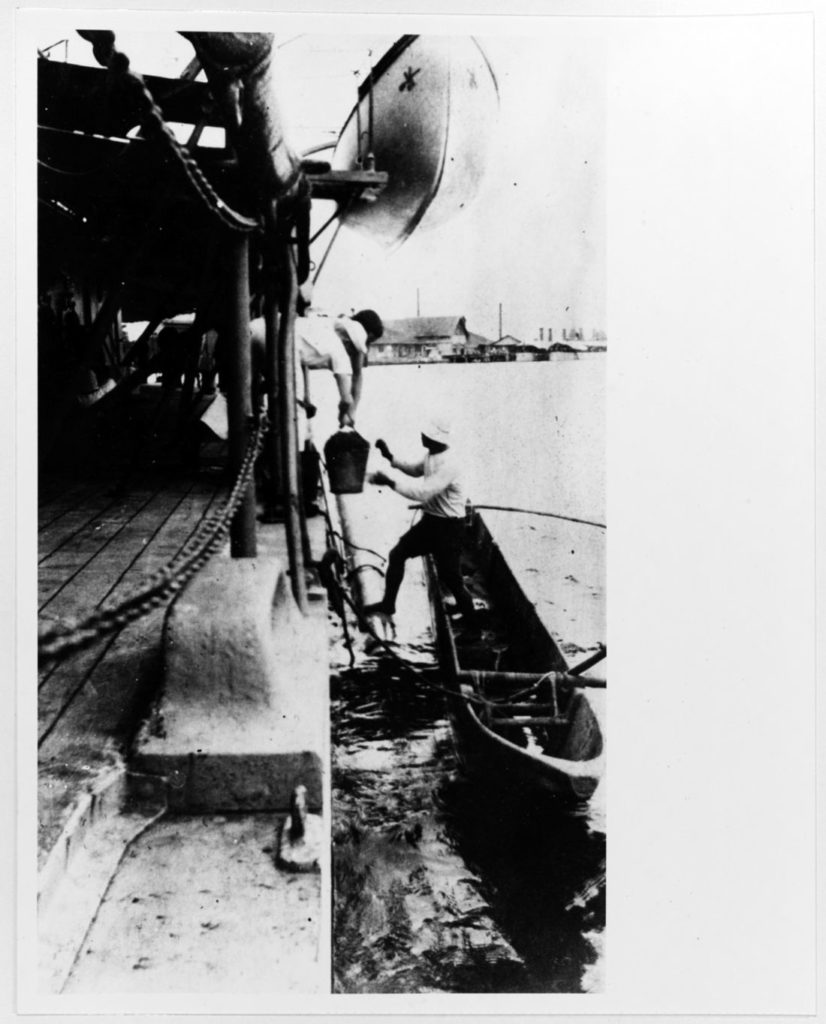 Ze701. Taking on board a bucket of sand, from a Philippine canoe, circa 1914. What was the sand for, a cleaning agent, for pets, I don’t know? 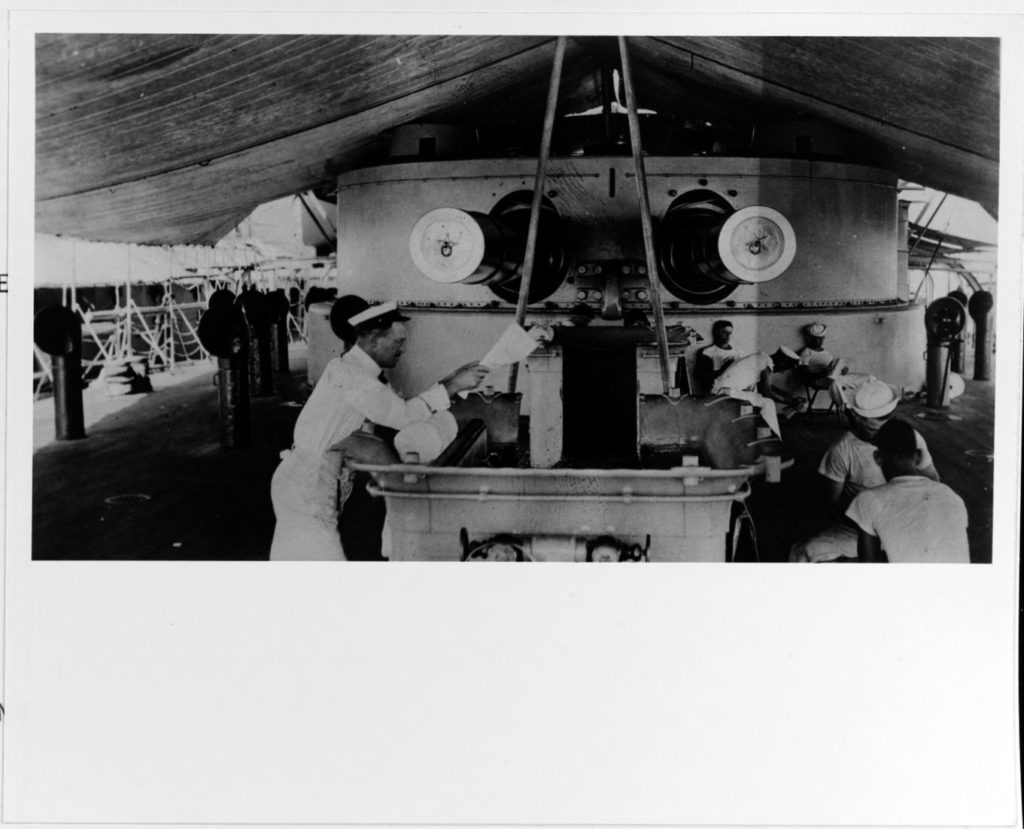 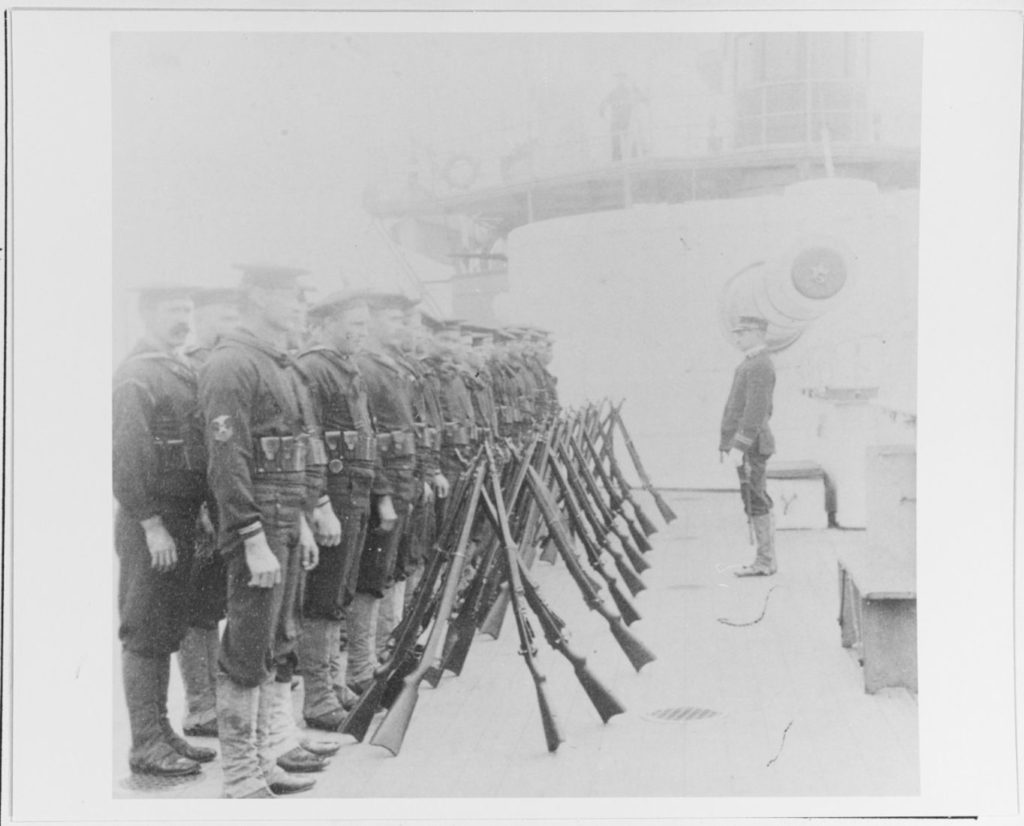 Note from Karl; Maybe they were getting ready deployment to Philippine-American War.

The USS Monterey changed home port in 1917, this is copied from Wikipedia:

The old monitor departed Cavite 13 November 1917, and was taken in tow by collier Ajax on the 15th. She proceeded by way of Guam to Pearl Harbor, arriving 19 December. Assigned as the station ship for Pearl Harbor Naval Station, the Monterey remained in service at the submarine base until she was decommissioned 27 August 1921.

Here are four more images of the life and career of this USS Monterey Naval History Heritage Command URL, click here or copy and paste it:

In the Navy were several ships with the name Monterey but we can be certain that the bell at Ford Island came from the USS Monterey BM-6 because it got the date 1992 on it. 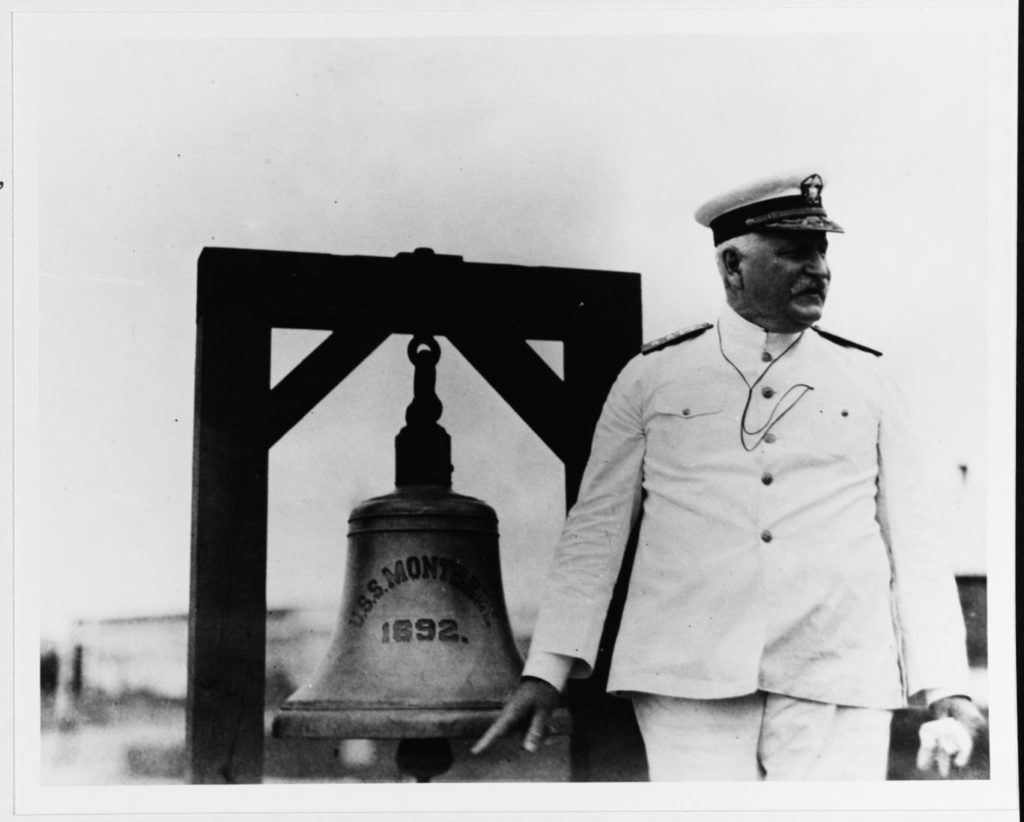 Note from Karl: I guess this was the first step for the USS Monterey ships bell to end up on Ford Island. 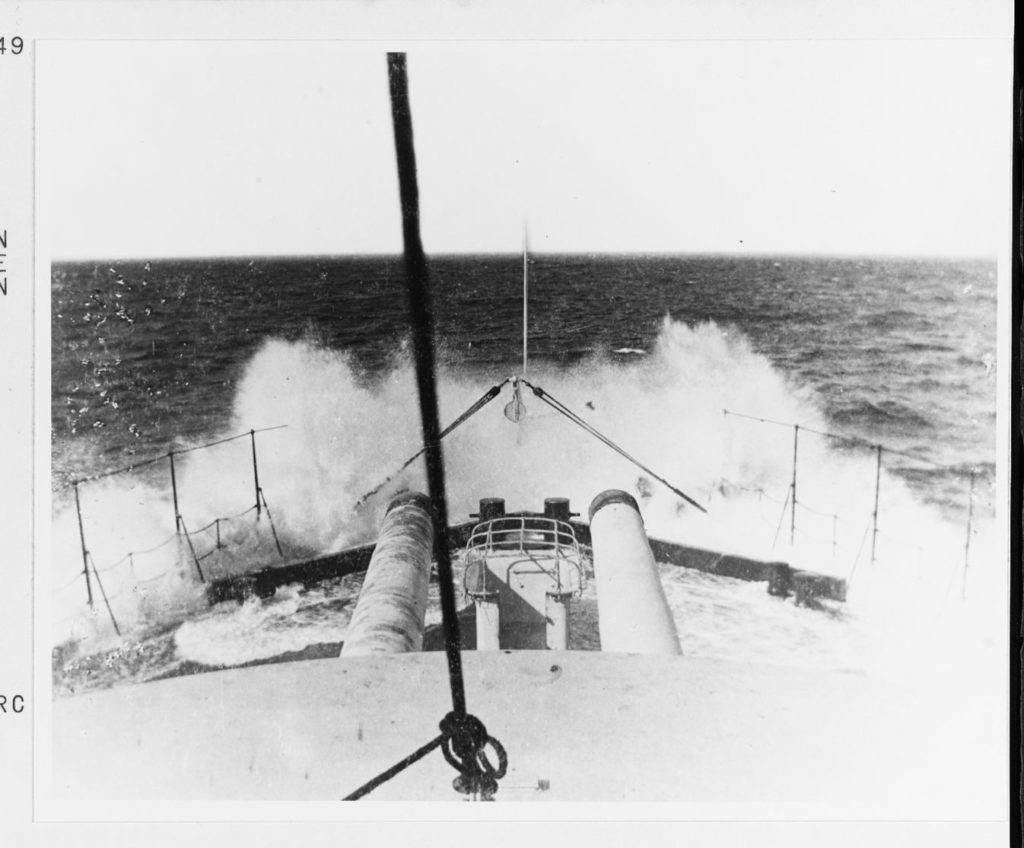 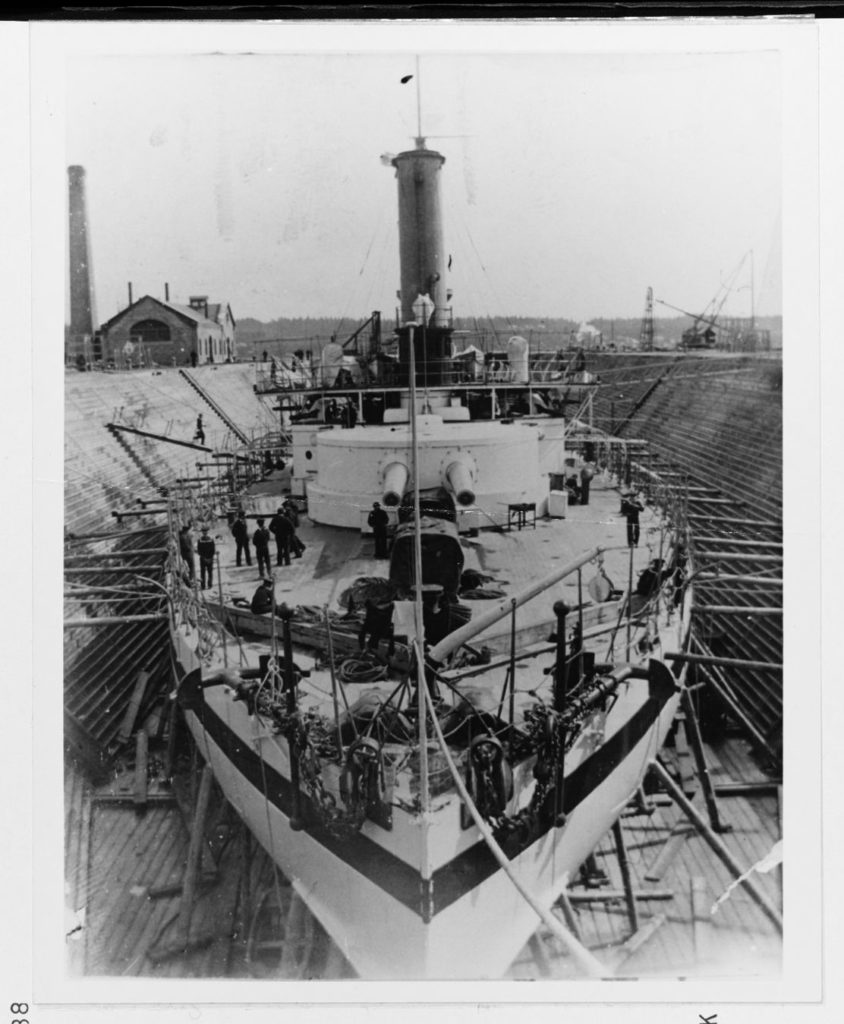 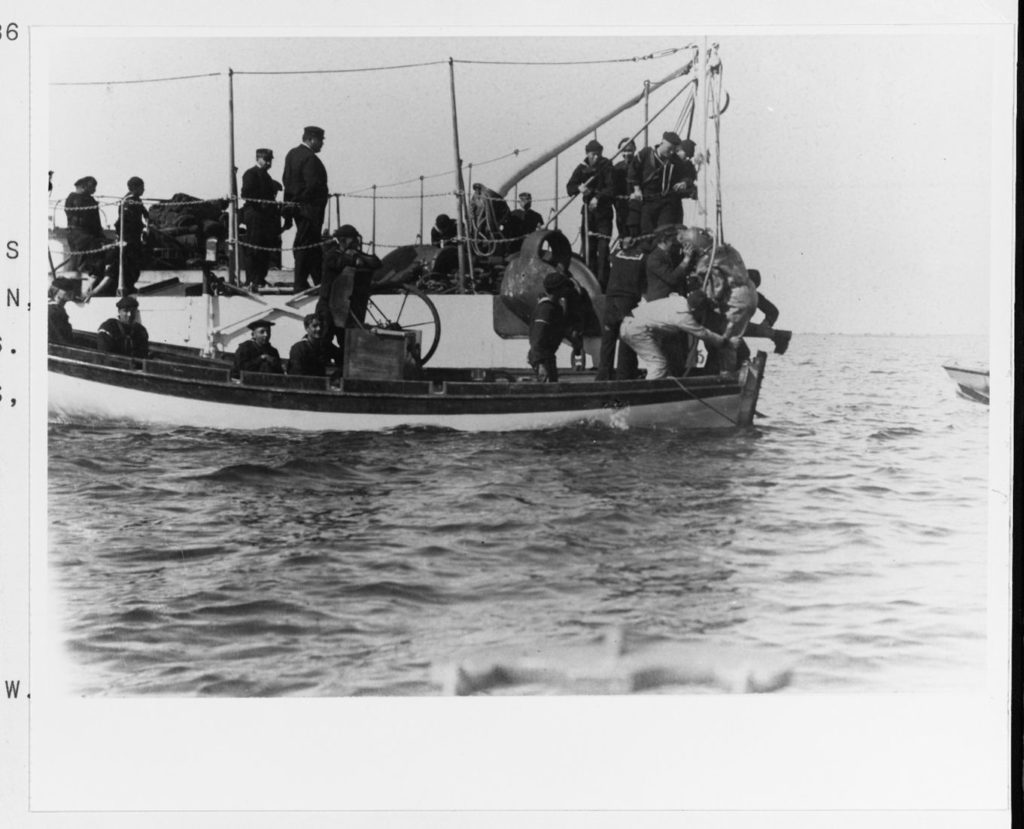 Note from Karl: It seems then as now we do not always get the best equipment right away. It seems that job required a bigger boat with a ladder. This image is very special to me. I was a Hardhat Diver and trained in that rig.