Battery Warwick Guns are not forgotten. 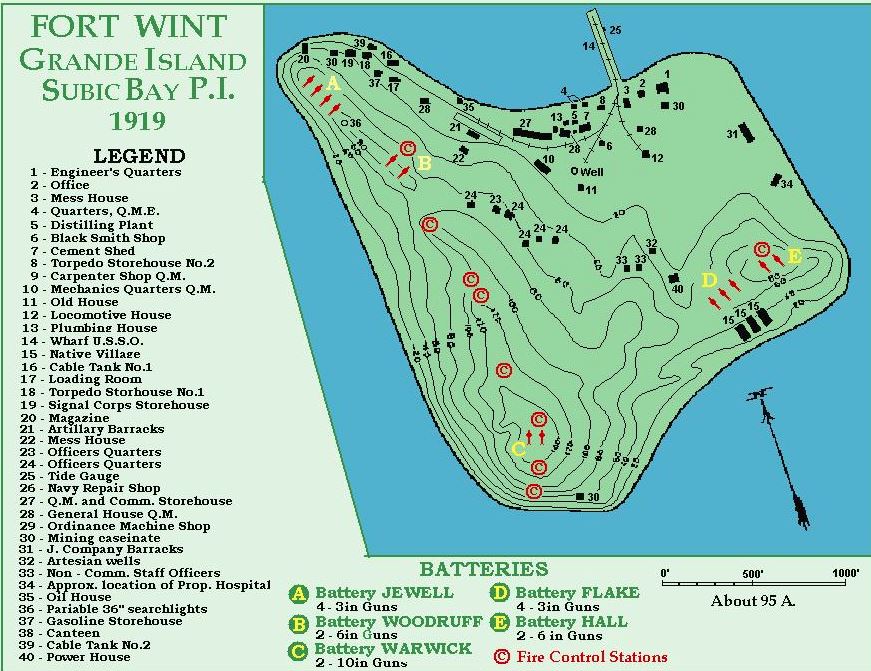 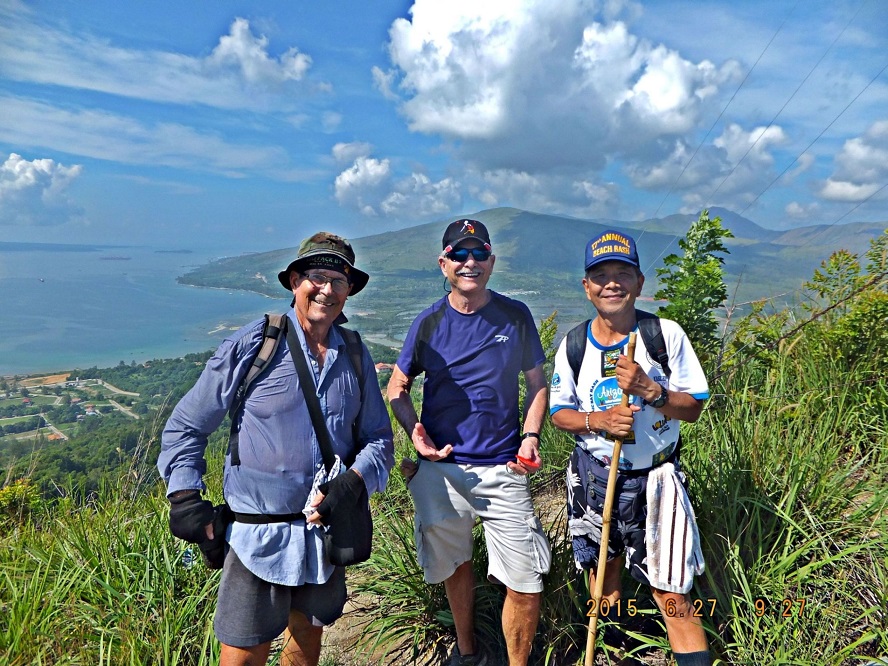 Zc278. Charlie Moser visited me at Subic Bay on the 15th of July 2018. Here we are on Mt. Cayuyag, north end of the bay of Subic Bay, and we see Grande Island about thumbs width left of my head. The other shipmate is a Korean-American and we all served in the Junk Boat Fleet (meaning the diving and salvage Navy). This is a 2015 image.

He stated that he is invited by the Fort Casey Park service to attend the 50th anniversary of the ‘Big Guns” the two 10 inch guns from Battery Warwick on Grande Island, the former Fort Wint, arriving at Fort Casey Park.

Why him? He was one of the Navy volunteers who labored 3 weeks to take those two guns apart on Grande Island for shipment to Washington State. He may be the last one alive who did it!

He stated he wants to go to Grande Island to take some pictures of Battery Warwick for that event. I told him that the resort on Grande Island is closed and no boats are going there.

We went to the boat landing anyway; by the way that was the former Officer Boat Landing during our Navy days. We were lucky and met the on-island resort manager and he said it would be ok to visit. So we have a plan to visit Grande Island on Friday the 20th July 2018. Charlie and I are long time ship mates and served together in 4 different commands. I always was fascinated that he was the one to help dismantle the two 10 inch guns. 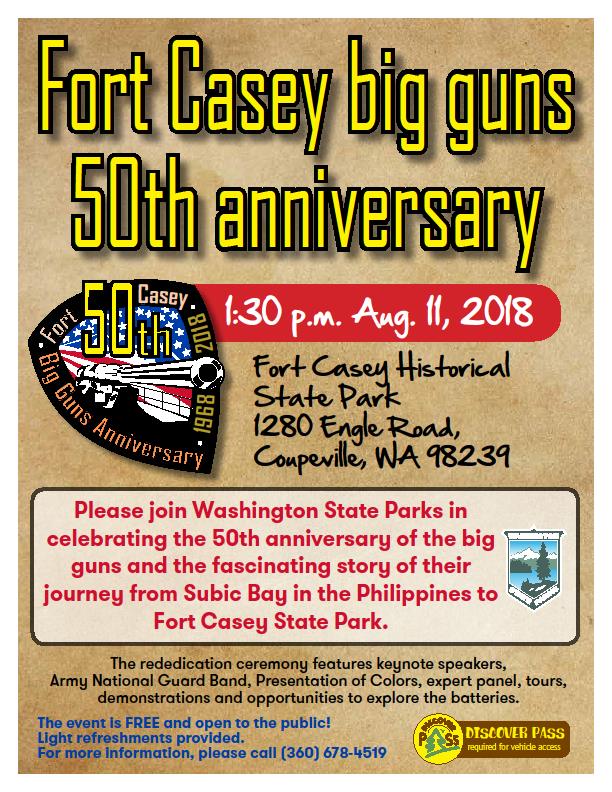 From this URL, I copied the text following here, click here for the link!

The event will take place at 1:30 p.m. Saturday, Aug. 11, at Fort Casey Historical State Park, 1280 Engle Road, Coupeville. (Driving directions. The event will include displays and activities, park tours and a keynote address by Rep. Norma Smith, R-Clinton. Visitors also may tour the Admiralty Head Lighthouse and enjoy a picnic or hike at the park on event day. The event is free, though a Discover Pass is required for vehicle access to the park.

The guns at Fort Casey have historical significance in that they are the only 10-inch disappearing guns in the United States and two of four left in the world. Disappearing guns, a technological marvel of the late 19th Century, were designed to recoil behind their concrete emplacements after firing. The guns at Fort Casey weigh 125 tons apiece. Fort Casey is one of three late 19th century military forts that made up the so-called “Triangle of Fire” to defend Puget Sound.

The program this summer will follow a similar format to that of the original dedication ceremony, which took place on Aug. 11, 1968. The event will include the presentation of colors, music by the Army National Guard Band, a panel discussion with experts who helped to bring the guns to Fort Casey and demonstrations of the communications tools involved in using the guns. Light refreshments will be provided, and visitors can tour the guns on their own after the event.

The guns were made in the 1890s. They replaced two guns of the same model and vintage, which were used at Fort Casey from 1902 to 1942. The original Fort Casey guns and carriages were scrapped for metal during World War II.

In the late 1950s, after the fort had become a state park, efforts were made to acquire two of the last 10-inch disappearing guns, from Fort Wint on Subic Bay in the Philippine Islands.

The acquisition took a decade to complete and was fraught with financial, political and logistical complications. Ultimately, the Washington State Legislature voted to finance the transfer, which proved perilous when the guns were tossed about the ship San Francisco during a freak storm at sea.

The 1968 ceremony included Gov. Dan Evans, Sen. Henry “Scoop” Jackson, the Coupeville Lions’ Club and military officials and industry captains. During his speech at that dedication, Sen. Jackson called the acquisition, “a story of perseverance.” 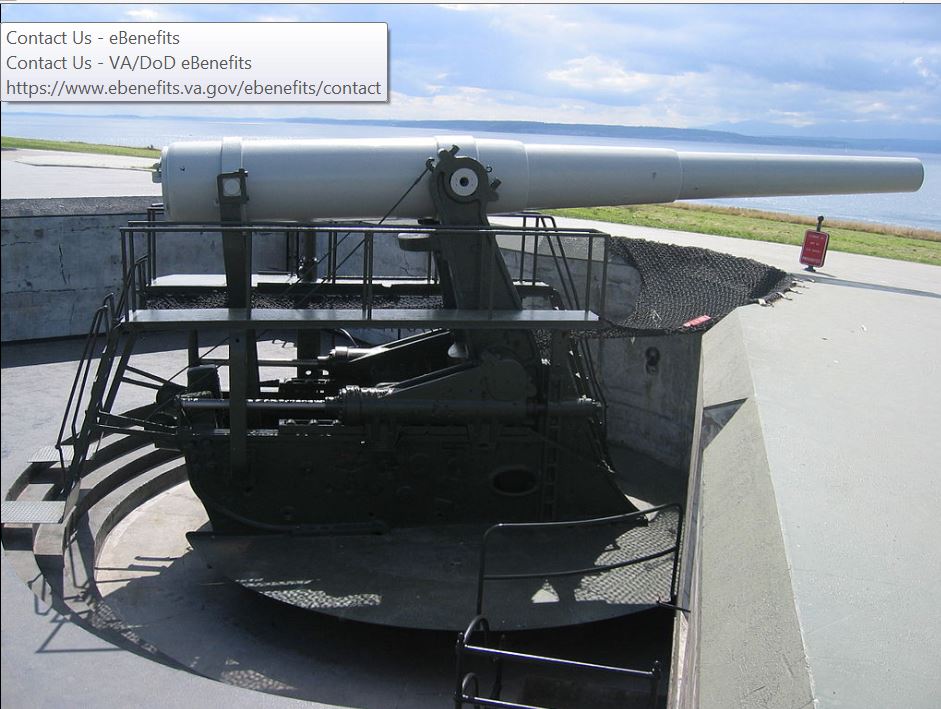 To read the story, go to this URL, click here! All 8 pictures are from this website. Photo courtesy of David Hansen, Photographer, World History on Line and Washington State Parks and Recreation Commission. 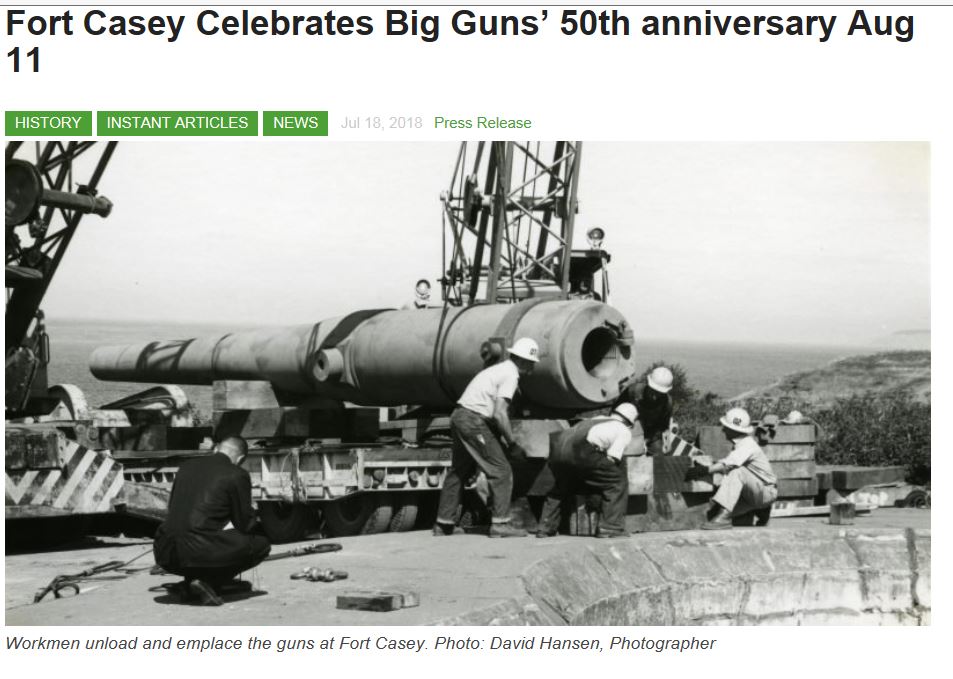 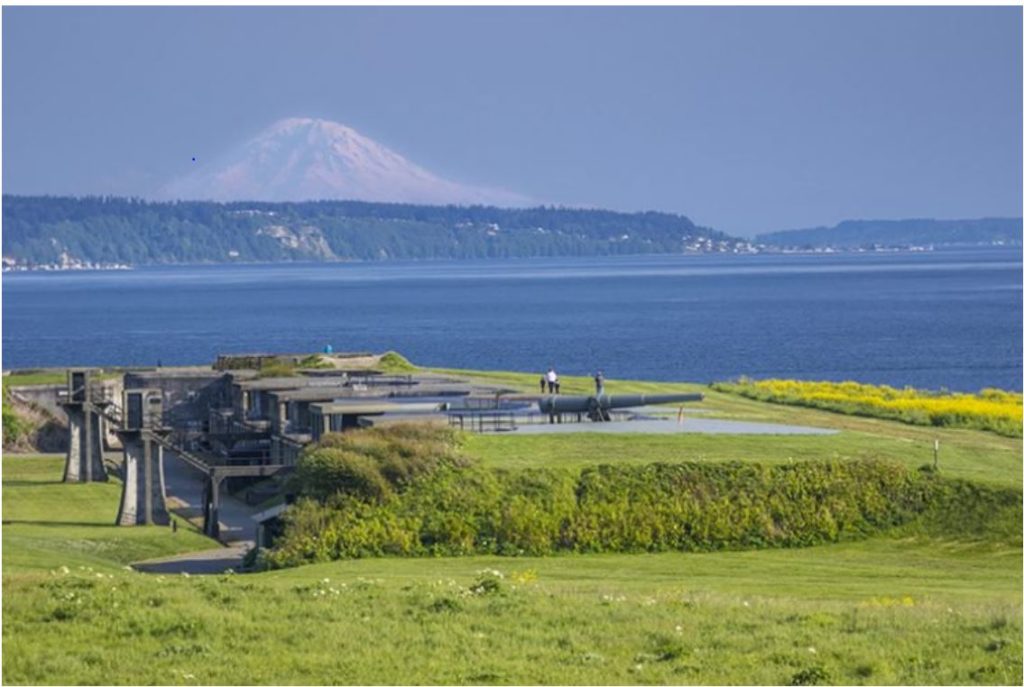 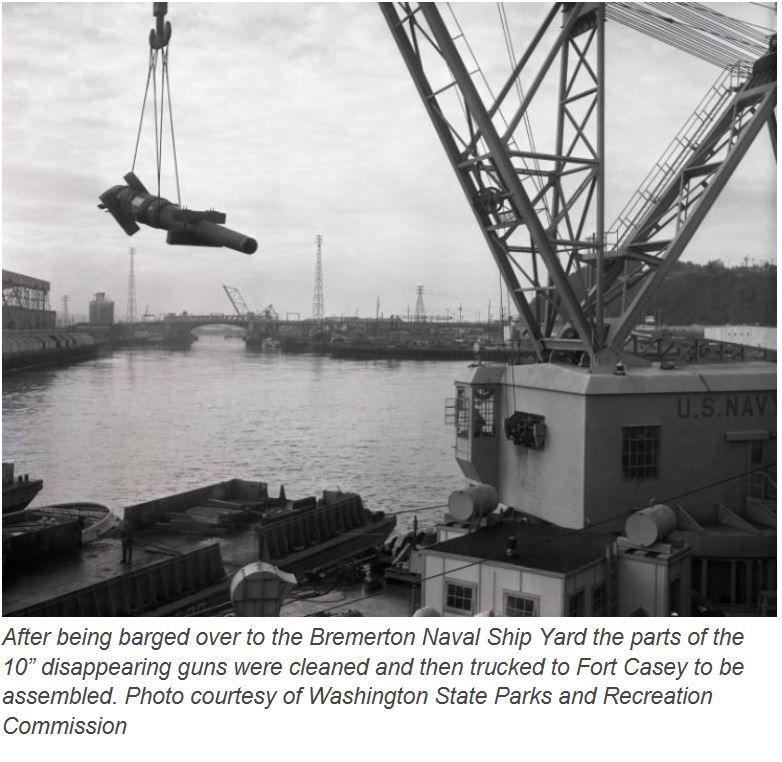 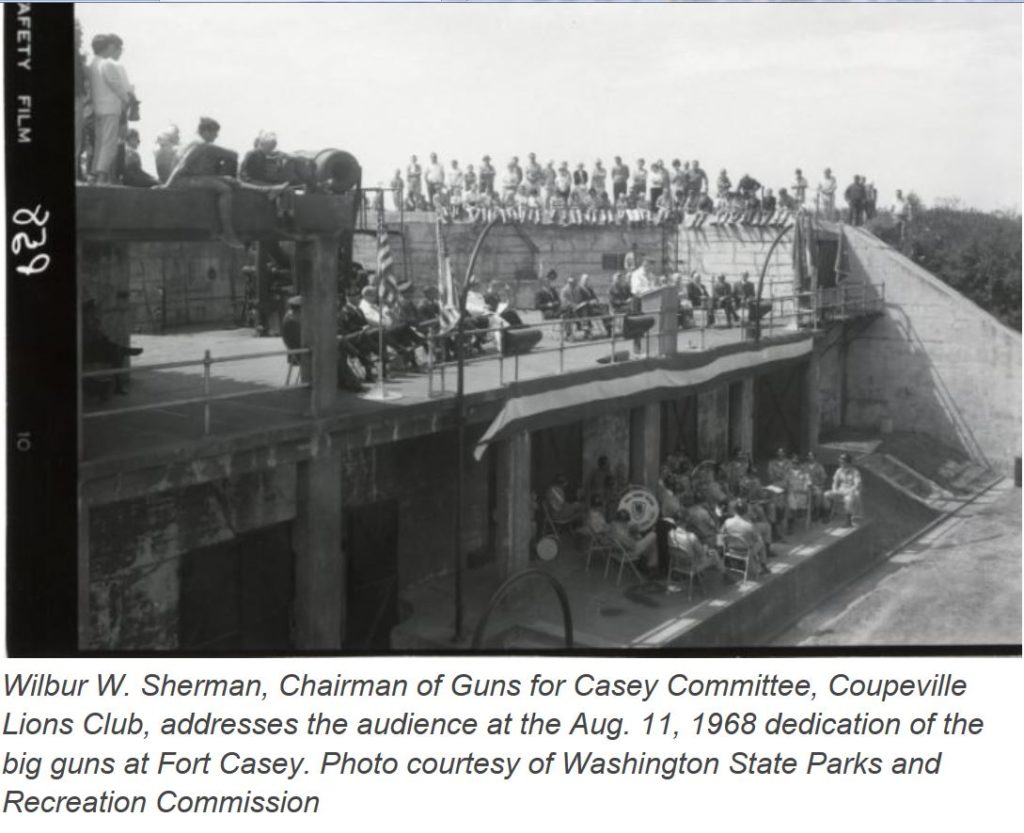 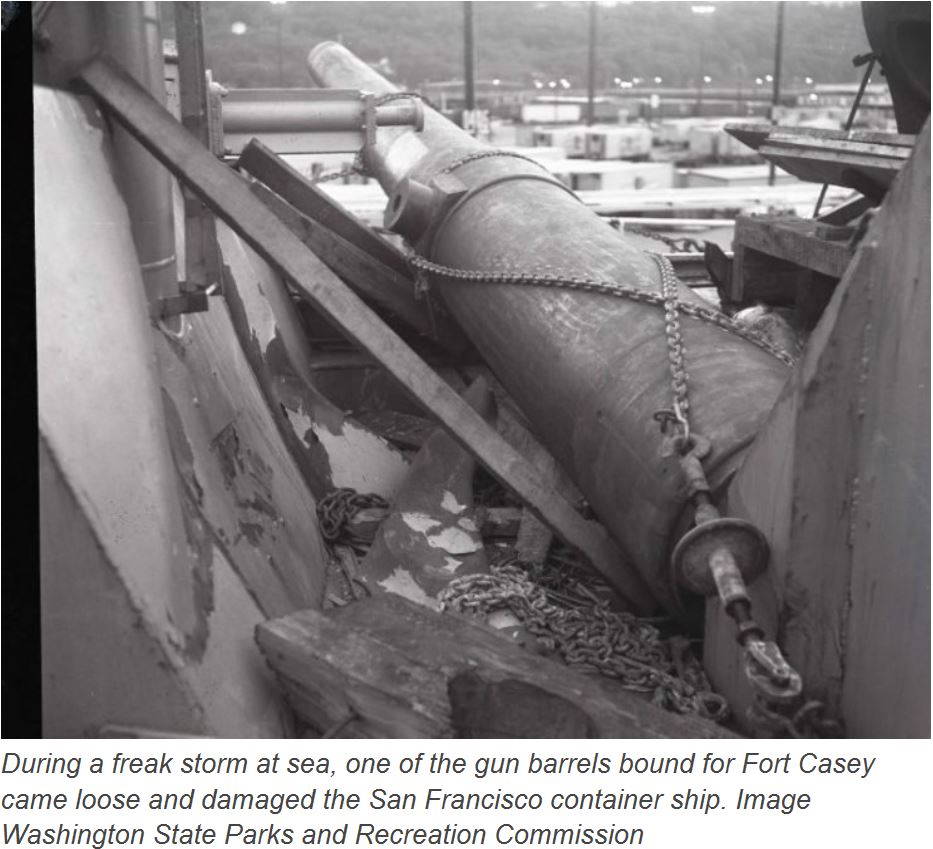 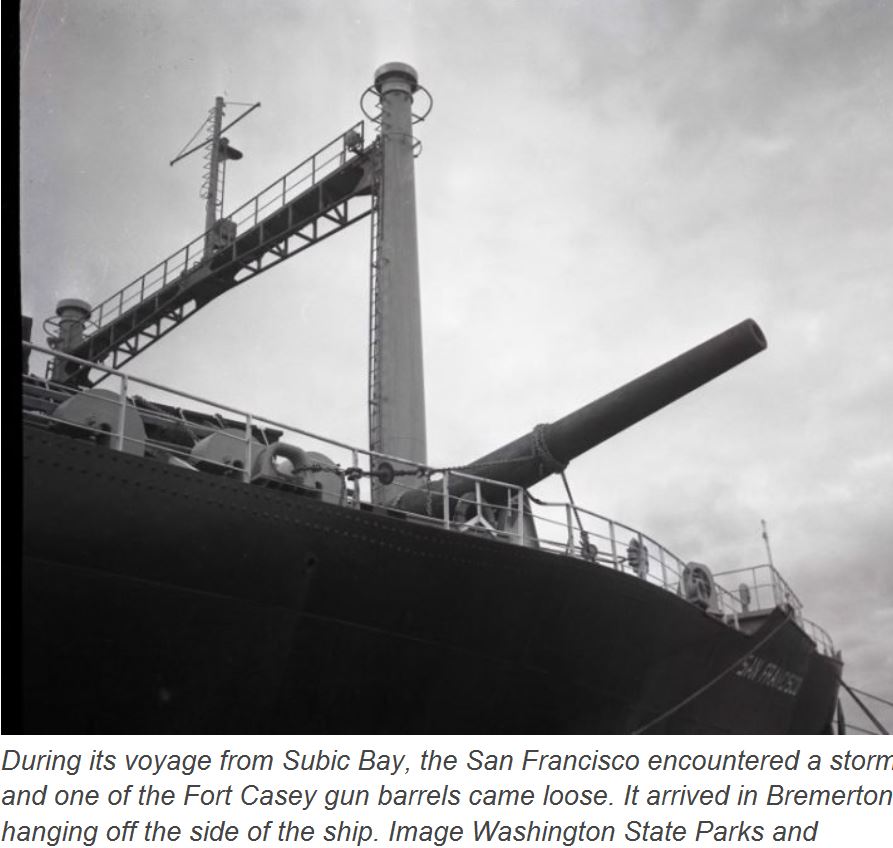 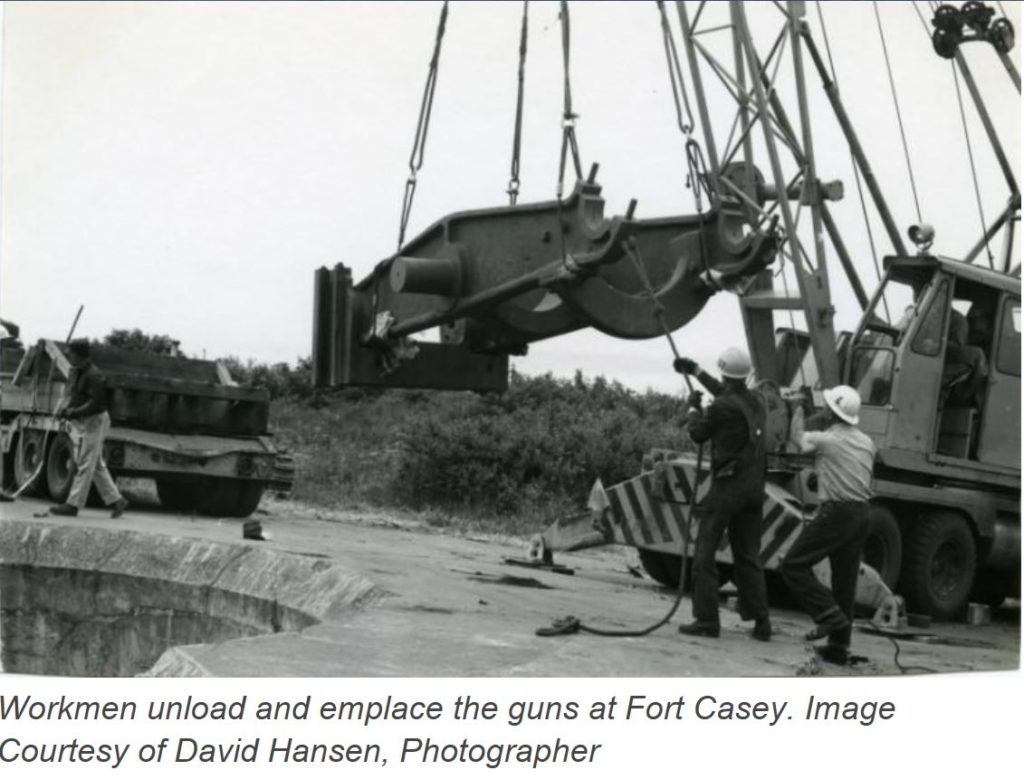 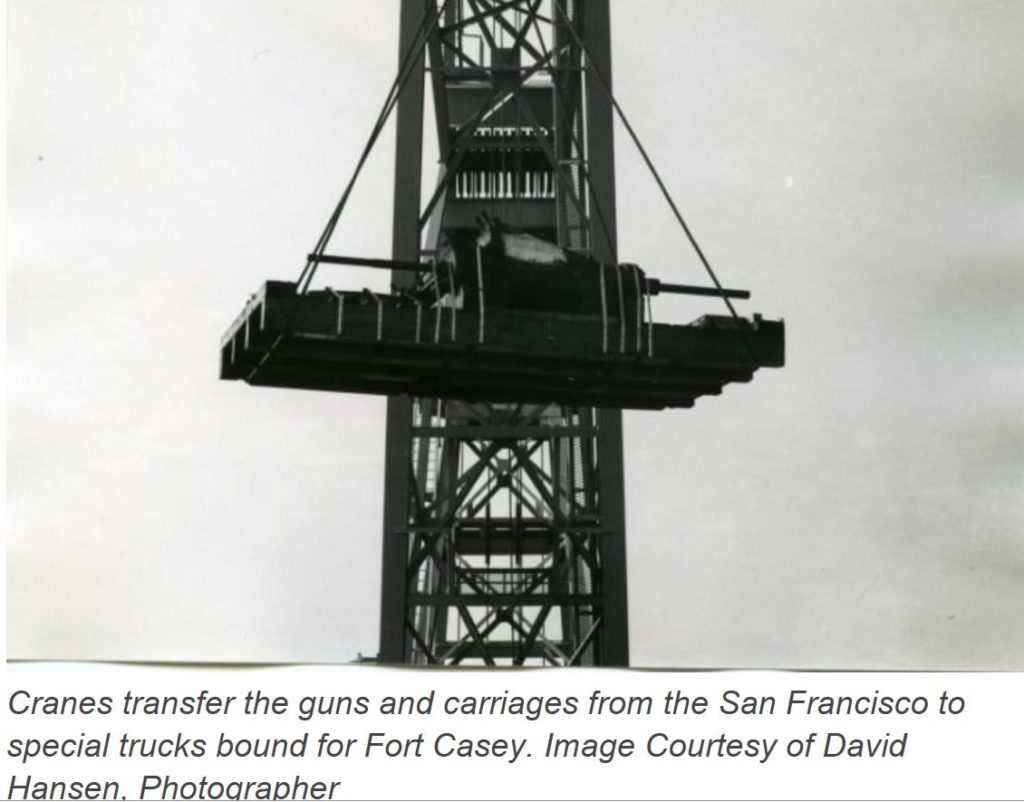 Because of the Fort Casey Big Guns 50th Anniversary we visited Grande Island and took some pictures. My friend Charlie Moser helped take the 10 inch guns apart 50 years ago and will join the 50 year anniversary at Ft. Casey State Park. The first resort on Grande Island failed, my opinion, and is now controlled by new investors from Mainland China. The new General Manager, a 2nd generation Filipino-Chinese, David Du, took us around. I contribute much to a web page of Fort Wint on Grande Island and our hosts were very much interested in our history about this island and this battery. 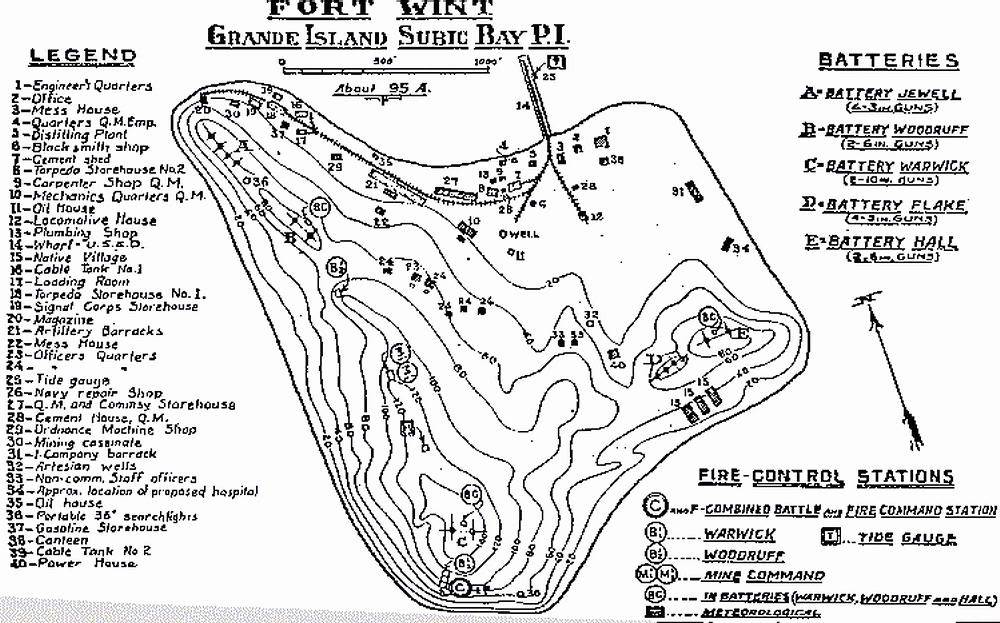 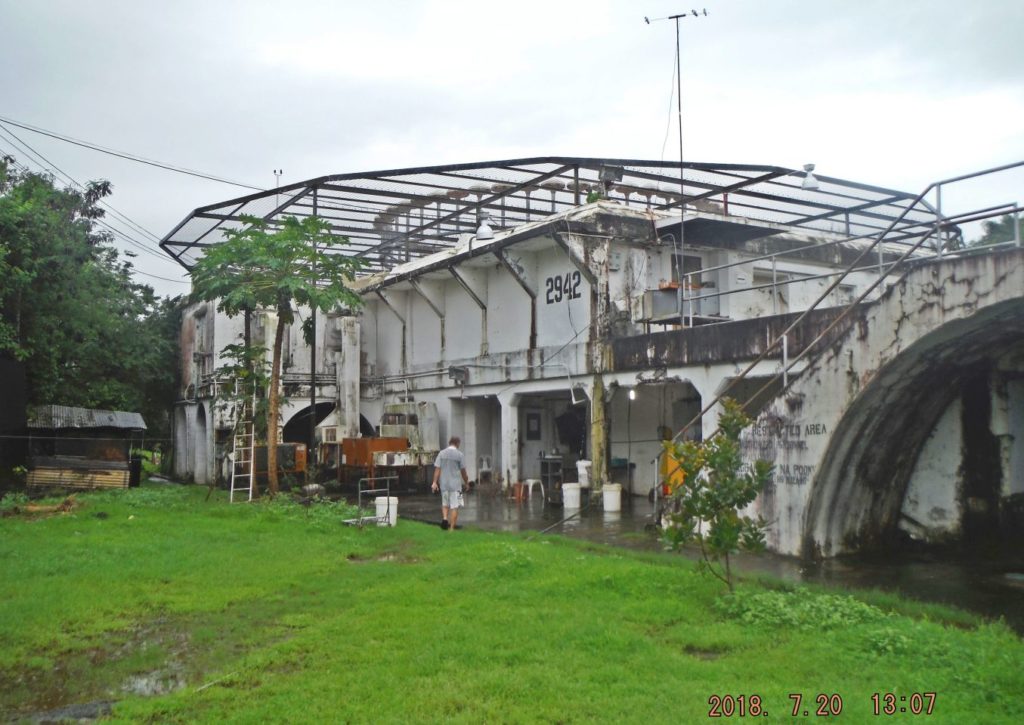 Zc295. This is the rear of Battery Warwick on the 20th July 2018. On top is a radar device, it is being used by the Olongapo Air Port and we see the operator returning to his watch station. 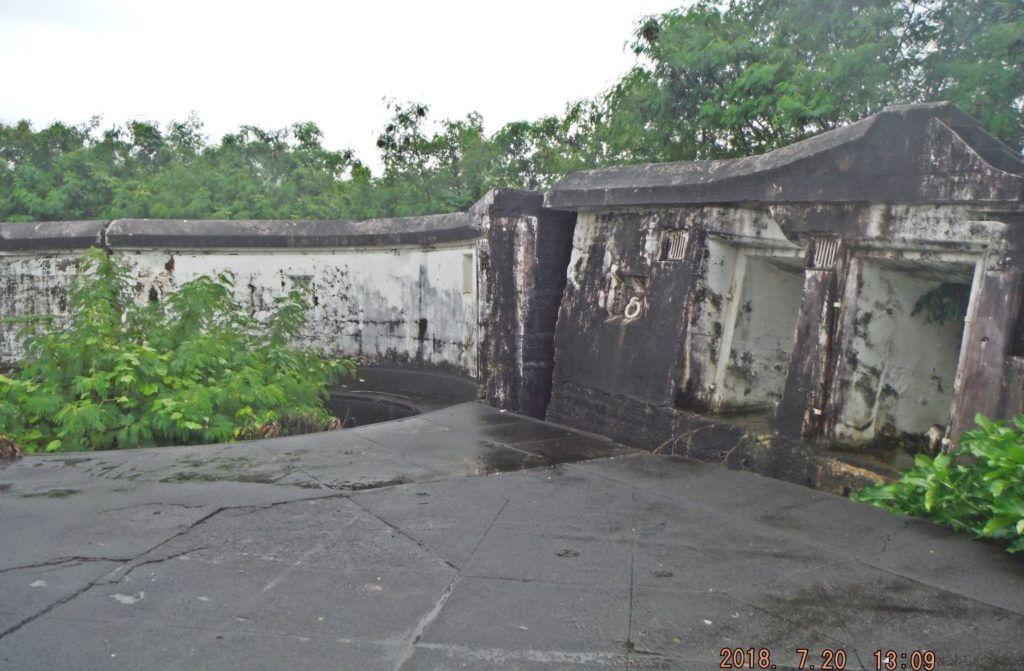 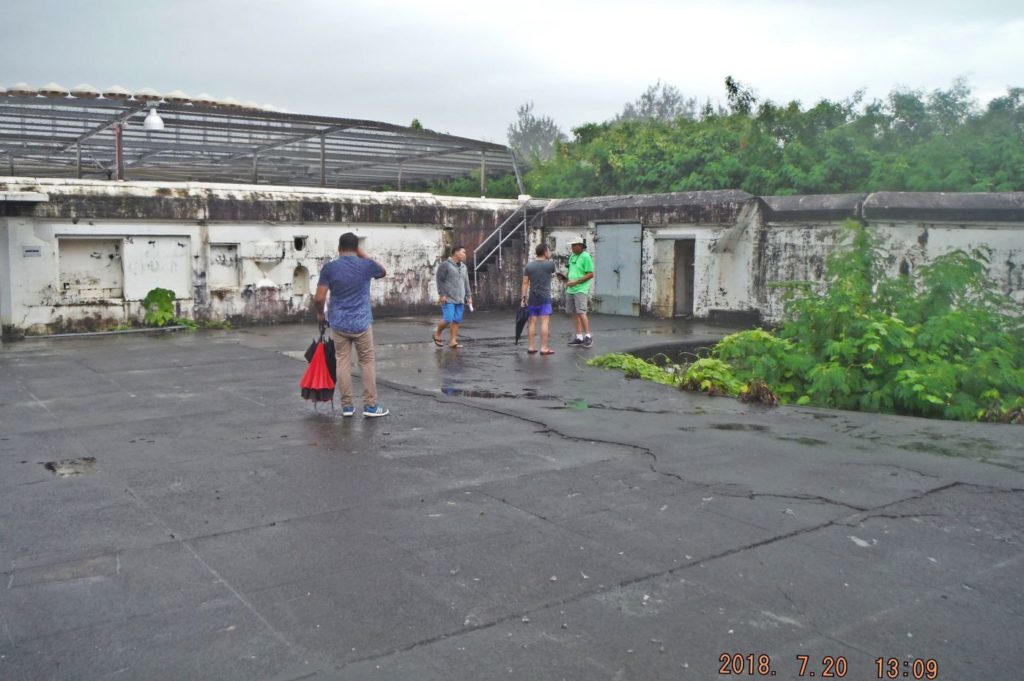 Zc297. We are looking at the radar installation on top of Battery Warwick from #1 Gun area, the people are from right to left: Charlie Moser, David Du-general Manager, by luck he was on the island today, Chris the son of the General Manager and the last person at left is the on-island manager Christopher Andrada. Charlie Moser helped dismantle the guns for shipment to the Fort Casey Washington State Park 50 years ago. He volunteered for the job and it took 3 weeks. 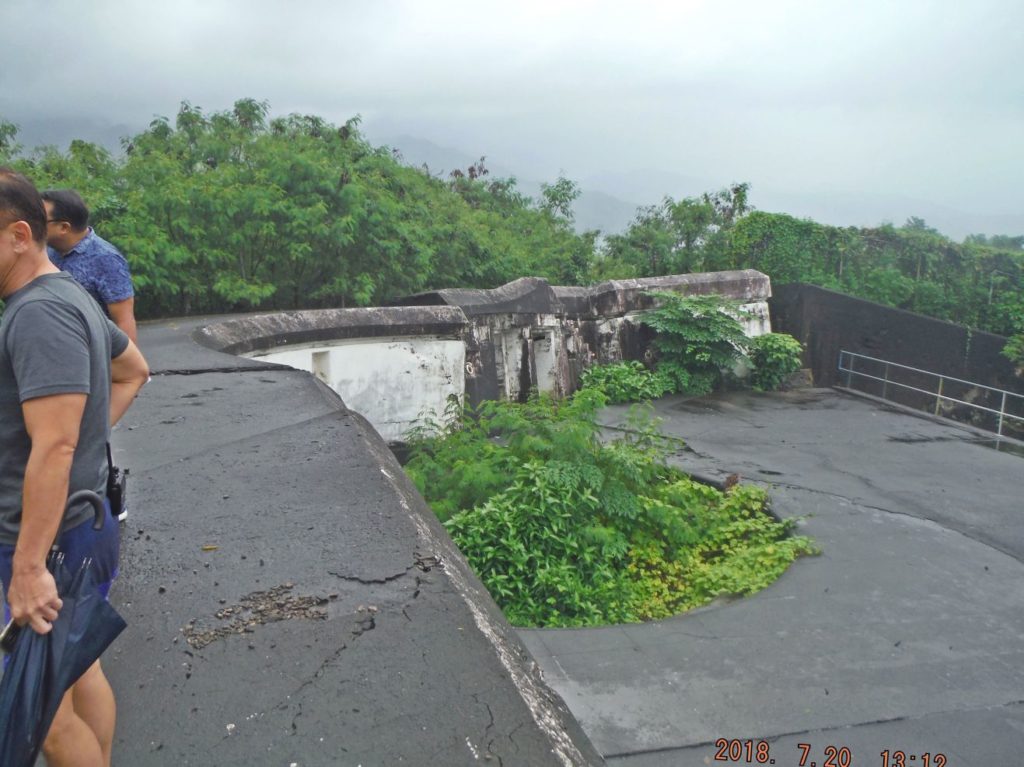 The Eve before the 50th Anniversary at Fort Casey

Rick Slater says: Our leader Steven Kobylk put in hundreds of hours of hard work getting this set up and a number of enthusiastic volunteers helped paint the guns and spaces to commemorate the 50th anniversary of the disappearing guns being installed at the fort, in 1968.

Note from Karl: Rick Slater is one of those volunteers, he visited us in the Philippines, and he uploaded about 25 real nice images to this Coastal Artillery Facebook page and made the quoted comments, CLICK HERE: 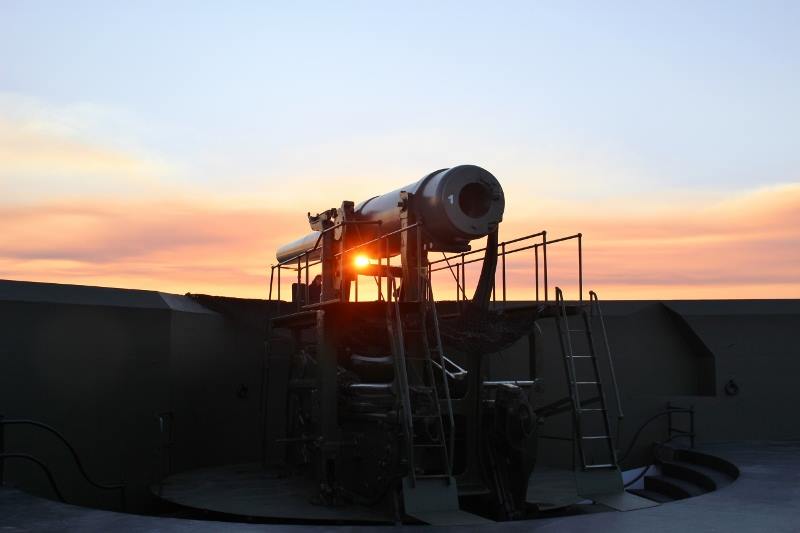 Zc517. Ft. Casey, 10Inch guns, at eve of the 50th Anniversary, received from the Philippines, picture from Rick Slater, a park Volunteer. 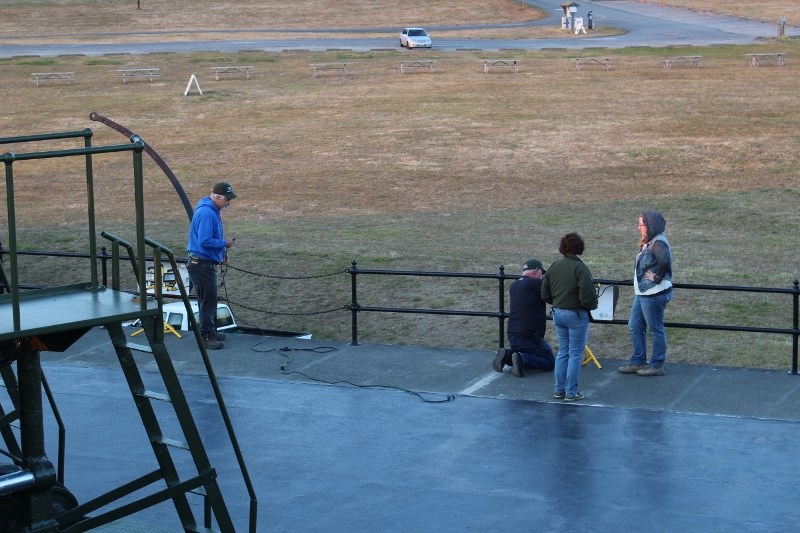 Zc518. Ft. Casey, 10Inch guns, at eve of the 50th Anniversary, received from the Philippines, picture from Rick Slater, Steven Kobylk, another volunteer and leader is at work. 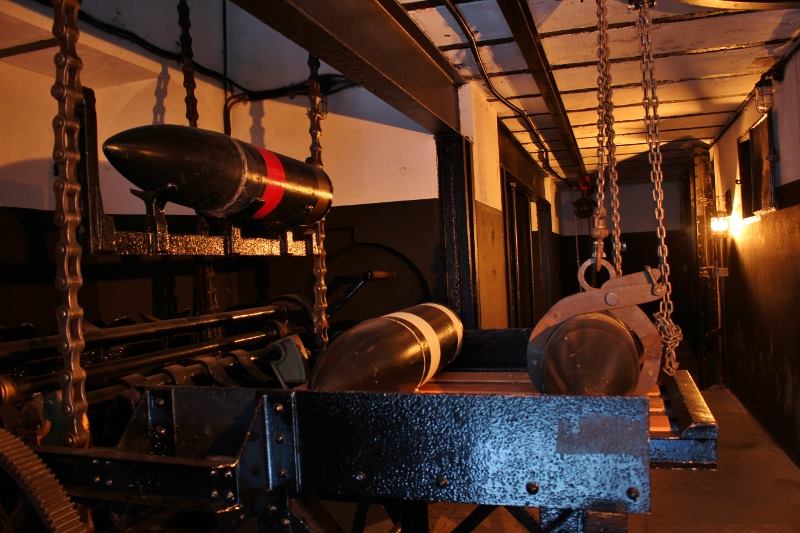 Zc519. Ft. Casey, 10Inch guns, at eve of the 50th Anniversary, received from the Philippines, picture from Rick Slater, the upper end of the shell hoist by lamp light.

The words of Volunteer Rick Slater:

As part of the weekend activities at Fort Casey State Park (for which I am a volunteer), the fort was lit up last night with several kerosene lamps to give the feel of the time before electricity was installed at the fort. The sky cooperated with a beautiful sunset. Our leader Steven Kobylk put in hundreds of hours of hard work getting this set up and a number of enthusiastic volunteers helped paint the guns and spaces to commemorate the 50th anniversary of the disappearing guns being installed at the fort, in 1968. The official ceremony takes place today. The guns were brought over from the Philippines, Subic Bay, which was a large American naval base at the time.

2 thoughts on “Battery Warwick Guns are not forgotten.”